Reef to Reef wrapped up with a run down the famous Bump Track!

After four solid days experiencing the two wheel delights of Tropical North Queensland, the Reef to Reef riders joined up with their one day counterparts from the Triple-R for a mad dash from Mt Molloy to Four Mile Beach and the welcoming arms of Port Douglas.

Leading the charge down the Bump Track and along the golden sands to the finish line was the Giant Australia Off Road pair of Brendan Johnston and Jon Odams, defending their title and cementing their place as the masters of four-day MTB stage racing.

For Johnston and Odams it was another flawless exhibition of controlled, strong pairs racing and for Johnston, remarkably his seventh Epic Series win in a row.
“It is a great stage that one, starting up in the outback, dropping down into the rain forest and finishing on four mile beach. It is incredible. We had a really good run and the conditions were perfect, we even had a tail wind to bring us home over the last 10km or so. We rolled in really well and it is such a scenic way to finish the four days.”
“Jon and I took out the inaugural title last year, so two years in a row is pretty cool and what a place to finish it off. You certainly like to defend a title. I have won a few of these now and it is cool to turn up and do well, each time against really solid fields. This week we have had a reasonably comfortable win, so it has been good, but it is a challenge and I am very proud of Jon and myself that we keep turning up and riding well together.”
“For me this is the seventh Epic Series races in a row over a few years. It is a great record because at these events were getting the best riders in the country and now being able roll into pairs racing and still getting the wins is incredible,” Johnston said.
Odams was all smiles crossing the finish line, after another remarkable four days working in perfect synch with Johnston.
“About 5km in we were just going over a couple of pinches and we gave it a little gas and no-one else did so we thought we would just roll off some turns and we got a gap and kept going. A stage like this is about making to the finish and not crashing or breaking anything which can happen easily especially today were there was room to come unstuck. I gave the Bump Track a little bit today. Brendan always gets a bit worried when I get a bit silly on the descents, so I had to tame it down a little bit,” he laughed.
“Reef to Reef is my favourite of the Epic Series so I can’t fault it. Have a look at the finish line. It doesn’t get much better. It doesn’t get much better than racing along the beach to finish it off and a big tail wind as well.”
“This is our third pairs race together and it is three wins, so it is going well. We work together well, we don’t have to talk too much and we understand how each other rides because we have raced against each other a lot. Our bikes and the equipment we use is all the same which makes it a hell of a lot easier for us to get it done. We will be doing Cape to Cape as a pair and The Pioneer as well, so we will see what happens. It is going well so far.”

Reef to Reef debuntante Tas Nankervis was in a class of his own in the Solo Males and with his extraordinary talent dialled up to the max, he close out the week with another outstanding performance.
“I just wanted to go as hard as I could. The first bit today I actually had four of us swapping turns and we ganged up and made our team but on the steep, undulating fire road bits I got away and I was just trying to catch the lead pairs.There were no dramas this week, not even a stick in the wheel, nothing. It was an awesome time and nice to be riding against the other elite riders who are mates of mine.”
“To win the solo is icing on the cake, it has been an all round great week. This is my first Reef to Reef and it has been unreal. It is very different compared to the other Epic Series races and it has an element of adventure race about it with all the different areas we rode through. It was an awesome experience,” he said.

Reef to Reef class clowns, the VP Brothers (Paul and Neil) celebrated their third place in the Open Male Pairs and everyone else’s achievements in their own inimitable style.
“We didn’t realise the finish chute was a little bit to the right, so we found ourselves in family traffic and among the picnickers. I went for the arch, Paul went back for the timing mat. Paul has gone that way, I’ve gone that way but we got there in the end.”
“It was an awesome stage. It was fun. That Bump Track has a lot of hype and a lot a ‘be careful’ about it but it lived up to its reputation. It wasn’t as scary, but it was just fun. It was woohoo. Sitting here in Port Douglas it is hard to look around and think ‘I would rather be back in Melbourne’. This is a really strategic finish by the organisers, you finish on a fun note.”
“The event was actually very challenging but at this stage I have sort of forgotten that. Looking at the waves it is ‘What pain?’,” Neil said.

Off the bike for six months, Paul van der Ploeg was not only caught up in the moment but genuinely thankful for the support and the family and friends who helped him resurrect his riding career.
“It was good to ride with this goofball again. We trained together as kids and we have taken different pathways for a few years, but this is just a bigger version of us playing in the back yard. The backyard of Australia, the great Tropical North. Coming back on the beach were just flying and you could hear the buzz of the tyres as we dodged a few people, but we made it here safely.”
“I didn’t know if I was going to make it to the end and I really have to thank Neil for nursing me through from start to finish. I am stoked and just happy to be at the finish really,’ he said.

The Mixed Pairs went to ever smiling Holly Harris and brother Michael, who have racked up two Epic Series Mixed wins and are now determined to clean sweep 2019.
“My first impressions of Reef to Reef are wow, my goodness,” Holly said. “Is this real and did we just ride in on the smooth beach. I was thinking Pump Track and I didn’t understand but it was actually steep descending on fire roads with heaps of water bars and loose corners. It could definitely bring you unstuck if you had an ego out there. I love to show off, but I took it a little bit easier. So much fun.”
“I am loving the Epic Series, the events are always so well run, immaculate to the dot. Everything is so easy which makes the racing so enjoyable because you are not stressed. I loved Tropical North Queensland, the ocean is so blue, it is magnificent. Everything is perfect, the weather, the coffee shops…I literally can’t think of anything to make this better.”
“We are 100 percent doing Cape to Cape and we are even contemplating The Pioneer, so watch this space,” she declared.

Reef to Reef really embraced three time World Superbike champ Troy Bayliss and made him one of its own. It was obvious he was feeling both the pain and the love generated by the event.
“Today was actually a pretty nice day. I was a little lethargic this morning and it took me about 25km to get going and then from halfway I felt good. So, I am leaving with a smile on my face and very happy. It was a great week for everybody and I would like to thank everyone concerned and everyone who took part in it.”
“My wife and myself, we came up here and had a lovely five days. It has been great. It is an unreal event, beautiful scenery and some tough riding. I have really enjoyed myself and made some nice friends. Look at it, it is winter and it is a great place.”
Fox and Racoon (Anna Beck and Briony Mattocks) had a few minor gliches over the four days but nothing insurmountable and they continued on their winning way, stitching up the Open Women’s Pair while catching some glorious sunshine.
“I am getting all these photos from home of frost and snow in Sydney and I am up here getting a tan,” Briony laughed. “It is always a tough race and you end up racing all the people around you, so we were racing the mixed pairs and a lot of the master’s men, so it was a lot of fun. On stage four is always good to pop out on the beach but then there is a brutal time trial to the end. It has been a great four days and we are really happy with the win,” she said. 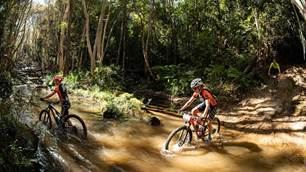 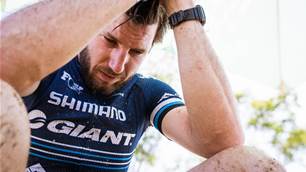 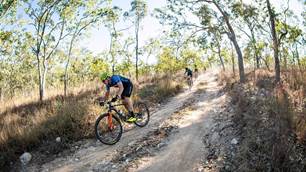