More action and updates from Matt Rousu at the Mt Ste-Anne World Cup, this time from Downhilll Qualifications and XCC

Click through the gallery above for all the action.

It was Friday fun day here at Mont Sainte Anne, the morning dawned fairly overcast but by lunch time it was a beautiful, hot and humid blue sky afternoon. Downhill practice claimed some big scalps this morning, Loris Vergier and Loic Bruni both crashing out this morning and will not race tomorrow.

Dean Lucas had a huge crash at the bottom of the big rock slab, injuring his knee in the process, he managed to ride in quallies and make it through to tomorrows final. Connor Fearon had a crash yesterday and injured his wrist, he managed one full run this morning but couldn’t compete at the level needed to qualify. Aussie Matt Empey sustained a concussion and also couldn’t ride today. Cassie Voysey had a flat during her qualifier but still managed to roll into 13th, hopefully you’ll see her on the hotseat during Red Bull TVs live coverage. 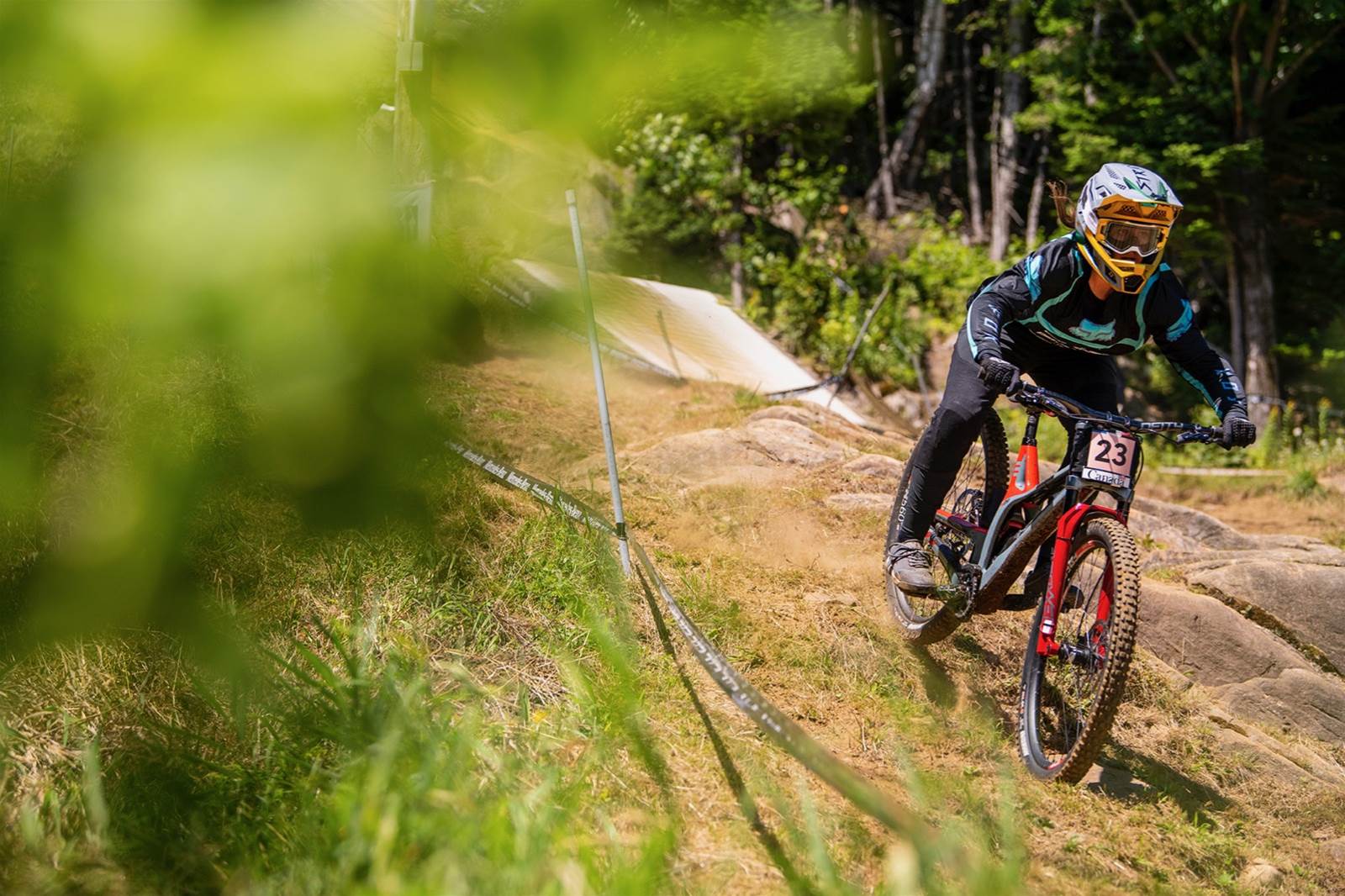 Both Elise Empey and Connor Mielke had issues during their runs but will clean them up tomorrow to try and slide into the top ten juniors. Our usual suspects Remy Meier Smith and Oliver Davis made it into the finals with Mario Baldwin sneaking into the last remaining spot. Nice! Our other juniors had a tough couple of days, I don’t think I saw anyone with clean gear at the bottom of the hill, either crashes or mechanicals taking their toll. Up the pointy end it was the home county hope Finn Illes on top followed by the usual suspects, Minnaar, Pierron, Brosnan and Kerr, it’s shaping up to be a good live show both here and on Red Bull TV. Vali Holl took top honours today but Myriam was close on the split time halfway down before an incident put her 18 seconds back. These two are in a league of their own on this track, some 14-15 seconds clear of the next best riders Hrastnik and Hoffman. Special notes on who to watch on the live stream (besides the top 5) are Sam Blenkinsop, the man is just pure joy on a bike. Hugo Frixtalon was upside down over the big hip yesterday, he has too much style. Aaron Gwin is looking super solid here, he seems stuck to the ground over the rough stuff All out in XCC

The afternoon was mayhem, the XCC is just a blur for us photographers. Running from one spot to the next, setting up your next shot, getting exposure right and already thinking about where to move next while you’re taking photos of the best riders in the world with just a two minute window. Yes it’s crazy… It was fun too, haha. The track was pretty mild with no technical features at all, just a couple of punchy climbs and short descents, a real lung buster course. As you may have seen on the live stream Bec McConnell rode a strong race, leading for a short while with a small group out the front. Jolanda Neff is pretty much back to her best form after a convincing sprint against the new kid on the block Gwendalyn Gibson and series leader Alessandra Keller.

The men’s was a much closer race with Luca Schwartzbauer leading for a majority. To be honest I didn’t even see the finish, a combination of bad marshalling and very poor access for my media credentials made a good finish line shot hard to get (Lesson learned for Sunday’s big show). I did see Filippo Columbo take the win over Ulloa (he’s back!) And Sebastian Fini. It was a fun but frustrating end to a great day here at MSA. Onwards to tomorrow! It’s DH Race day!!!!