After a dominant win at the opening round of the 2022 UCI Cross-Country World Cup in Brazil, Rebecca McConnell and the rest of the UCI World Cup circus moved to Europe, typically seen as the beating heart of World Cup racing.

Albstadt is in Germany, and is known for its climbing, with short and sharp descents. It's a popular stop for spectators too, although besting the huge crowds in Brazil will be a big challenge for 2022!

After a dry few days in the lead up, Friday afternoon's short track was cold with slippery mud - typical of European racing conditions. The Elite women would be racing first, and the top 40 were all in attendance.

The race kicked off with a bang but there was no decisive move for a few laps. Caroline Bohe was active at the front, Mona Mittenwalner was notably moving backwards, and Jolandan Neff quickly moved up the field, having started from the third row. Something needed to happen to get things moving, and with about 2.5 laps to go Bec McConnell tried an attack, after moving up on the inside of the left hander off the finish line straight.

McConnell took the inside suicide line right to the front of the race, putting the pressure on the field and getting it strung out. The result was a front group with about 5 main contenders: McConnell, Neff, PFP, Keller, Rissveds.

The race was on, and with Lecomte pulling out after a crash and Laura Stigger way back with a crash, there really was no clear answer on who could win. That said, Bec was still leading, but you can't bet against Pauline Ferrand-Prevot in a fast finish!

Coming to the line Bec had 1.5 bike lengths on PFP. Would it be enough? Bec made sure it was and despite a photo finish, her salute over the line showed she knew she had won it! PFP was second and Jenni Rissveds was third. 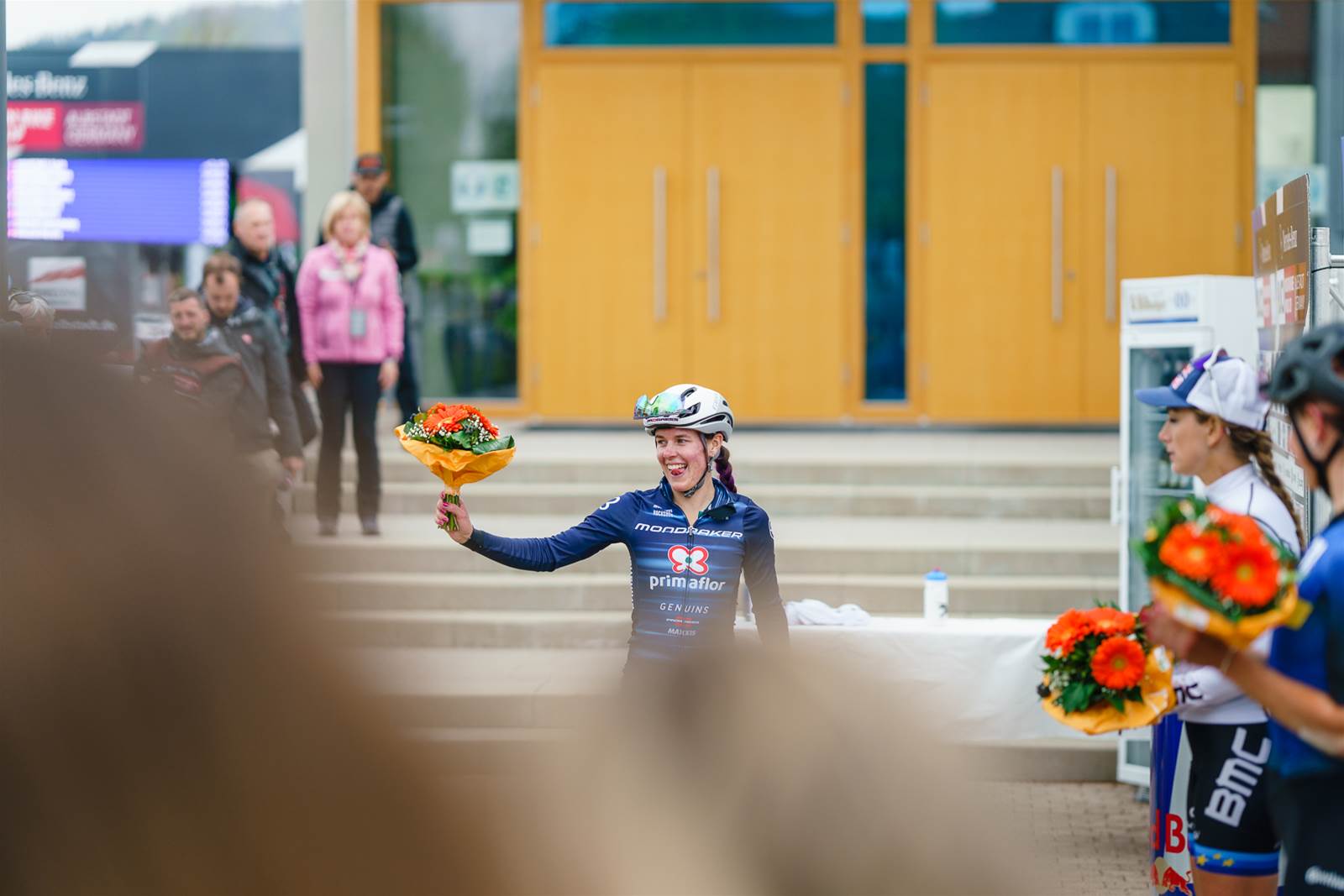 We haven't seen New Zealand's Sam Gaze for a while, after a pretty busy 2018 including some less memorable actions as he won the gold at the Commonwealth Games in Nerang.

You'd think there would be a fair bit going on with this race, but German rider Luca Schwarzbauer (Canyon) leading out the front of the race in what can only be called the worst team kit in the World Cup. It's purple, green, and a strange brown that looks like black that has been faded over 4 years in the sun. It's just an odd looking kit.

Whether the elite men wanted Schwarzbauer to have the limelight, or they were happy for him to keep a steady pace ahead of battle stations in the final laps, it's hard to say. They may also find the team kit hilarious and wanted the world to see it? 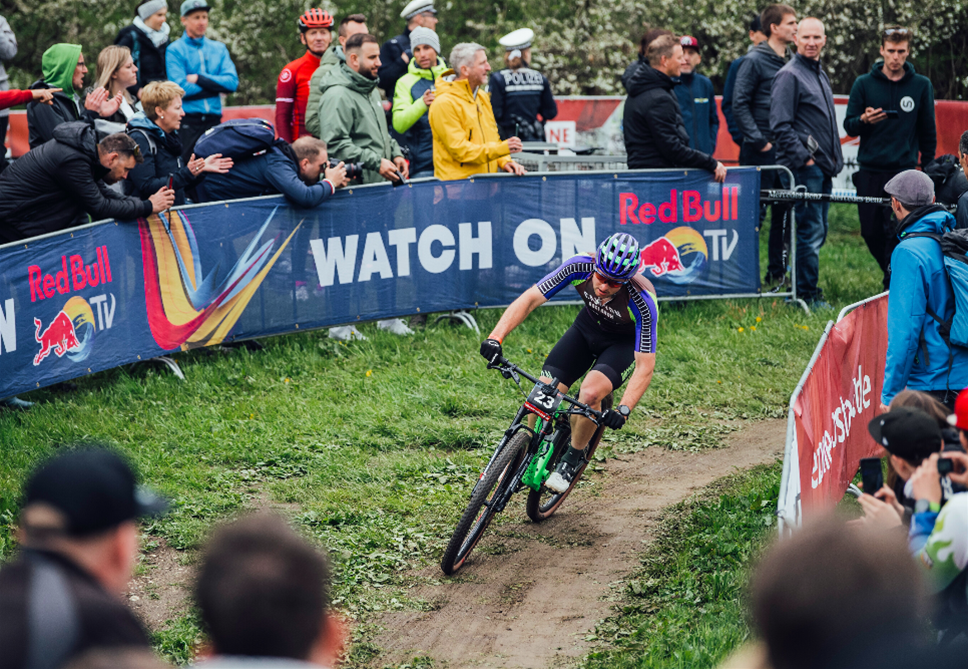 Photo: Bartek Wolinski
While the brave German lead the race, Gaze was moving up the field. Jordan Sarrou was there, Blevins (the World Champion) had dropped back, Schurter was there, Cooper was moving backwards, and Avancini was all power - even riding a highpost Cannondale Scalpel hardtail. And Avancini never rides a hardtail!
It was all go in the final lap, and while Schurter did get to Gaze's wheel with his sneaky side line through the whoops, it wasn't enough. GAze dropped the hammer into the final straight and showed the world he was back into winning form at the World Cup.
Sarrou ended up 2nd and Schurter 3rd.
The XCO race is on Sunday, and then the racing moves on to the Czech Republic next week. 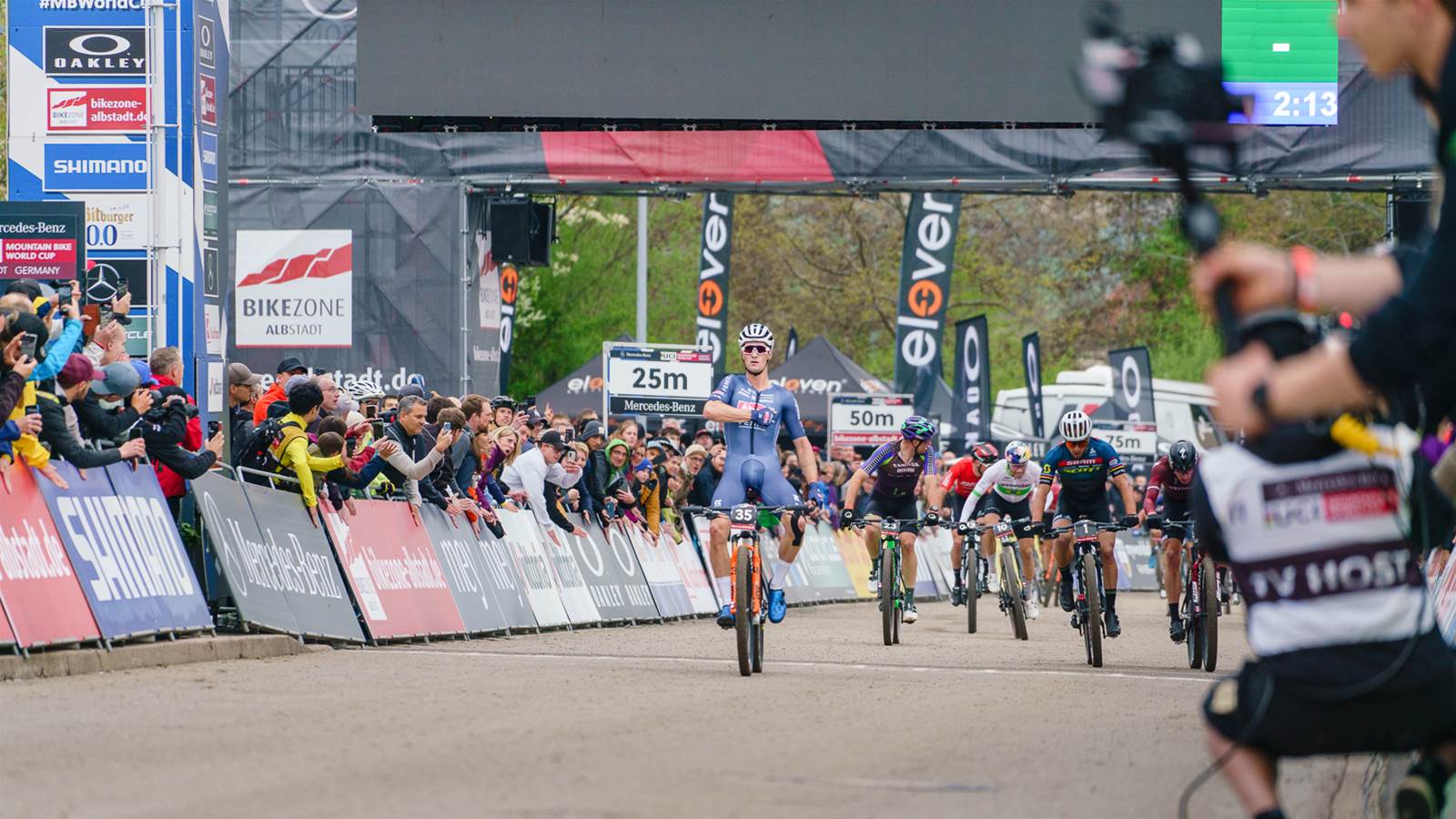