With stage one landing on Saturday, the EWS race in Derby kicked off with a bang down the Kumma Gutza trail.

With the EWS coming back to Derby this weekend, the town's population has swelled to beyond bursting point. Riders are on the trails, in the pub, filling the camp site and overcrowding the cafe. And it's all to watch or be part of the racing this weekend.

With the Fox on the Rocks Women's Funduro and the EWS 80 (racing 5 stages today) there really is plenty going on for the whole weekend. Then add in the first stage for the EWS 100 and the Pro riders this afternoon and it's a full day of bike racing madness. Anticipation was building all morning. Riders took part in the EWS 80 or finished their rides elsewhere on Derby and started the walk or ride up the hill, finding vantage points where they thought the best action would take place. The Vertigo Viewing Zone was pumping, with a DJ, beers being served out a rusted hulk, and a fast line through the melee of spectators. The first stage had a long ride to the start, with a climb up the shuttle road and then onto the singletrack climb called Snig track. Riders said it took about 50 minutes.

As the elite men started to head off, it started to rain. Not a whole lot, but the temperature was dropping and it was heav enough to get a little bit slippery. Chris Panozzo said even with just some rain it made a bit of an impact.

“The rocks are still good but everything else is pretty slick. So the times are a bit edgy, they might start to get a little bit slower. It was abouty a 6 and a half minute stage."

Crowds were in sections all the way down the course. If you were riding up the shuttle road you knew where to pull in and go watch - you could hear the roars.

"Australia is so cool for crowds," said Panozzo. "Even if there is one person it sounds huge. And there were about a thousand up there so it was super loud.” With stage one sitting apart from the next 5 stages on Sunday, Panozzo was happy to get down with no mishaps.

"I just wanted to get through today clean, then make sure everything is set to go and hang it all out tomorrow."

James Hall came through the heckle zone in a flash of blue DHaRCO clothing. And seeing him at the finish he admitted he was getting a bit loose. “It was a bit wild actually. I got a bit nervous when the rain came down, but I just tried to hold it as well as I could. I nearly lost it in one highspeed rooty section, but it was all pretty sick."

Like Panozzo, Hall thought the top of the stage was good on the rock, despite some rain.

“The rock at the top was still pretty good, but I think I might have got lucky as my run was at the start of the rain. Then halfway down it was saturated. There were sections that were just wet, with mud forming.”

And like Panozzo, Hall said the crowd really added to the stage. “The crowd was unreal, just so good. But I think the crowd anywhere is good. You get the reactions off them instantaneously. You hear them go silent when you're about to stuff up, or they're cheering you on and it lifts you.”

Josh Carlson came down in 45th position, and agreed that the slightly damp conditions made things tricky - as you just didn't know what to expect.

“Right now that was pretty hectic, a bit spicier than I anticipated. It was good but some of the bits in the middle you were just on the edge, and I was hoping that it worked out. That was really hard to gauge. I certainly lost a bit of time in the middle being a little bit cautious. You just have no way to gauge it." "You want to believe it'll stick but you come in at an angle, no brakes, coming downhill turning. It's a big stage and it's a big weekend. It's the queen stage but you don't want to throw it all away right now. But one down, five to go tomorrow.”

Connor Fearon was leading until the final riders came down. But none could beat his time - not just because he is damn quick, but also because he came down in the dry. Martin Maes was the last rider to drop into the stage and then went and put about 6 seconds into Fearon's time. Yeah maybe it had got a little bit more tacky, but it is yet another example of what a good bike rider he is.

Rowena Fry had the lead for the majority of the race for the women, as coming in the first bunch of women she had a dry track and little traffic... and of course she's a talented athlete.

Her time had her at the top until the very last riders, when Isabeau Courdurier laid down the winning time, and Morgane Charre was second fastest.

Racing kicks off again tomorrow morning, here are the results from Stage One. 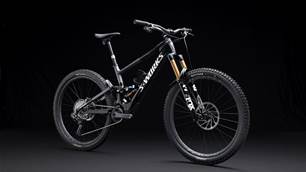