The World Cup, and rain, hit Les Gets over the weekend for a dual round with Downhill and Cross-country.

The Mountain Bike World Cup moved on to the next stop last week, with Les Gets hosting the second round of the Downhill World Cup and the fourth round of Cross-Country. With the Tour de France nearby, and the double header for the EWS coming just around the corner, it's a great time to be in the French Alps!

After glorious sunshine on Friday, the clouds rolled in on Saturday morning as riders faced a brand new track with multiple lines. Littered with roots, peppered with jumps and physically demanding, there was plenty of action as fans returned to a World Cup event for the first time since 2019.

In the elite women’s race, Mille Johnset lay down an early marker on a greasy track. Her time was quickly overhauled when Seagrave, who was carrying a neck injury and had struggled in qualifying, put together an exceptionally smooth run.

Reigning world champion Camille Balanche was the first to challenge Seagrave but a big mistake at the top of her run and a superhuman save halfway down meant she failed to threaten the leader. Valentina Höll looked uncharacteristically uncomfortable as she crashed at the final corner, while French rider Myriam Nicole produced an impressive recovery to give herself a chance of victory. However, she finished 0.252 seconds shy of her first World Cup win on home soil. 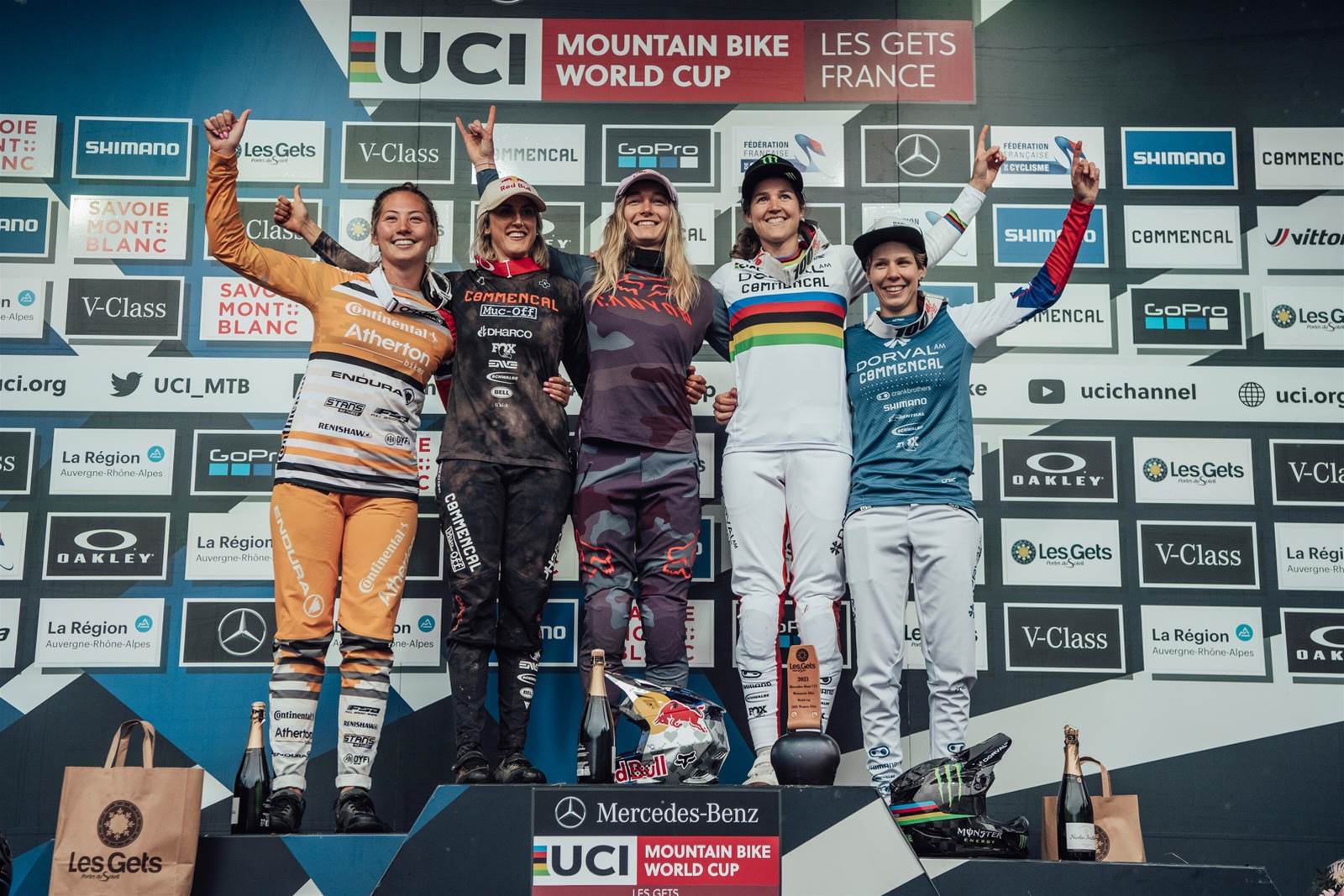 Following the race, a tearful Seagrave said: “It was a clean run, but I don’t feel like I have the fitness at the moment so I was so, so surprised. But I guess on a track like this, in conditions like that, it paid to be clean and smooth and safe.”

The rain kept coming and the elite men had to deal with a track that was unrelenting in its unpredictability.

Max Hartenstern took full advantage of the early favourable conditions, laying down a time that looked more and more impressive as the weather and track began to deteriorate.

Following a serious crash last week when he bit through most of his tongue, France’s Daprela had been on a liquid diet for much of the week and his participation in the race hung in the balance. However, showing plenty of grit, determination and no small amount of skill, the two-time Junior World Champion took the lead with a sensational run.

Even the clean run of Finn Iles, the experience of Greg Minaar, the superb straight lines of Brook MacDonald and the style of Benoît Coulanges couldn’t get close to Daprela’s time. Reigning World Champion Reece Wilson looked like he might tame the track with the wildest of runs before a huge crash sent him into the crowd and out of the running.

As the pre-race favourites struggled, it became clear that no-one would beat Daprela’s time. The Frenchman ultimately winning his first Elite race ahead of Hartenstern who hung on for second and became the first German man to make a DH World Cup podium since 1999. Daprela, 20, said: “It's amazing. Last week I crashed really hard and this week I win. Only yesterday I almost couldn't ride, but today I just sent it!”

With Connor Fearon in 4th, Australian Dean Lucas was also on form with a 6th. In Junior men, Ollie Davis scored a 4th - a huge result for the young rider.

France’s Loana Lecomte maintained her perfect start to the 2021 UCI Mountain Bike World Cup XCO season with a dominant win in the Elite Women’s race in Les Gets on Sunday, while the Elite Men’s race was won in equally commanding fashion by Swiss rider Mathias Flückiger. Here is all you need to know:

With new features adding an extra dimension to the Les Gets track and the rain falling heavily, the riders faced a tough challenge to tame the demanding course. In 2019 the course rode like a big BMX track, but the Les Gets event team loaded a bunch of rocks in there and added some forest sections. On screen, it doesn't look like a great course, but the improvements are positive, and the rider feedback appears to be good. But like most Euro race locations, when it's wet - it's really wet.

In the women's race, Rocio Del Alba Garcia Martinez set the pace up the starting climb, quickly establishing a gap on the opening lap. Jenny Rissveds was leading the chase and soon overtook the Spanish rider, only to see Lecomte storm in front, just as she did in Albstadt, Nové Město and Leogang. 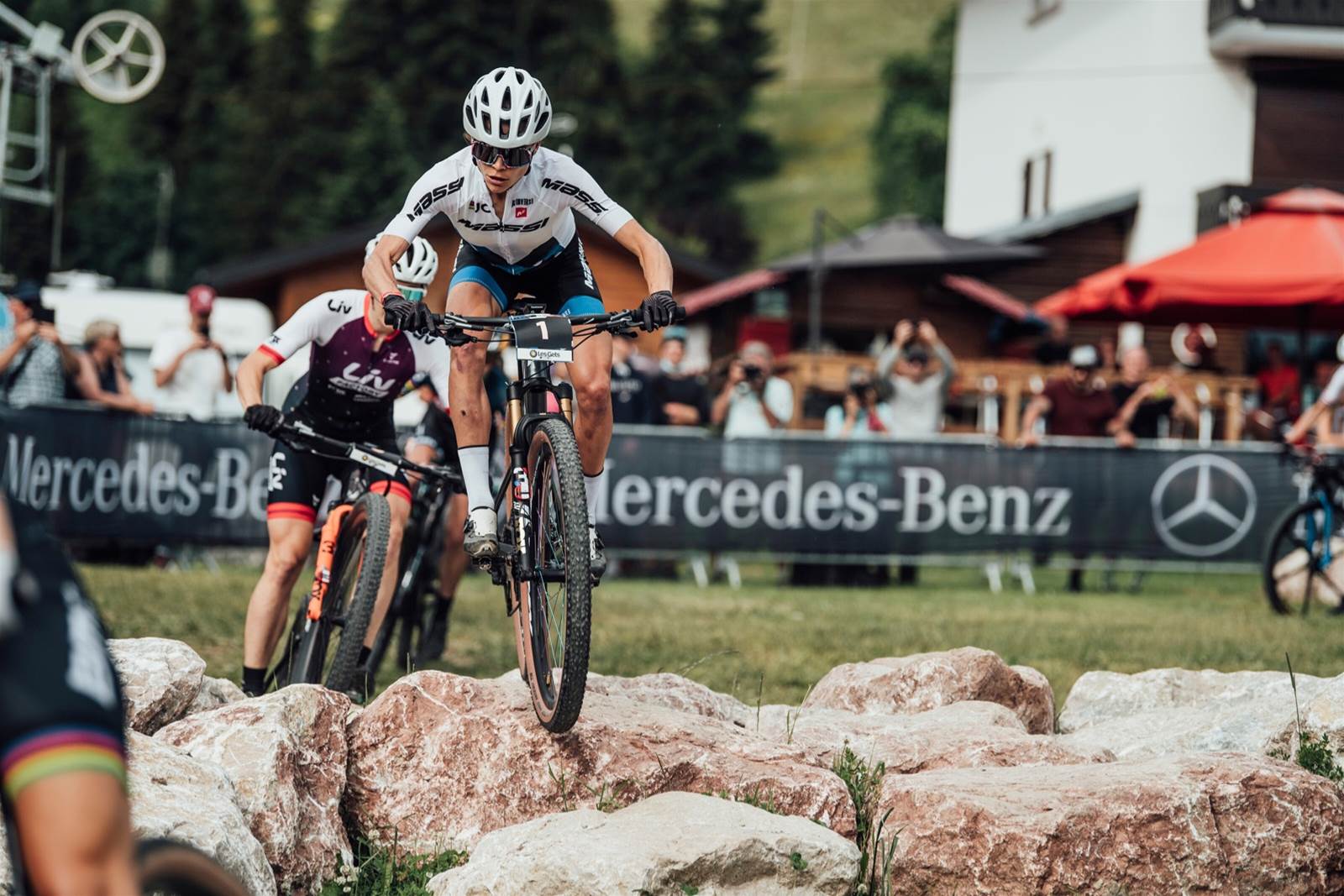 This shot is from short track on Friday, where PFP won.

The young French rider went on to dominate the race, securing a 21-second lead over the chasing duo of Pauline Ferrand-Prevot and Bec McConnell by the end of lap three.

Ferrand-Prevot had shown brilliant power to win the Short Track on Friday but was struggling a little in the conditions and began to slip back down the field, with Rissveds climbing into second and Evie Richards moving into third. All of the leading riders had crashes - excepy Lecomte.

Lecomte was managing the pressure and the conditions with confidence and maturity, posting the fastest time every lap. However, further back there was some late drama when Ferrand-Prevot and McConnell came together near the finish.

Ferrand-Prevot managed to get out of the tangle ahead to take fourth place and McConnell took fifth. For Lecomte, it was four wins from four races this season, while Rissveds high-fived the crowd as she came in second and Richards recorded her best ever XCO result with third.

Lecomte, 21, said: “It’s very special to race a World Cup in France and I’m very, very happy to win in front of my family and friends. Because of Friday’s race, I was a little anxious and stressed but we found the solution.”

In the Men’s Elite, Flückiger came into the race full of confidence having excelled in Leogang and claimed victory in the Short Track on Friday. The Swiss rider didn’t get off to the best start as Ondrej Cink, Luca Braidot, Alan Hatherly, Vlad Descalu and Nino Schurter all looked to make their move on the opening lap. 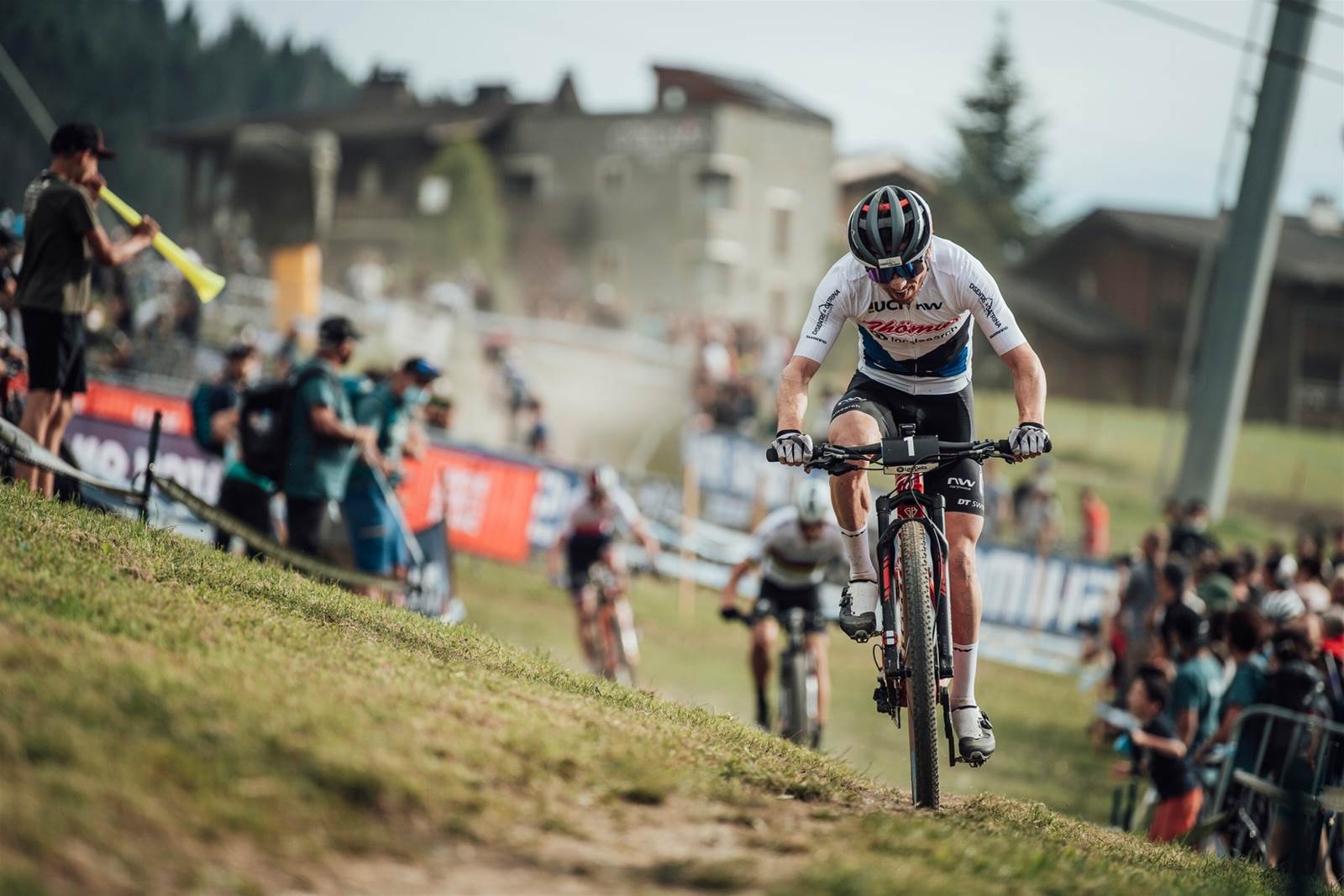 But when Flückiger attacked on the treacherous off-camber grass towards the end of the lap it was like he had found an extra gear and extra grip that no other rider had.

World Champion Jordan Sarrou was riding on home soil and, buoyed by the French crowds, rode up into a podium position on lap two. Sarrou and Hatherly were separated by just a few seconds for most of the race, while Cink crept clear ahead and Schurter slipped a little way back, battling with Daniele Braidot for fifth.

As the riders battled to stay upright and the conditions worsened, Flückiger secured his second consecutive perfect weekend of World Cup racing with a mix of fun whips and safe dismounts on the final lap. Cink was once again second, crossing the line 25-seconds back with the smile and clenched fist of a job well done, while a final lap attack from Sarrou secured third place and a huge cheer from the French supporters.

Flückiger said: “I took a lot of confidence from the last World Cup and from this season. Today was special with the changed conditions. I’m really happy with my performance, everything came together again today.” 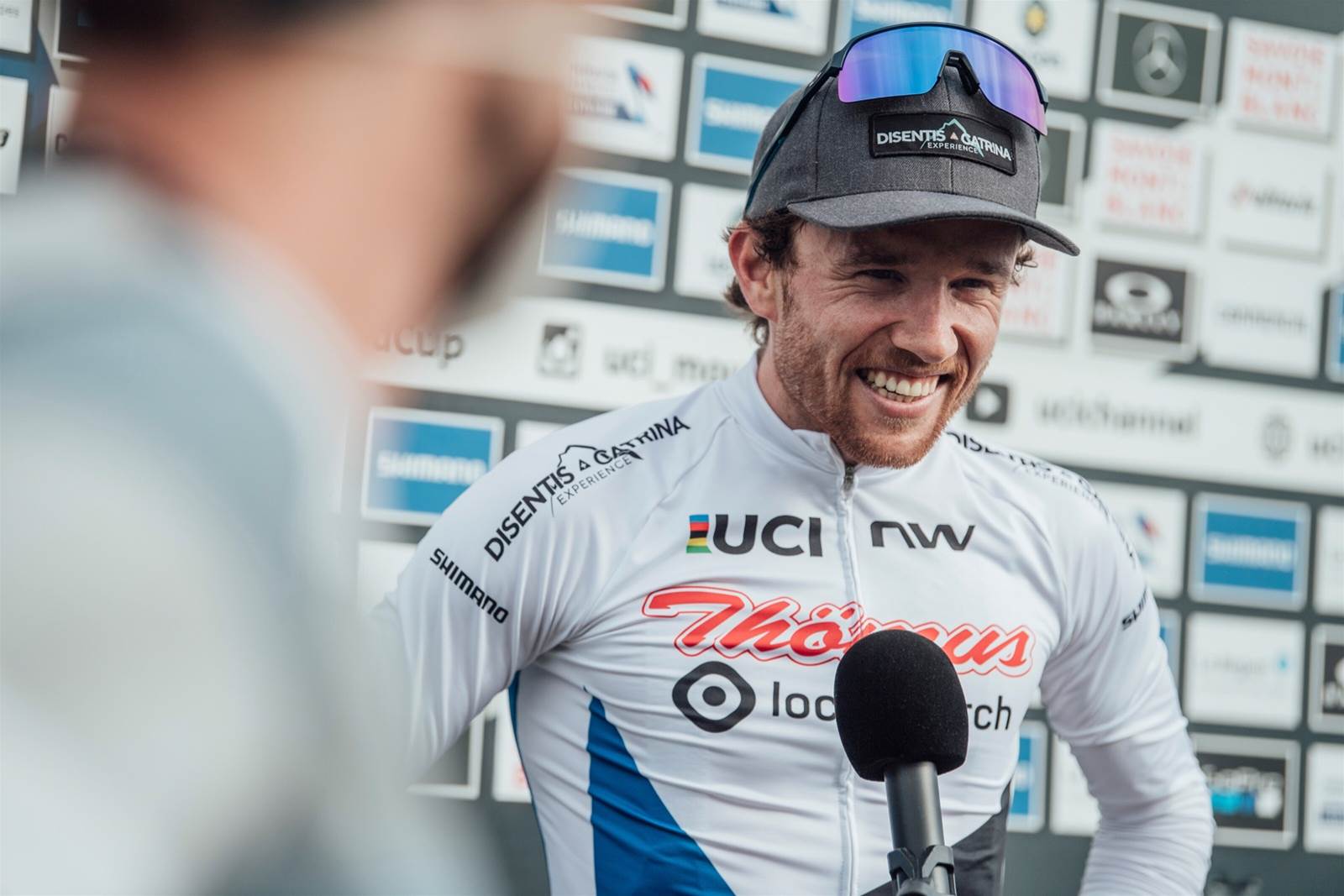 Dan McConnell finished 67th, and in the U23 men's race the trio of Australians were at it again. Cam Wright finished 29th, and Sam Fox slipped back to 36th after a crash in a closing lap. Piper Albrecht came in 66th. The riders return to action in XCC and XCO at Lenzerheide from September 3-5. For the big wigs, eyes now fall on Tokyo.