The first ever eMTB World Championships had everyone wondering - how exactly would it play out?

Images and insights by Matt Rousu

Despite some people thinking the notion was ridiculous, it was really well received and well run. The men's event had current and past World and national champions from all sorts of disciplines. The likes of Christoph Sauser was lining up against Jaroslav Kulhavy and Wyn Masters.  Alan Hatherly lead from start to finish. 33x World Cup winner Julien Absalon clawed his way though the field from quite far back to get the bronze.

Hatherlay won the 2018 UCI U23 XCO World Championships, and Matt Rousu quizzed him - which was harder?

"They were both the same. One hour is so tough. In a normal cross-country you have 1 hour 15, or one hour and thirty minutes. So you have to pace yourself a bit. But one hour full gas with a bike that is around 20kg, is very differnt. Physically it's so tough, I think my arms are just as tired as my legs." "I have a power meter on the bike and on the climbs I was looking at the same power that I do in cross-country, it's insane. The aim was to keep it real smooth and nail all your lines. One mistake would lose you 2 seconds and to get a gap on the e-bike is so hard with a limiter on the bike at 25km/h." "We would climb just under that, as the power cuts out. But to keep it close to that limiter was just so crazy hard," added Hatherly.

"For the first ever eMTB World Champs I think they nailed it with the course. It was so technical and there were actually so many spectators out there it just made it such an awesome vibe." While Machalie Rochette (Canada) lead the race, she lost the lead on the last lap and Swiss Nathalie Schneitter won the women's race. Anneke Beerten was 3rd. The event was 4 laps of 5.6km and the course was super tech climbs and fast descents, and by all accounts really stood on its own quite well. 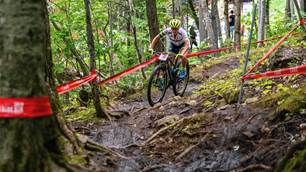