The 2022 Norco Range is bigger than ever - and it's set to open up new lines on big mountains.

The new Norco Range made a thump when it was released in June 2021. The Range has been eponymous with Norco, and with the Sight having a real jump up in capability, many wondered if perhaps the Range was no longer in the line up?

No, it was just being turned into a high-pivot all-mountain and enduro super bike.

The new Norco Range is a 29" wheeled 170mm carbon bike, aimed at dominance on demanding enduro events, and tackling wild lines in big mountains. The Norco Range C2 we have on test sells for $8599.

First things first, its another high pivot with an idler but unlike some, the Norco has a Virtual linkage driving the rear coil shock. The quality of the idler and its guide are good, working quietly in the stand and on the trail under high loads and soggy conditions. The Range climbs very efficiently for a 170mm front and rear rig which weighs more than it feels like on the trail. The linkage itself is beautifully machined and something you would expect to see on a bespoke offering, almost a shame it's down and nearly out of sight covered with high impact plastic strike plates and dirt. This is a virtual high pivot, and yes it does look very similar to the Norco Aurum HSP (High Single Pivot). The pivot point is not fixed which means Norco can have a rearward axle path without the chain tugging on your pedals - or pedal kickback - and still have low levels of anti-rise, which is how the braking impacts the suspension.

The result is exatly what you want, active suspension on rough terrain, that isn't influenced by braking, and doesn't get hooked up on square edge hits or give lots of pedal kickback. How active the suspension is under braking is what puts the High Virtual Pivot ahead of the HSP design of the Aurum. The idler is still required to accommodate the chain growth as the rear wheel follows it's rearward axle path, without rotating the cranks backwards (which is the pedal kickback you might feel on other bikes).

Each frame size has had its pivot locations specifically designed to match the overall design kinematics, which is no small feat when the rear ends are different on each bike.

Ride Aligned and the Norco Range

The Ride Aligned concept has been the main driver for Norco for a few years. Norco were using Gravity Tune to compensate for rider size differences for a while. This meant bigger bikes had longer chainstays, and the reach grew proportionally as well. Or, these numbers shrunk. But the aim was to have the bike ride how the designers wanted, without it being optimised just for a medium or large. Ride Aligned took that and put a lot more specific data in about people's position on the bikes, as opposed to just the data from the bike itself. That means a rider's position is used for determining how the bike will ride loaded, where the centre of gravity is, how the reach will feel, how the back end will feel, how the suspension works and yes, many other components as well. It's a very holistic concept, but one that has taken years of data acquistion and untold hours of testing with riders. Norco have said that the new Range was their most extensive testing yet.

Norco took Ride Aligned a little further with the frame designs for the Range, as not only do the rear centre lengths and seat tube angles change across all four sizes, but the head angle as well. The smaller frames have slightly steeper seat angles to help smaller riders keep the front wheel loaded and hooking in. My first ride consisted of both natural rocky trails and park style jump lines, both of which didn’t come close to unsettling the Range, larger and steep trails are on the cards for this bike, we aren’t even close to its limits as it flattened the majority of our local trails with a snigger. I knew the Range was going to be pretty special pointed down a hill, so the biggest surprise was how well the Range climbs and how easy it is to manoeuvre for a big rig. I have some fine tuning to do and bigger hills to session, more to come. The full review will be in Issue #194 at the end of January. 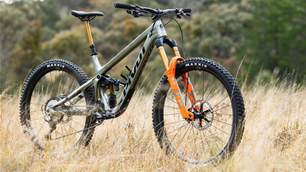 All about the 2022 Canyon Torque