Kookaburras laughed with glee, presumably as they saw us - two city-slicker dirt bikers and one bearded photographer guy - loaded into the fourby and rumbling through the Spicers Hidden Vale property in search of adventure. Moments later, a mob of kangaroos, reticent in their willingness to move for the motorised beast, were shooed away as we headed towards the place we were all so excited about - the hills… and inevitable descents.

The four-wheeled Polaris rescue vehicle-come-shuttle grumbled but never faltered as we traversed up the ridgeline of Hidden Vale Adventure Park; the hill so steep we were unanimously relieved to be shuttled to the peak trails. Grasshoppers and butterflies flew by - and sometimes on - us as we soaked in the sun and surrounds of lush green grass, tall gums, red dirt and what seemed like endless sky reaching out in front of us. We hadn’t even hit the trails and Hidden Vale had already delivered. The rise of Hidden Vale Adventure Park
Hidden Vale’s terrain has long been analogous with the harshness of Australia: just as our fauna is as tough as nails (think sharks, bluebottles and brown snakes), the landscape of Australia is similarly dangerous with its heat and desolation. Nothing says ‘this is Australia, we are all mad to do this’ like racing bikes in 35 degree heat through the dry, harsh and rock-riddled Hidden Vale Adventure Park. That was my introduction to the Queensland venue a good six or seven years ago, and by God was it a tough one.

Hidden Vale has evolved significantly through the years, from that first experience of riding perilously parched through the original rutted, rocky and harsh trails, to what it is now; a fully formed adventure park that retains the crunchy-granola trails of yesteryear, in addition to newer flow trails, beginner-friendly options and even dedicated gravity runs. The original trails - crowd favourites such as 007 and The Epic Trail - are harsh on the body and the mind as much as they are exhilarating in their narrow rockiness, but the newer trails mean that riding HVAP is no longer a bone-rattling day out. The park now caters for your family, your non-riding partner, the cross-country and marathon crew, as well as the enduro crowd and full-face set.

For this development we have the vision of Graham ‘Skroo’ Turner to thank, with the blood, sweat and tears from park manager Hayden Brooks - who is also our tour guide and pilot of the Polaris, and is at the coalface delivering Turner’s ideas. “He was emailing me from a recent holiday at Whistler,” Brooks says. “He was so excited, he’s all about making Hidden Vale Australia’s equivalent of that. We are in the process of nailing down the new campsite area and development will start probably early 2018.” No doubt ski jackets will be lacking and, instead of black hero dirt and pine forest, ‘Australia’s Whistler’ will feature ghost-gums and red soil.

Being based within the grounds of the premium Spicers Hidden Vale resort, one of Turner’s travel ventures, the Hidden Vale Adventure Park has never lacked accommodation. The development of a new campground (with plans for restaurants, campsites and a brand new dam) will enable more people - especially families - to access the park for holidays. In addition to this, the new cabins, which are located in the midst of the trails, sleep up to 16 people and are available for group bookings, filling the gap between camping and five-star pampering.

Brooks points out a wildlife breeding centre as we are leaving the Spicers accommodation to head on our adventure. The aim of the centre is to  produce koalas, spotted quolls and black cockatoos - among other animals - and release them onto the property, which could mean more up-close nature experiences when out for a pedal in the near future. But first… Trails
While learning about what the future holds for the park is certainly interesting, we are first and foremost mountain bikers, raring to get out and ride. Once we had made it up the perilously steep climb, we hopped out and extracted our bikes from the vehicle, heading out for our first trail, Scree. Launching over the bridge into the trail we were greeted with whoops and chutes, perfect black mountain-dirt, and no lack of rocks to keep things interesting.

While we stopped for the obligatory photo opportunities, we couldn’t help but stare out into the valley; these trails (comprising part of ‘stage two’ of a three-stage trail network plan) snake around the hillside making for dramatic panoramic shots. A few more snaps and we head to Gorgeous. This trail lived up to its name, with even more expansive views, and we didn’t even care that it was a mainly wide trail with just a few berms and barely any other features; it was a trail you just had to ride to experience. We hear a whirr in the valley below; the World Trail guys are busy at work building more shralp that constitutes the remainder of the second stage of development.

Next up was Skyfall; the most sought after trail on the property…for now. The 2km trail takes the fastest guys about 3min 20secs to get down, but we take our time checking out the lines. Endless small gaps, bigger gaps, rock drops and a whole lot of speed greets us. While it’s a trail that could be ridden by anyone on a hardtail, having 140mm travel to throw around made Skyfall a lot more fun to shred.

“Do you reckon I can make that?” says Ben, our other city-slicker on the ride and accomplished gravity shredder, pointing to a rock between an A-line and a B-line that boosts to nowhere. Tim, our photographer, and I look at each other with that awkward half-grimace you make when someone is saying something that’s a really bad idea. Ben wanted to boost off a rock on one side of a tree, jump over a patch of wild shrub, and transition to land on the other side of the feature, about eight metres later. We hold our breath as he has a run up… and he makes it. It wasn’t pretty, but it was the moment of the day as I hear Tim and I exhale at the same time as he manages to just hold it up on the landing. Ben proves there are endless possibilities for line choices at Hidden Vale - if you have the skill and confidence to commit.

We then head to Trailer Thrash, Yowie, a new unopened trail Treedom and then to Dandy’s. By this stage we’re exhausted. The rocks and the red dirt of the lower trails almost had us beat; it’s the hottest part of the day and our stomachs are protesting. We have ridden some of the best trails at Hidden Vale but still we haven’t gotten anywhere near doing them all. We missed the speed of Plane Sailing, the old-school feels of The Epic Trail and Rock Bottom, the rocky Remnant, the flowing Ripple Effect, and so many others. We throw the bikes on the Polaris and get ferried back to Spicers to get some tucker into us, vowing to return to shred the rest later. Pork burgers and jalapeño and parmesan fries went down quickly. Chased by some ales, with views of the valley, it would be hard to find a better spot for some post-ride grub. Now and into the future
Part of the development of Hidden Vale Adventure Park has included more integration between the Spicers Resort and the trails themselves. Being just over an hour from Brisbane CBD, Hidden Vale has become a trail riding destination rather than just another trail network; a mountain biker’s barn serves delicious post-ride food and beers or for something a bit fancier the Homage restaurant features a five-star gourmet dining experience. The resort features two pools with views spanning the valley, a great place to relax after a hard day’s riding.

The Park hosts numerous events aimed at everyone from the newer rider to the elite athlete; with The Flight Centre Active Travel Cycle Epic remaining one of the premier mountain bike events in Australia. Other events - including a 24hr race (incorporating a 4hr event), a ‘Dingo Duo’ biathlon , a ‘Dingo Enduro’ gravity race and the 3plus3 two-day multi-lap endurance - mean that every type and level of mountain biker can come and experience Hidden Vale, whether it be to race at the pointy end or just take part and then get stuck into some burgers and beers. With categories for kids from balance bikers to teenage tiprats, Hidden Vale is a park that caters for every rider, regardless of age or experience.

If you’re in a relationship with another mountain biker, you would be hard pressed to find a better place that ticks all the boxes for a romantic getaway than Spicers Hidden Vale and the Hidden Vale Adventure Park. Likewise, for a family trip to the country it’s an option that caters for kids and parents alike. To be fair, even if you’re a solo mountain biker or have a group of mates, Hidden Vale is a good option. With so much on offer, what are you waiting for? 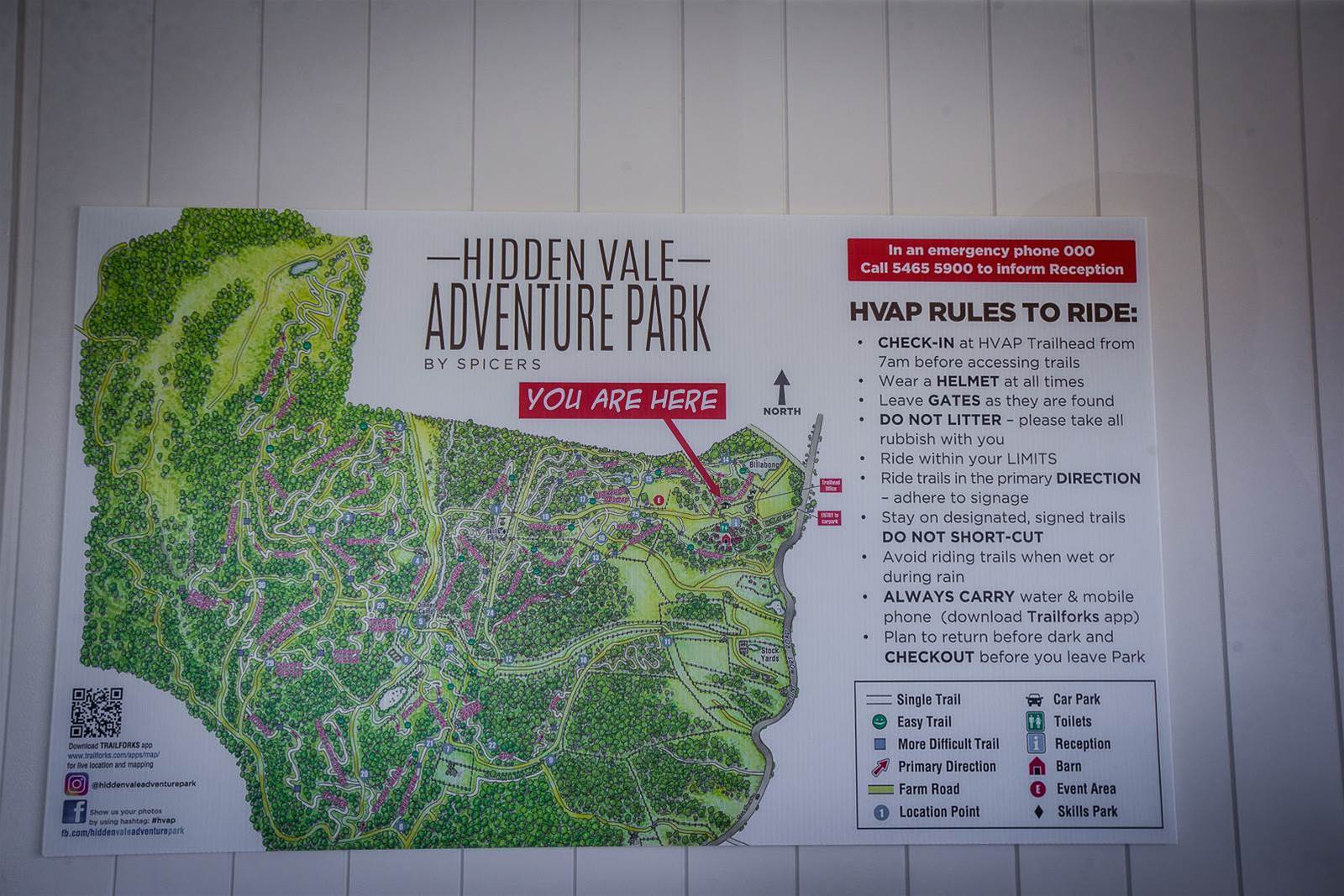 Need to know and (other) things to do at HVAP:

Spicers Hidden Vale is located on Grandchester Mount Mort Rd, just over an hour from Brisbane CBD and about the same travel time from Toowoomba.

Climbing not your forte? There is a 3hr shuttle option with the mighty Polaris, which will set you back $349 and can haul four people and bikes wherever you want to go on the property.

If you’re packing light, or heading to Spicers without a bike, bike hire is available from $55 for a half-day.

After your ride, enjoy a light meal and perhaps sink some eight-balls in the Barn or spy some views of the valley with a few beverages al fresco.

Check out a five-star dining experience at Homage Restaurant, using ingredients sourced locally and from within the property itself.

Speaking of local ingredients, there is an animal barn sure to entertain the little ones while you’re riding (along with a supervising adult, of course!).

Sore? Tired? Spa Anise can sort you out with a range of massage and spa treatments.

Hidden Vale Trail maps are available from the sign-in shelter - where you must sign in and out of the park so they can send out a search party if you don’t come back. Maps can also be downloaded from the TrailForkx app.

For trail updates head to the HVAP Facebook page: facebook.com/hiddenvaleadventurepark
For enquiries about the Spicers Retreat log on to: spicersretreats.com/spicers-hidden-vale 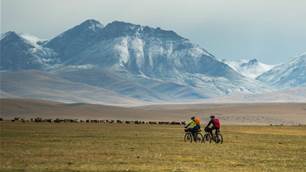