Dry, dusty, drifty, loose - call it what you will. The DH track in Andorra did the job of showing who was fastest.

Riders toed a fine line on the boundary of grip in finals at the Vallnord Mercedes-Benz UCI Downhill World Cup, but winners Rachel Atherton and Loïc Bruni found perfect balance in front of a roaring Andorran crowd.

The course, being raced for the sixth time at World Cup and World Champs level, had deteriorated throughout practice and qualifying and was left full of holes and loose dirt. The crazy heat in Europe means it has also been really dry, creating dust that might rival Mystic Bike Park.

One man to succumb to the dangers was Aaron Gwin, who smashed into a tree with his shoulder late in Saturday’s practice session, leaving the American unable to make the start for finals. 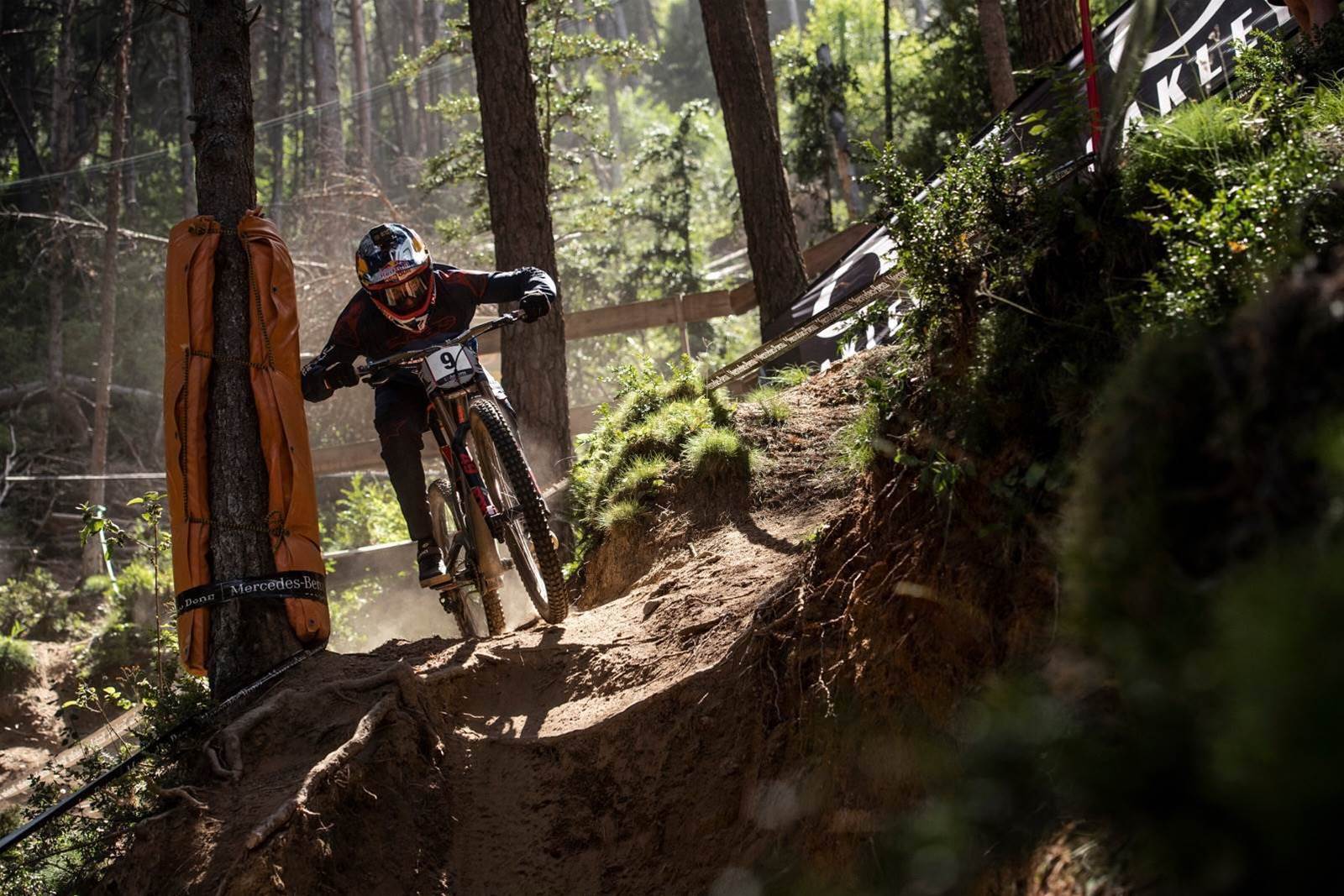 Due to her crash in qualifying, Tracey Hannah, series leader going into this race, was on course early in the women’s finals. She nailed the flatter upper sections of the track and kept her focus through the hardest, steepest mid-section. Unfortunately, a momentary lapse in concentration saw her crash out close to the finish line, but she still ended the day in third.

It took a while for anyone to come close to Hannah’s powerful run but once Rachel Atherton got on track it was clear that, bar a major mistake, she was set to take the lead. Atherton bettered Hannah’s upper section and stuck to her lines through the tricky steeps, eking the most out of the hill right up to the finish. Atherton took the hotseat and the day’s win. Atherton said: “It was a super-hard track. Everyone was struggling and everyone was going super-fast. I knew it was going to be on the limit and I was riding real on-the-edge at the bottom section. I can’t believe I stayed on!”

Marine Cabirou, who won the Junior World Champion title here in 2015, was clean and fast down the entire course, reclaiming time to Atherton in the middle sections of the track and finishing just 2.4s behind her at the finish. This impressive ride would earn Cabirou her career best Elite result, ending the day in second.

A wild ride from fastest qualifier Nina Hoffmann saw her crash out and lose a shoe midway through her run, but 2019’s up-and-coming star rider commendably battled on regardless, crossing the finish line to the applause of the day’s winners. Bruni is the king of the mountain

The French are unstoppable in men’s downhill this season, and it wasn’t going to end here. The bar was set high early on by 2013 Vallnord winner Remi Thirion, who took the hotseat.

It took most of the session for Thirion’s time to finally fall, with riders making small but costly mistakes in the unforgiving dust, some crashing out completely. Finally Brook Macdonald proved there was still more to come from the current fastest riders in the world, and from there on in the pace went through the roof.

2018’s winner Loris Vergier was absolutely electric, getting loose in the dust but remaining upright and precise, smashing the current leader’s time and looking absolutely unbeatable. Troy Brosnan had a good go and was up on Vergier’s time at the first split, but lost a little further down the hill. Nonetheless, Brosnan put in a clean and brilliant run, finishing just 1.2s slower than Vergier and once again stepping onto the podium in third; – he hasn’t been outside the top three all year.

The pressure was on Loïc Bruni as last man down the hill, but the top qualifier and winner of two World Cups already in 2019 matched Vergier’s speed and added even more finesse, slicing his way through the roughest sections of the track. Bruni perhaps took fewer risks in the steepest sections, but he'd made up time in the earlier parts of the run and crossed the finish line to make it the first male repeat winner on this track and his third win in 2019. Bruni said: “It was super-scary, honestly. I had a pretty good top [section] and I was talking to myself like ‘OK, it’s good,’ I felt faster than yesterday… I had so many close calls with trees, with braking points and I held on. It’s super-tight again, but I’m so happy. It was really good racing and I’m stoked.” In the Junior races, Vali Höll upped the ante from qualifying and stomped her fourth Junior Women’s win of 2019 with a time good enough for fourth in Elites. Meanwhile, Thibaut Daprela surrendered the Junior Men’s win for the first time this season to Mattéo Iniguez.