The Swiss might be famous for cuckoo clocks and making their trains run exactly to the second, but never forget what stunning riding the country has to offer in the majestic mountains.

We were just enjoying the amazing panoramic view of the mountains in the morning light as we immediately switch to full concentration, tunnel view. An old mountain biker’s saying comes to my mind: “You ride where you look”. No sooner had that thought passed and we were away, my focus moving to the narrow path ahead. The mountains vanish from our vantage point. Our hearts beat faster and concentration is at 100 per cent. Phew, all that early in the morning?! Not that the trail is technically demanding but the exposure of some parts demand steady manoeuvres and leave no room for error. As our bodies warm up, our movements become smooth and the joy of riding grows. All hesitation leaves us and makes room for speed. Now we enjoy it, and start to feel the flow. This is what mountain biking should feel like. That morning we took the gondola to the Jakobshorn. It catapulted us up 1,000 metres into alpine regions in two stages starting in Davos. The peak lies at 2,589m and offers a breathtaking panoramic view of this stunning region of Switzerland. The first section over to Brämabüel is a dream come true for mountain bikers that have a head for heights. Even if it takes a while for the body to reach operating temperature, and for the path to the ridge to become enjoyable.

We take a first break above the Brämabüelstation and take our eyes off the trail to soak in the view. The Strelapass lies opposite from us, between Strela and Schiahorn. It’s on our list for the next day. A frequently taken trail to Arosa lies over there. It’s just one of the numerous passages the region has to offer. Trail building has a tradition here. This doesn’t just pertain to the trail crew, which has been keeping the trails in shape for a couple of years now. It also entails the first settlers. Davos was settled in the second half of the 13th Century by families from the Valais region. They settled in the higher regions and lived in dispersed settlements and hamlets which were connected by trails. We use many of these age-old paths with our bikes today.

The reservoir below us is more a sign of modern times and is our next aim. The terrain becomes steeper but the trail snakes its way down smoothly, interrupted by a few switchbacks. The barren landscape changes as we dive into a sea of dwarf alpenroses until we reach the Ischalp. What follows is proof of the tireless efforts of the trail crew. A well-kept trail with lots of banked curves and flowing passages allows us to stay off the brakes for a long time. Sometimes a little too long to be honest. We barely avoid taking off into the woods a few times. We reach the centre of Davos totally psyched and know instantly what we have to do next: get back up to Jakobshorn. The highest alpine rides won’t be accessible until at least late June, so plan your visit accordingly. Locals will usually suggest visiting in September, or even October, to benefit from smaller crowds and clear weather.

Davos sits within the Graubuenden canton of Switzerland, and is best accessed by rail from Zurich airport. For travel times and itineraries, check the Swiss Tourism website.

Davos is just a short train ride from other well-known mountain bike locations like Lenzerheide, Scuol, and even St Moritz.

We decide to take a different route this time. We want to ride down to the well-known Sertig Valley, a 10km long side valley of Davos. We pass some of the evidence of the huge winter sport options of the region. Skiing is part of the tradition here and the two are closely knit. For example, 1934 saw the opening of the world’s first T-bar lift here. It was 260 metres long and conquered an altitude difference of 60m and came after a scientific study of a Davos ski school in the 1920s showed that a student of the ski school actually skied a total of just six minutes during an entire hour. The rest was ascending to the start.

It’s a good thing that the lifts today are faster and that mountain bikers are allowed to use them. It makes it possible for us to get back to the valley of Sertig just in time for our hunger to kick in after another noteworthy downhill trail ride. The old block houses of the Walser settlement exude a homely feeling and have us looking for a place to grab a bite to eat. Since the village is tiny we don’t have to look around long. The sign above the door says “Gasthaus zum Bergführer“ (Tavern of the Mountain Guide) but we, despite being mountain bikers, are welcomed to the terrace with a hearty “Grüezi.” The ‘Sertiger Capuns’, a traditional dish, catches our attention. They are packets of spaetzle dough packed with herbs and meats rolled in chard and baked with mountain cheese. They prove to be a filling treat for our afternoon on the mountain.

We’re back on our bikes two espressos later. We want to ride up to the Rinerhorn. The host of the tavern told us that the trail is clear since it’s often used to ride down. And after climbing 600 metres, we could confirm it ourselves. Again, we’re impressed by the panoramic view from up here. A true labyrinth of singletrack makes its way down the official route to Monstein. The stretch is considered to be one of the most beautiful in Davos and is part of the Alps Epic Trail, which has been praised as one of the best and longest trails in the Alps by the International Mountain Bicycling Association (IMBA). In Monstein we agree. The trail has been one of the best that we’ve had under our tyres. Unfortunately we don’t have enough time to follow the trail along the Zügen Canyon to the Landwasser Overpass.

The Panorama Path Davos, which we follow the next day, is just as impressive as the singletrack of the first day. An early start with the rail up to the Weißfluhjoch takes us into the alpine mountains again. We take many breaks on our way along the Felsenweg to the Strelapass, which we had seen from the other side the day before, just to take in the beautiful vistas. In addition, we still feel yesterday’s rides in our legs and we don’t want to hurry anything. The slippery bedrock of the singletrack through Schiawang forces us to ride with care. On our right lies the direct path to the steep Schiatobel. We finally reach several avalanche obstructions and enjoy a grand view into the Landwasser Valley. The Alps Epic Trail leads there and we mentally add it to our to-do list. After a short and beautiful break, the singletrack winds higher and passes the Parsenn Cabin.

Piercing, loud whistles make us stop right after passing the cabin. We look around and see nothing. Then we hear them again. It takes a while until we discover the cause. Marmots, called Munggen in the local language, warn of danger with their sharp whistles. The rodents can be seen up here from April until October when they gain their fat pads for hibernation. Aside from the marmots you can also find goats around the Weißfluhjoch. Another ‘species’ can be found up here: hikers. Most paths are used by hikers and mountain bikers alike. It works astoundingly well. You can find an extra sign at every guidepost saying “Trail Tolerance: This trail is used by bikers and hikers.” Rules of conduct are posted at the exits of the lifts for the users of the paths and it really works. We only had friendly encounters during our visit in Davos. The great part is that every path is also a bike trail. So you’re basically allowed everywhere with your tyres. We’ve seen different in other regions of the Alps.

The path has another tough section to offer along the Gotschnagrat to the Schwarzseealp. We circle our way down, highly concentrated along the technical trail. It is so tight and then exposed in places, it feels like we barely made it without flying off. As a reward we find a flowy world class trail to the Gotschnaboden waiting for us, depleting our endorphins.

As we arrive back in Davos in the late afternoon, still giddy but admittedly tired from today’s round, we realise there are so many possibilities and trails that we have to come back here again. Zügen Canyon, Landwasser Overpass, Pischa, Welschtobel…  Our wish list of the region is longer after our visit than it was before we came here!

The alpine character of the paths at high altitude, slippery sections through dwarf alprose carpets, flowy trails in the woods, stone filled passages, banked curves and jumps. There’s really something for everyone here. We’re definitely going to get used to the trails next time before we begin our day mountain biking on exposed paths in dizzying heights in this multifaceted region. 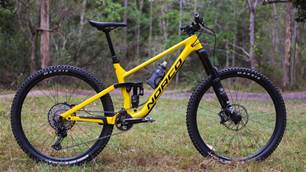