Bicycles Online have their 2020 Polygon Siskiu D7 in stock - and it's a high value ripper.

Polygon's bikes have continued to be refined, and the Siskiu models are said to be one of the most popular full-suspension mountain bike designs in Australia. And given the bang for your buck on offer from Polygon, who are sold via Bicycles Online, it's no surprise they are so popular. The 2020 Polygon Siskiu D7 sells for $1999 (currently listed at $1899) and is the 4th generation of the model - and sees improvements in geometry and suspension, along with a few other key updates.

The Siskiu D7 uses size specific wheel sizes. So small and medium bikes come with 27.5" wheels, while large and extra large roll on 29" hoops. The frame has Boost spacing out the back for some future proofing, and the updated geometry means the back end is a direct result from the wider hub spacing.

Polygon have also increased the reach and slackened the head angle. This large test bike has a reach of 465mm and a head angle of 67.5 degrees, matched with 120mm travel at each end. The Polygon Siskiu D7 is sold via Bicycles Online, which brings all the perks and of course the limitations of buying a bike online. We've gone over those here, but in general buying a bike online is a process that gets you a lot of bike for your money. Sure you might not had a showroom to touch and feel the bikes, but you can look at them all online 24/7. There's even a 14-day free test period. Sure, there are specifics for that, but the support from Bicycles Online is extensive. They just want you to be on the right bike and having fun.

After confirming the bike, it arrived two business days later in Queensland, having come up from Sydney. There's not much to do when building a bike from Bicycles Online. In thise case I knew I would be fitting handlebars, a dropper post, a front wheel and pedals. If you're not comfortable with that, call your local bike shop to book it in. It should be about 15-20 minutes of work, depending on the proficiency of the mechanic. For reference I had the bike ready to ride in 14 minutes, including taking some quick photos. It really is pretty quick. I didn't fit the bell or reflectors though... Bicycles Online do include the tools you need, including a basic torque wrench from Entity. Inside the box, just like any other delivery of a bike from Bicycles Online, you'll find the bike is packed well and supported inside the box. With the bike out, just about all the packaging holding it together is reuseable. If, by chance, you do return the bike make sure you keep all of it. Otherwise the velcro straps are super handy! By far the hardest part of building the bike is attaching the cable for the dropper post to the base. And it's actually pretty easy anyway. Although interestingly, the Siskiu has two dropper posts. One remote actuated and on which is OG spec. With the bike built up, and without the flat pedals fitted or a tubeless conversion done, it was time to chuck in on the scales. 14.95kg isn't light, but the Siskiu D7 is about delivering specs, geo and ride quality at a good-value price. And considering this is a 120mm travel trail bike with a dropper, 1x11 group set and through-axles - it is about what I would expect. A closer look at the Polygon Siskiu D7

With the bike built up, it was easier to look over it. Polygon have specced a Shimano 11-speed drivetrain... mostly. There is a bar clamp SLX shifter and a clutched XT rear mech, running a Sunrace 11-46 cassette and an alloy 2-piece crank set with a 32t narrow-wide ring. Interestingly, the Siskiu uses a Shimano direct mount derailleur. These never truly took off, but they tend to make rear wheel removal faster, and crate a stiffer base for shifting. Those are both very good things.
Braking is handled by Shimano as well, with 2-pot M201 brakes. These are an entry level unit, using resin pads and basic rotors. This is most noticeable on the bars, as the levers are really long - akin to the length of older levers. That's fine, you can run them further inboard. But it's also a good suggestion that the bike isn't designed for being sent down the fall line of your local alpine mountain side. Suspension is taken care of by RockShox up front with a Recon, and X-Fusion out the back. Both forks have adjustable rebound and a lockout, and use an air spring. So while you don't have the finer adjustments of top end suspension, you should be able to set it up for a wide range of rider weights. The wheels on the Polygon Siskiu use alloy through-axle hubs which are centrelock, and they are laced to an asymmetric Entity rim with WTB Trail Boss tyres in 2.25". They come with tubes, but the rims are said to be tubeless ready. While there is a Siskiu D7 model for $1899 without a dropper post, this model has the added extra fun of a 125mm KS dropper. The lever sits below the bar on the left side, and along with the Entity seat, short stem and wide riser bar it is part of a pretty neat cockpit, with colour matching to the frame and wheel decals that really sets the whole bike off. There is room for a bottle cage, although only small or mid-size bottles are likely to fit. The frame also has a tonne of standover clearance, thanks to the dropped top tube. Cable routing is internal, which is a nice touch, and the back end of the frame has good clearance, so if you wanted to up your tyre size a little to say a 2.35", it should be possible. But that will be tested out later. Overall, the Polygon Siskiu looks to be nicely put together, with updated geometry that suits a 120mm travel bike, and a parts spec that is unlikely to hold you back. We'll have a full review of the bike later this summer. For now - it's time to hit the trails. 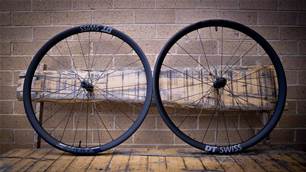