With spring finally on its way, many of you will have started on some training with the aim of taking part in one of Australia’s premier stage race events. There are certainly some great events to choose from, with scenic locations and varied terrain. Whether you plan to race at the pointy end, or simply want to get to the finish line each day, there are a number of important components you should look to include within your training and preparation in order to make your experience that much more enjoyable.

INCREASE YOUR ENDURANCE & BUILD SOME BASE

Before you complete any sort of specific preparation or intensity, your first goal should be to build enough endurance to get through the event. A 4-8 week training block focused on building time in your endurance to low threshold training zones should be sufficient. This phase of training should include sustained intervals of 10-30min length, targeting that mid to high tempo training zone. Such training will push your threshold power higher and prepare the body for higher intensity training in later phases. Since it is a stage race you are training for, it is a good idea to include back-to-back training days in order to prepare the body for this.  If you are a Monday to Friday worker, using your weekend as part of a 3-4 day training block is ideal. 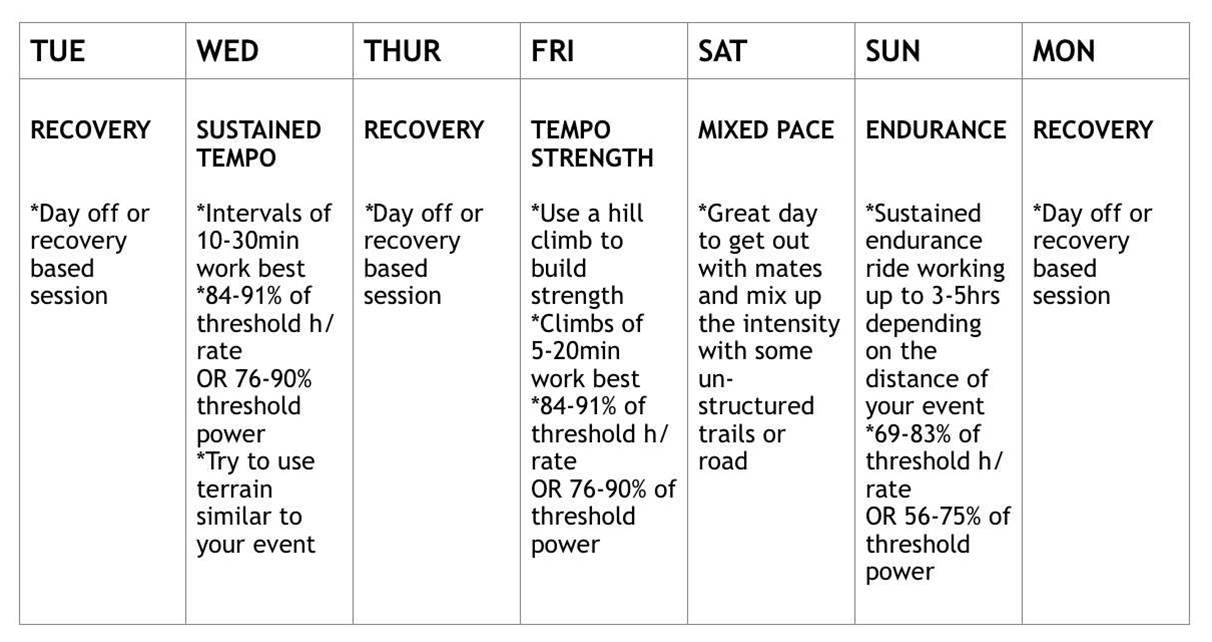 Once you have built a sufficient base, it is a good time to really focus on that high-end power. It is all good and well having the endurance to get through the event, but most of us want to also get to the finish line as fast as possible! I generally prescribe a 3-6 week block of higher intensity; however this also depends a little on an athlete’s specific strengths and weaknesses. This phase of training should include some days of around 30sec to 6min intervals at a hard pace and using various terrain. Such intervals will lift threshold power as well as your aerobic capacity. High intensity bunch rides can also work in well to get the body prepared for accelerations and higher leg speed. Endurance levels should be maintained with one longer ride per week. 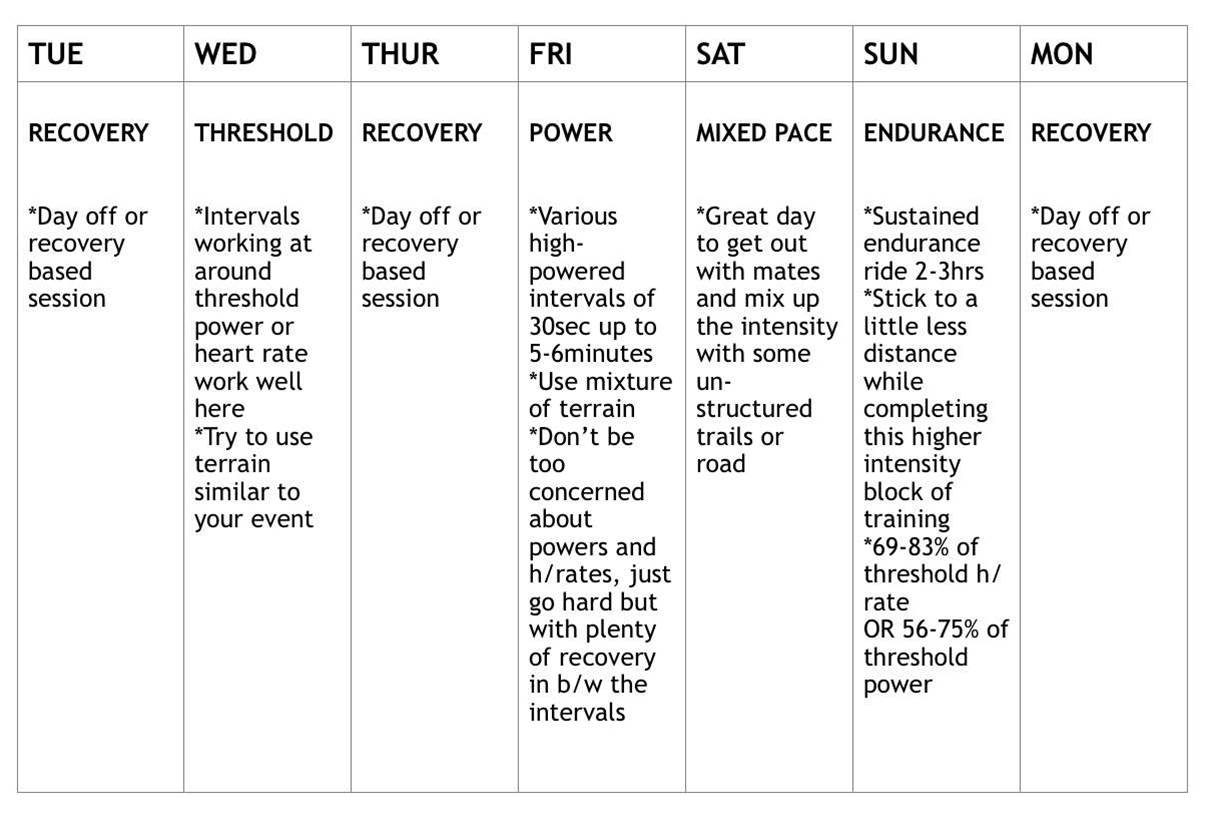 FOCUS ON THE SPECIFICS OF YOUR EVENT

During this last phase, prior to tapering, it is important to prepare the body specifically for the stage race you have chosen. Make sure to check out the course profiles and style of terrain you will be up against and replicate as best you can in your training.

For example; the terrain over in WA for Cape to Cape event is really quite different to that found in Tasmania for the Hellfire Cup event. Much of the racing during Cape to Cape involves riding in bunches with high leg speed and while there are sections of flowy singletrack there is also quite a lot of open style terrain. The trails over in Tasmania on the other hand, are much more rugged and with tighter singletrack and a few more hills to negotiate, you would definitely need to train quite differently.

This phase only needs to be 2-3 weeks, but will be quite stressful on the body. It is often referred to as an ‘over-load period’. If you are training for a 4-day stage race, then you will benefit from at least 1 or 2 weeks of 4-day training blocks. 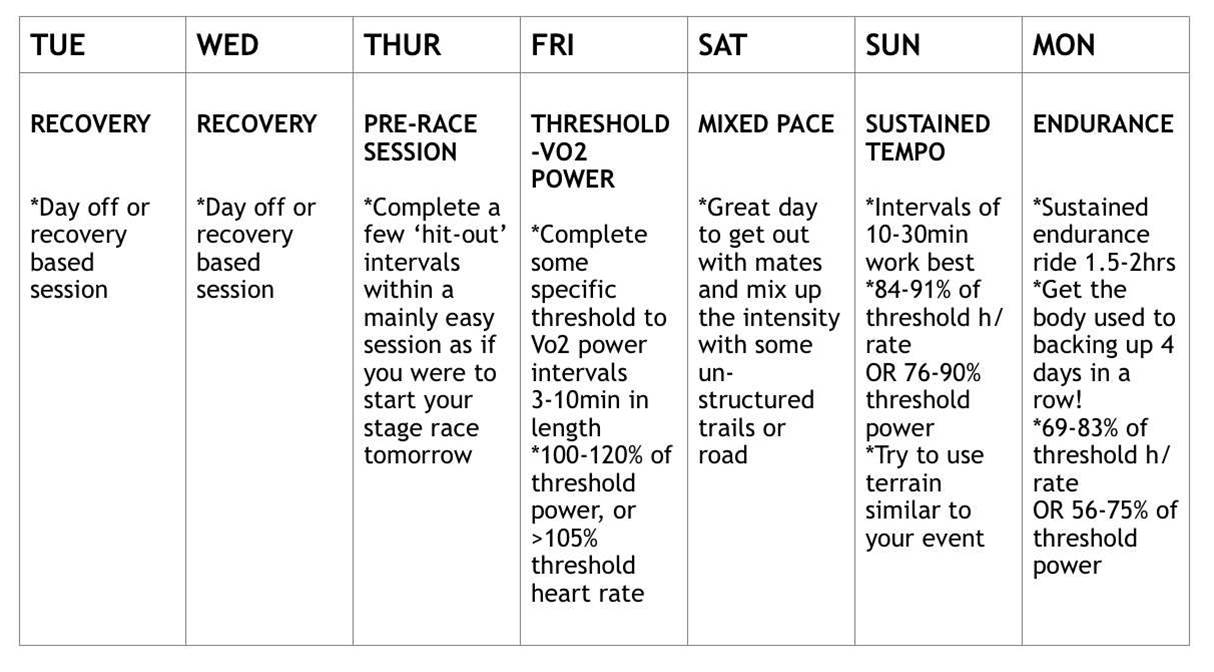 Also remember to practice using your intended race nutrition. It is best to work out in training, exactly which brand of product works best for you in terms of giving you the most sustained energy and most importantly, what your stomach can tolerate. Most nutrition experts will recommend taking on 60-90g carbs per hour of exercise, dependent on your body weight. This can be in form of drink, gels, bars etc. It is very important to stick by this formula during a stage race, as you will not just be fueling for that particular stage but will be keeping glycogen stores topped up for the next day’s racing. 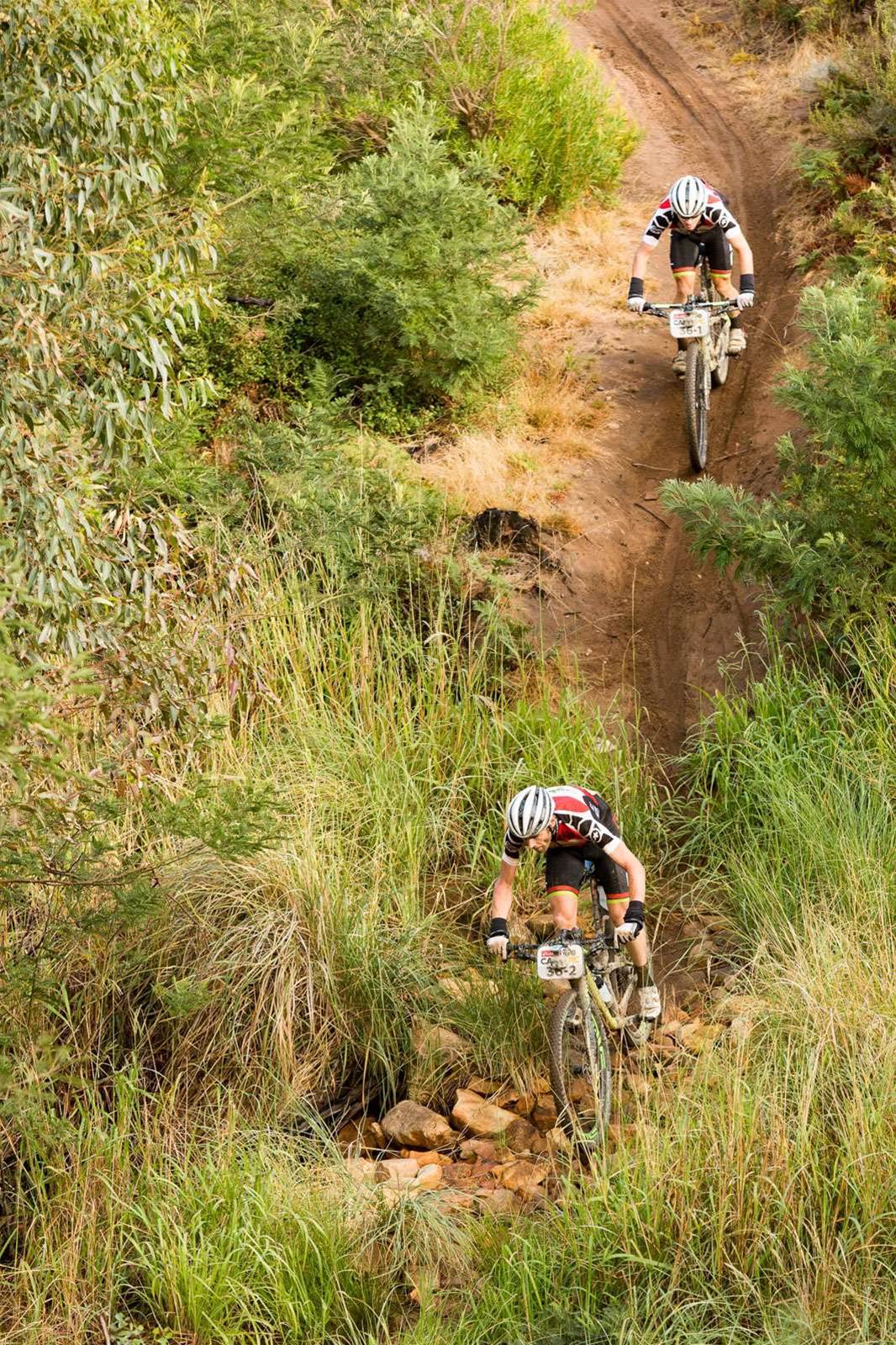 It is most important that you arrive to the start line of a stage race with fresh legs! With each day of racing, your body will become more and more fatigued, therefore you need to freshen up even more than you would for a 1-day race. Generally allowing for a 2-week taper leading into a stage race works best. The main emphasis during this taper period should be on recovery, and then include some “hit-out” sessions to clear the cob-webs and get the heart, lungs and legs firing.

It’s important to note that most athletes will encounter some “hiccups” along the way and it’s quite uncommon for a training program to be completed 100% as planned.  If you can allow for at least an 8-12 week block of training, it won’t matter so much if a few sessions or even a week of training is missed. Aim to go through similar phases as described above and you will be well on your way to a great performance and enjoyable experience in your planned stage race!

FITNESS: Hot Tips from a Coach who has been the Athlete