Epic valleys stretch before you and the mountains above you. It's time to check out all that Verbier has to offer and perhaps swing a leg over a new bike or two.

Verbier sits at 1500m above sea level on a south-facing terrace in the Valais, in the west of Switzerland. With vineyards below, big mountains above, and steep forested slopes in-between - outside of the winter months Verbier has become a mecca for mountain biking. With trails that have suited the Swiss Epic mountain bike stage race, the Grand Raid marathon, and now enduro events and even Swiss national downhill rounds – the real strength of Verbier is variety. With Verbier Bike Park and a dedicated lift system at the heart of the trails, the true expanse of the network is hard to grasp, with over 220km of marked routes that can be accessed with the assistance of lifts and Switzerland’s ever-reliable public transport system.

With such a vast network of trails, and close to 2000m of elevation to play with, it was no wonder that Trek chose Verbier to launch their 2018 trail bike range. Switzerland provided the terrain and climate, and Trek provided the bikes.

If Verbier has a huge variety of riding, this was perfectly matched to Trek’s versatile range of bikes. With new iterations of the ever popular Fuel EX, Remedy and Slash to reveal, Trek also had the new Powerfly hardtail and full-suspension bikes to show off. 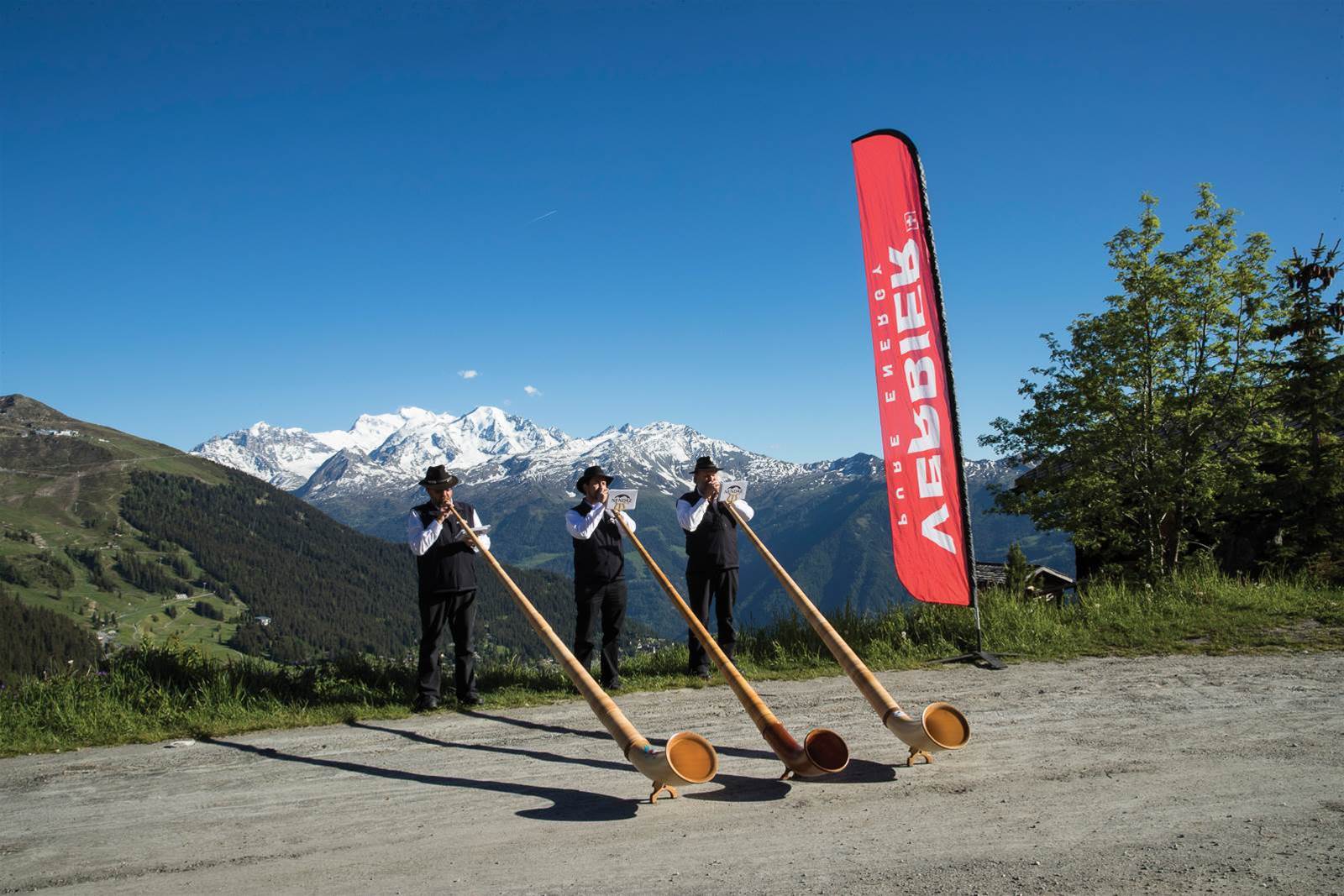 THE MANY FACES OF VERBIER

Drive into Verbier and it’s easy to get a sense of the grandeur of the village, with four and five star hotels lining the streets. The whole village is uphill, as it sits at the bottom of a huge basin. To the right, forests cover the slopes until the treeline at about 2000m, and on the left a vast expanse of grassy slopes have some small farms and are criss-crossed with trails.

The main lift to Ruinettes runs almost from the centre of town, taking skiers, or riders and hikers, to about 2200m and right into the heart of Verbier Bike Park’s 12km of purpose-built trail with beginner, advanced, competition and expert runs. The next lift takes you even higher.

Beyond the bike park, enduro routes (using lifts and public transport to gain elevation) offer rides with over 1500m of descending. On these routes, a mix of small roads, forest roads, walking trails and purpose-built trails combine to take you from high above the treeline and down into the valley.

There are plenty of cross-country routes as well, and while there are flatter routes that can be accessed by the lifts or a bus, there are also routes with plenty of climbing. In fact, one of the trails is up there with one of the best long singletrack climbs I have done – thanks to the views down the valley and across to the Grand Combin at 4314m. 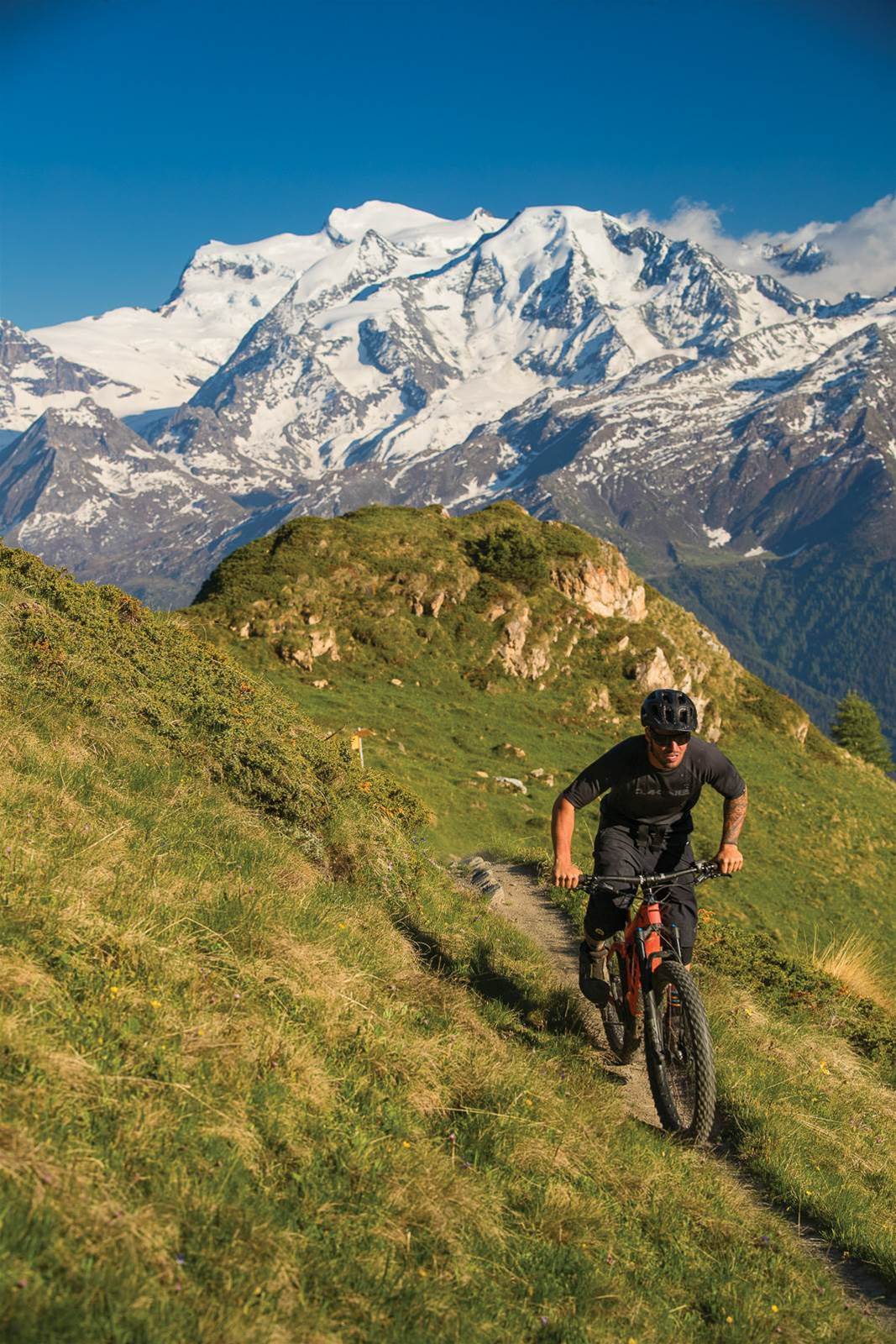 ON THE TRAILS WITH THE TREK POWERFLYS

The last time I visited Verbier to ride in the Bike Park, I was struck by how progressive the trails were, but how restrained the building was. Each stand of forest could only have one trail built in it, and they had to be a very narrow width on the ground. There would be no super highways down the mountain, just tighter, technical trails in the trees and on the ski slopes, with very few intersections with other trails.

The conservative layout, which makes for a great riding experience, meant I was surprised that e-MTBs are permitted in the park. There are four sports stores who hire e-MTBs in Verbier, and you can take an e-MTB on any trail open for riding, and onto any mountain transport too. Bear in mind that the weight of an e-MTB might make this a little more difficult, depending on the size of the rider!

Trek had assembled a range of their new Powerfly FS bikes for us to ride in the park and surrounding trails, and we tackled a range of climbing trails that traversed the steep forested slopes. The old trails are perfectly benched into the green slopes, with dirt that is predominantly crushed rock. It’s grippy yet lets you slide a little, and it drains so well that overnight rain never means you’re off the trails.

Negotiating an e-MTB can seem like a bit of a handful, but we made our way ever higher, getting the knack for how to use the pedal-assist, and having the freedom to bomb some short descents on our traverse, as gaining altitude again was never too hard. 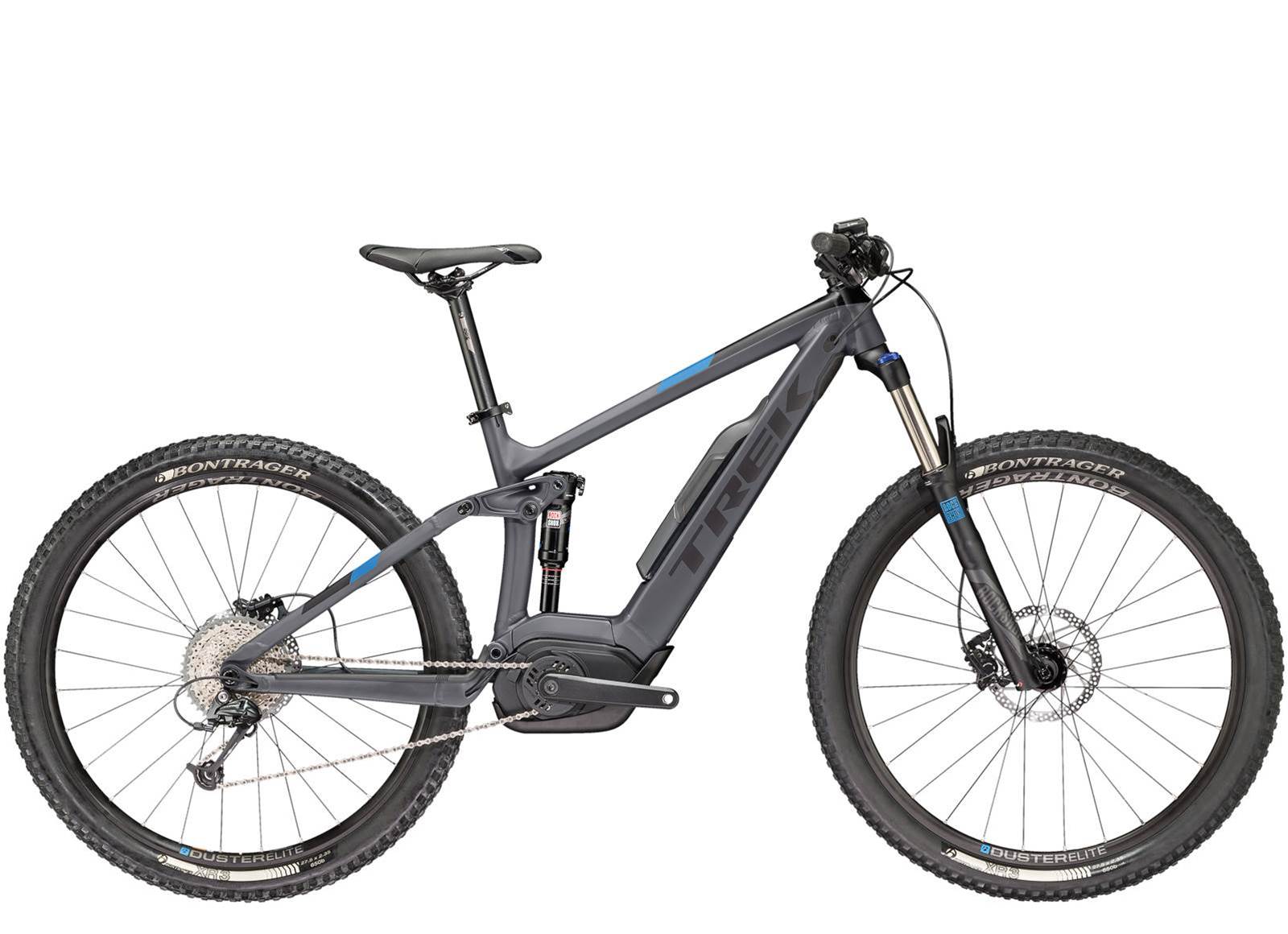 All new for 2018, the Powerfly FS has a lot of similarities to the Fuel EX, with 130mm of travel, Boost spacing, a MinoLink so you can adjust the geometry to be lower and slacker, internal routing, a dropper post, and the KnockBlock headset to save your frame.

The bikes are built around a 27.5+ standard, and come equipped with wide rims that are impact rated for downhill. The battery sits almost flush with the frame, keeping the weight lower for better handling. Check out our full review of the Powerfly FS 7 on page 88.

We’ll get both the Powerfly FS 5 and 7 in Australia, and they sell for $5499 and $6499 respectively. That extra $1000 gets you some better wheels and tyres, and moves you from a Shimano 10-speed drivetrain to 11-speed, along with better brakes and a dropper post.

After a lunch stop at a mountain restaurant away from the main lift, we started our next descent. Although we could have ridden here easily enough along the high access trail that sits right at 2200m, we rode directly, as our Powerflys were our own shuttles. The trails we descended into were a stark difference to what we had been riding. More dirt, more ruts, some mud and frequent changes of direction kept us all guessing. Trees were rubbed and bars were tapped as we made our way down into the next valley near La Tzoumaz. We must have shed about 500m vertical on the steep terrain, until our guides pulled us up to point us back uphill.

Chatting, laughing and sharing near misses on tight corners and through steep chutes, we rode back up with the help of the Bosch motors. A far cry from how a group ride normally pans out on an extended climb. We came back through the steep trails of the bikepark and into the hotel for drinks at the bar. 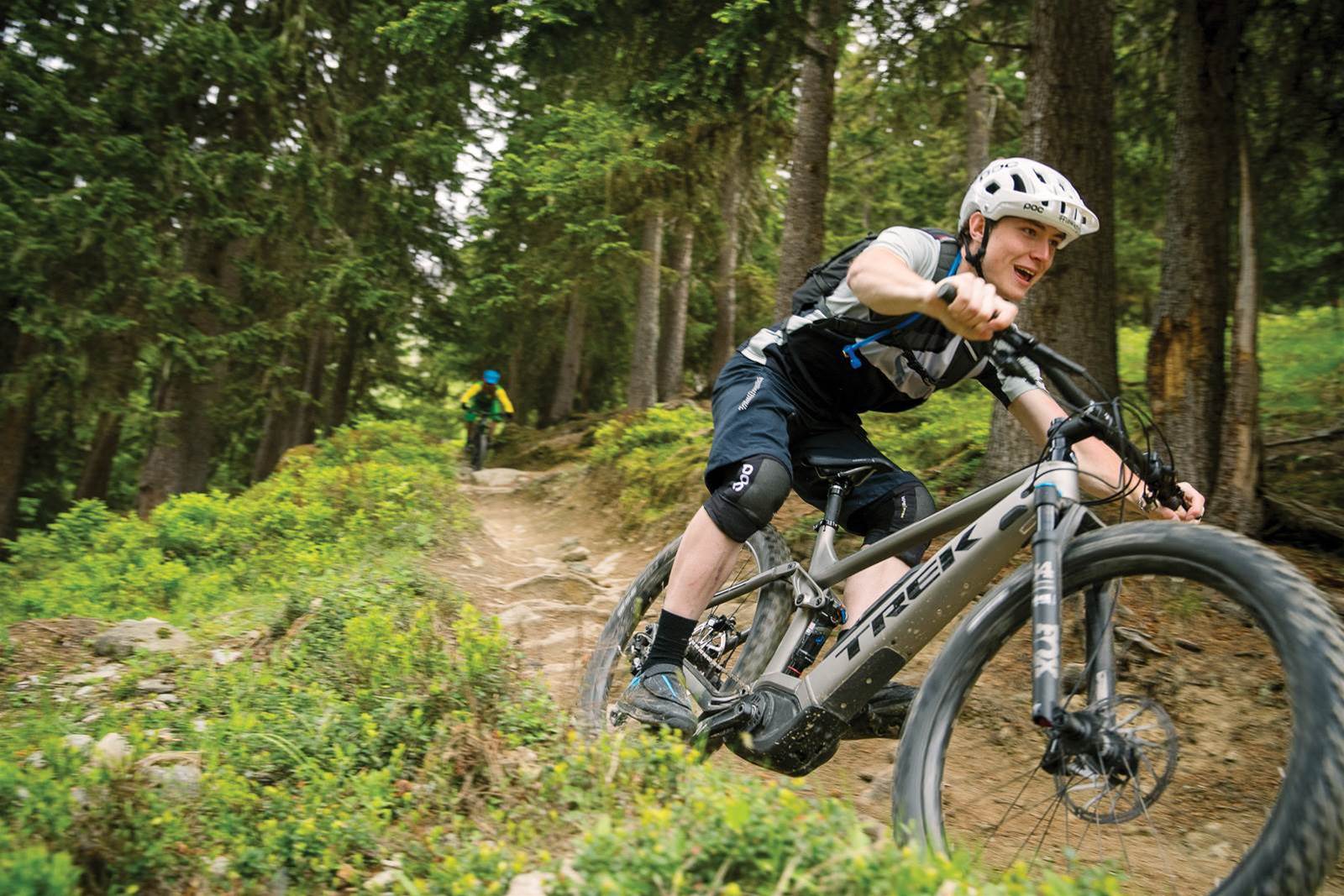 GETTING HIGH ON OUR OWN SUPPLY

The next day dawned with a sky bluer than the day before, temperatures even higher and without a breath of wind. Summer had arrived in the Swiss Alps. While the chairlift was whirring into action while we still ate breakfast, today we would be sent into the hills on either a Trek Fuel EX or Remedy, with the option to grab a lift pass after lunch.

I spent the day on the Fuel EX 9.9. With SRAM Eagle, Fox factory suspension with 130mm travel front and rear, Bontrager’s own dropper post and their wide carbon wheels and SE5 tyres, it was a perfect day to ride in – and out – of the bike park.

While we started in groups, many of us began to splinter off and ride at our own pace. Partly as we had gained a sense of the trails, and also because we all now had very different rates of progression without the pedal-assist and speed limits of the Powerfly bikes keeping us together.

It struck me how different the riding was, back on a purely pedal powered bike. The climbs we had taken the day before were near-on XC race pace efforts to get up. Our guide told us the traverse had been a prologue in a local enduro race – a true leveller that really showed who was fit!

The lighter weight of the Fuel EX was a bonus on the technical climbs, something I preferred to be doing without assistance. And while the descents were still awesome, the longer wheelbase and greater weight of the Powerfly sure made it feel more planted when landing or gapping trail features. The Fuel EX was great, but riding the same trails again the next day it was clear that the Powerfly FS had advantages up as well as down.

A few lifted runs after lunch had us testing the bikes on the heavier trails, until part way down the red run, one of our guides asked: “Would you like us to show you a small trail? Not many people ride it.” We nodded. While assured that the trail was on the map, we skirted across steep, wildflower covered fields, the edge of someone’s back yard, and found ourself at a small trail sign, with a thin ribbon of singletrack dropping into the forest below.

Seats dropped, brakes covered and way off the back, we steered down with our hips, pushing the limits of 130mm 29ers. We stopped twice on the trail before attacking it again, until we came to a stop above a small road. The final corners were beyond us, but the guides made it look easy as they negotiated their bikes around the tight corners hanging above the road.

“We can carry on down to Le Chable, but it’s a long way back up,” stated our guide. Le Chable was still another 500m below, and we had just dropped about 700m already. We rode back towards the village, regretting our decision to not have some pedal-assist on this ride, as our shortcut took us on a 25% tiny access road into the village. This final trail, away from the limits of the main bike park trails, really set the trip off for me. Four of us riding a sweet trail, in the sun, and then riding back for some beers afterwards. And I think I only rode 10 per cent of the trails available!

Flying to Geneva is easiest, but Zurich works as well. Then take the train to Martigny, to Le Chable, and jump on the cable car up the mountain.

Verbier Bike Park opens in early June, but the top sections open closer to July. Unlike nearby bike parks in France, Verbier stays open right until the end of October.

Switzerland has four official languages, but this part of the Valais speaks French. English is very common in hotels, bike shops and restaurants. As always, common courtesies in the native language are good to know.

This depends on what you want to ride. A trail bike will be great, but if you want to just stay in the park a downhill bike or slack 160mm bike would be a blast. There’s plenty to ride if you bring an XC bike. Or, there are four stores that hire bikes.

Staying in Verbier can start from about 100 CHF (approx $135) in a studio apartment per night, or about 55CHF ($75) for one person in a hotel room with breakfast. But, the sky is the limit if you want to treat yourself. Try Verbier’s website for accommodation options.