Trek needs no introduction and when they announce an all new model, it’s a safe assumption that its going to be an outstanding performer. With the success of the previous iteration of the Top Fuel, XC bikes have continued to evolve and riders are demanding more out of their equipment. Call it marathon, call it down-country, call it mountain biking. Whatever you call it the all-new Trek Top Fuel is highly capable.

Sitting between the Fuel EX at 130mm travel and the IsoStrut equipped Procaliber soft tail, the Trek Top Fuel bridges the gap between XC racing and all day trail riding ability. It has some serious racing pedigree with some fun thrown in. 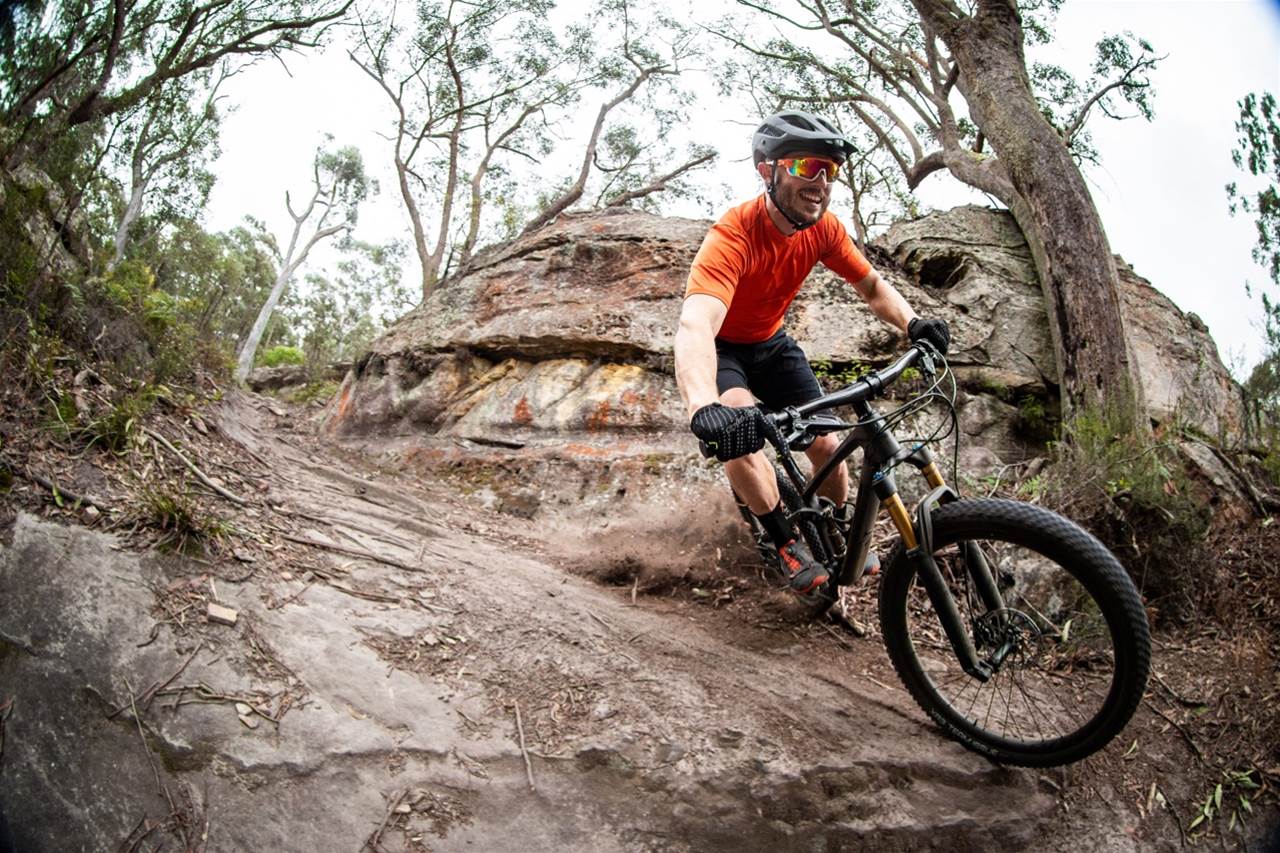 Trek Australia will be bringing in the all alloy Top Fuel 8 along with a myriad of carbon options with offerings from either SRAM or RockShox with pricing starting at $4499. If you still can’t find the colour or spec for you, then enlist Trek’s Project One lab and get creative as the options are seemingly endless.

Trek is confident they have created modern short travel trail bike that can dip its tyres into several disciplines in particular endurance style events. And so are plenty of other brands who have bikes that line up against the Trek Top Fuel, like the new Norco Revolver 120, Scott Spark, Santa Cruz Tallboy and more.

As with all Trek frames, the cleanliness and attention to detail at all price points is hard to ignore and with our test Top Fuel 9.9’s full carbon frame there is little out of place right out of the box. The carbon frames utilise Trek’s OCLV (Optimal Compaction Low Void) which with aid from finite element analysis lays more fibers where they are needed and less where they're not. In this way weight is stripped where possible to create a lightweight yet durable fuselage. At a glance, the large OCLV Mountain Carbon downtube looks just like that of the Fuel EX, Trek’s 130mm trail bike and now equipped with a Knock Block steering stop has a straight downtube from head tube to bottom bracket. Looking over the entire frame, many of the tubes are straight and have an almost square profile moving away from the swooping lines and round tubes of old. 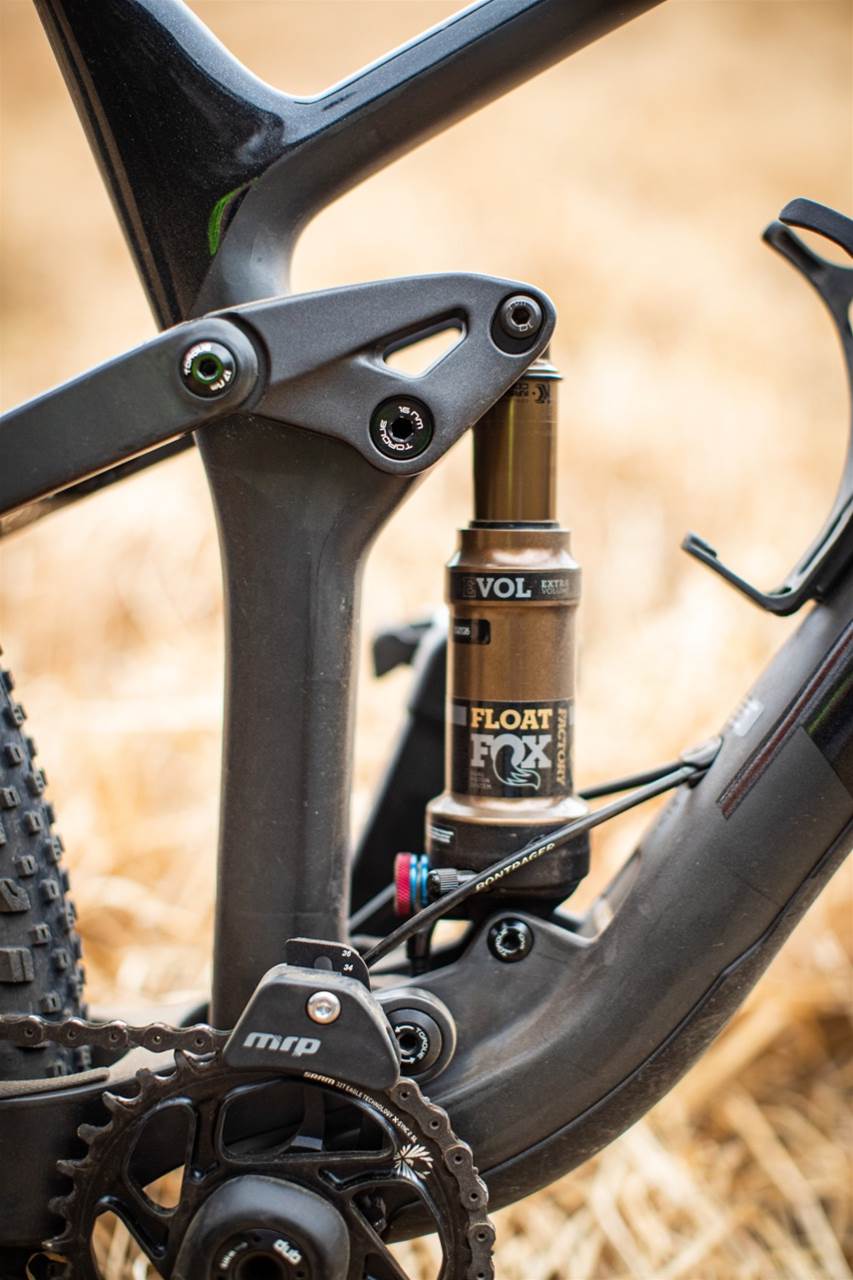 Top Fuel retains the dual lock out and by flipping the rear shock and has a much neater routing of the lockout cables and uses the RockShox Twistloc dual lockout which is a huge improvement on what previous iterations used. The mix of RockShox and Fox here snaps effortlessly back into the open position with the press of a button. On the subject of suspension, we see the disappearance of Trek’s proprietary Re-Aktiv regressive damping found in their Fox shocks, now when you twist that dual lock, the bike is locked and ready to attack with no ifs or buts. Cable management is taken care of by updated Control Freak routing, in particular the cable housing clamp on the top of the downtube to stop housings being pulled through and bunching up from rear suspension activation.

Adjustable geometry is as simple as a flip of the Mino Link which has moved location from the seat stay and EVO link interface to the top shock mount making the change easier than ever. The high position keeps the BB 6mm higher and the steering sharp with a head angle of 68 degrees, flipping the chip into low slackens the geo out by half a degree at 67.5 degrees. With years of pioneering 29 inch bikes with Gary Fisher at the helm, G2 or 51mm fork offsets have been a staple on all Trek 29ers, however the Top Fuel’s fork rake has been reduced to 44mm thanks to growing reaches found across the industry. This means that slack head angle keeps things steady when pointing and shooting at speed, but keeps the front end really manoeuvrable at low speeds and when climbing. 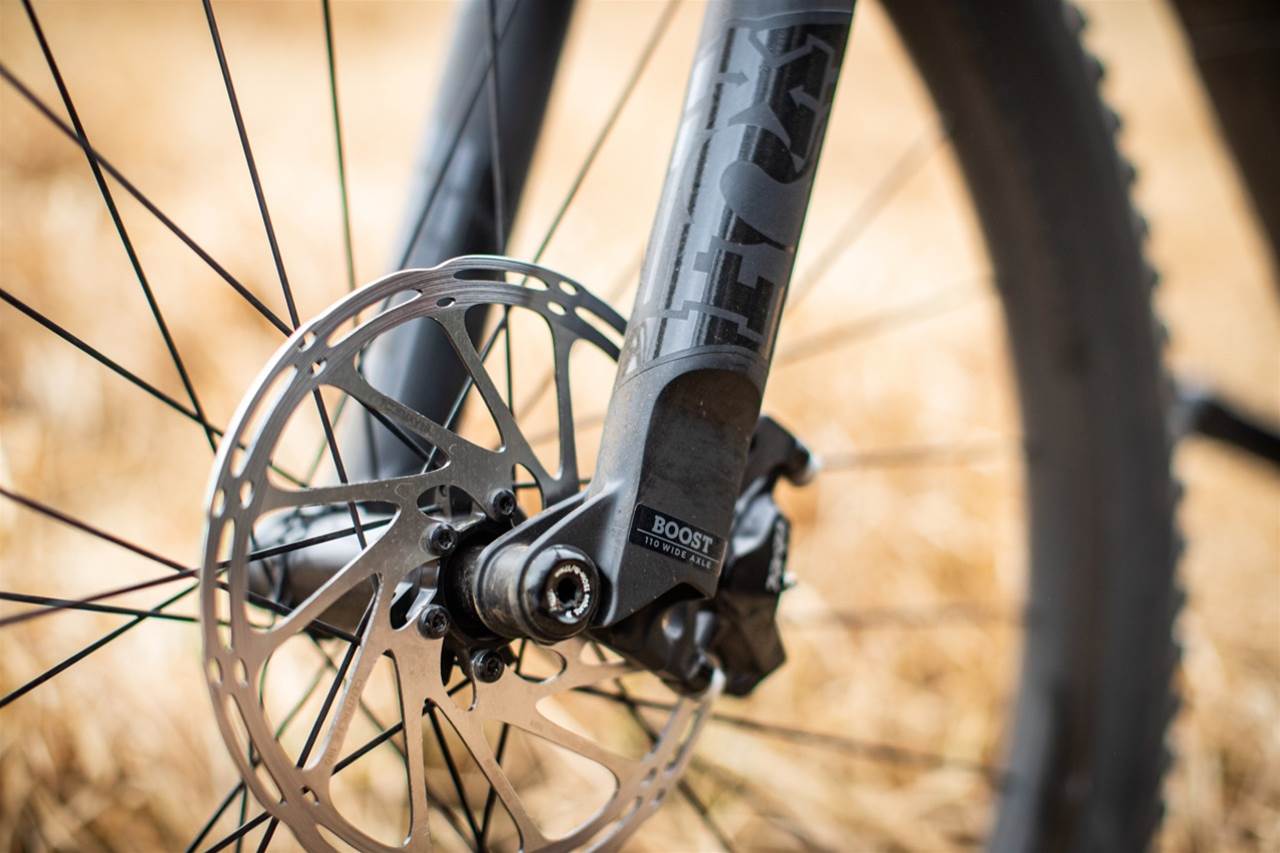 Setting up Treks is always super simple, using their online suspension calculator that gives you both pressures and suggested compression and rebound adjustments. I have always found the calculator to be on the soft side by about 10-20% for my own riding style, but it remains a great reference and starting point to get out and hit the trails as soon as possible with minimal fussing about. 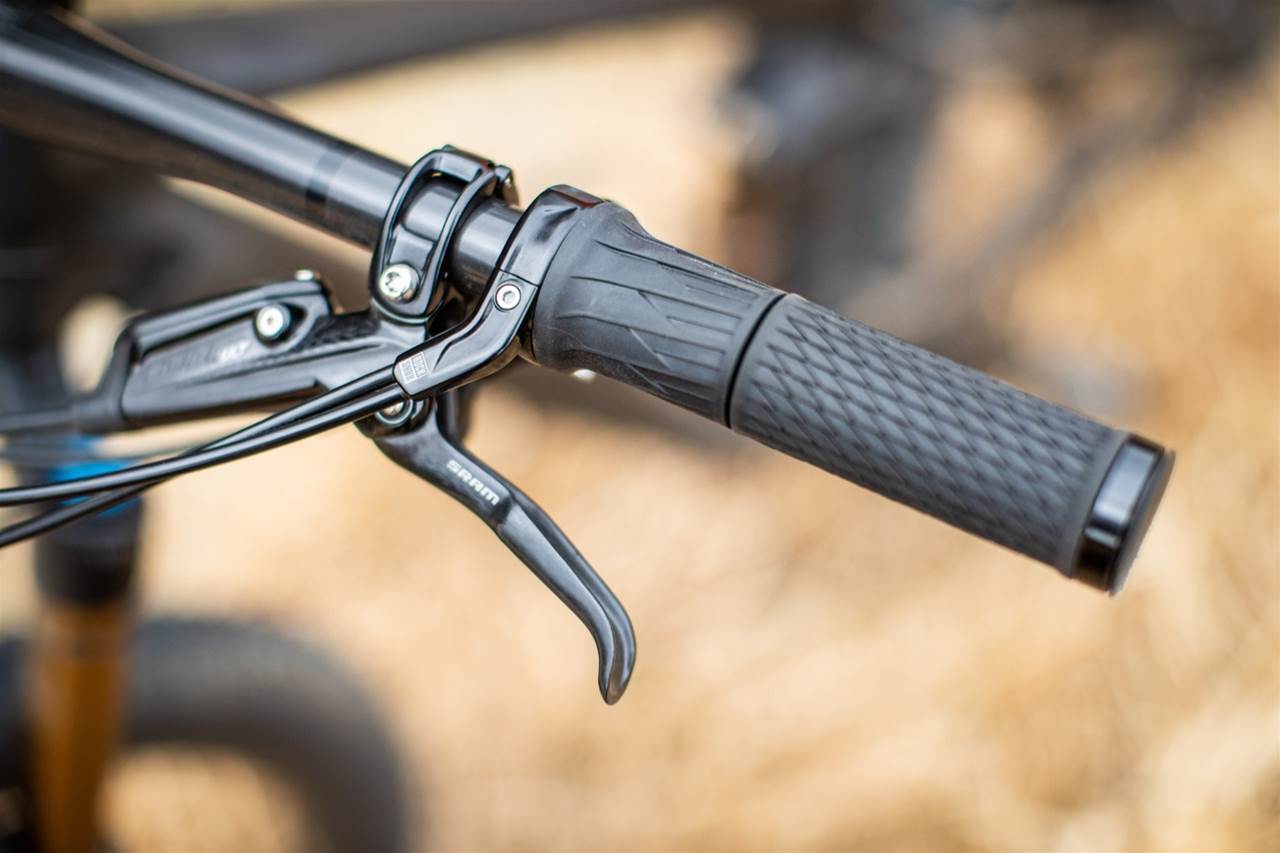 Our M/L Top Fuel 9.9 setup tubeless with 100ml of sealant in both ends weighed in at 11.26kgs with a Trek Batcage, which is impressively light considering the features and overbuilt appearance.

There are two things that sprung out to me when building the Top Fuel, where is the lunch box or what Trek call their in frame storage system, BITS? We saw it drop on both the Domane road bike and the new Fuel EX, an endurance/trail bike with no frame storage seems like a missed opportunity. 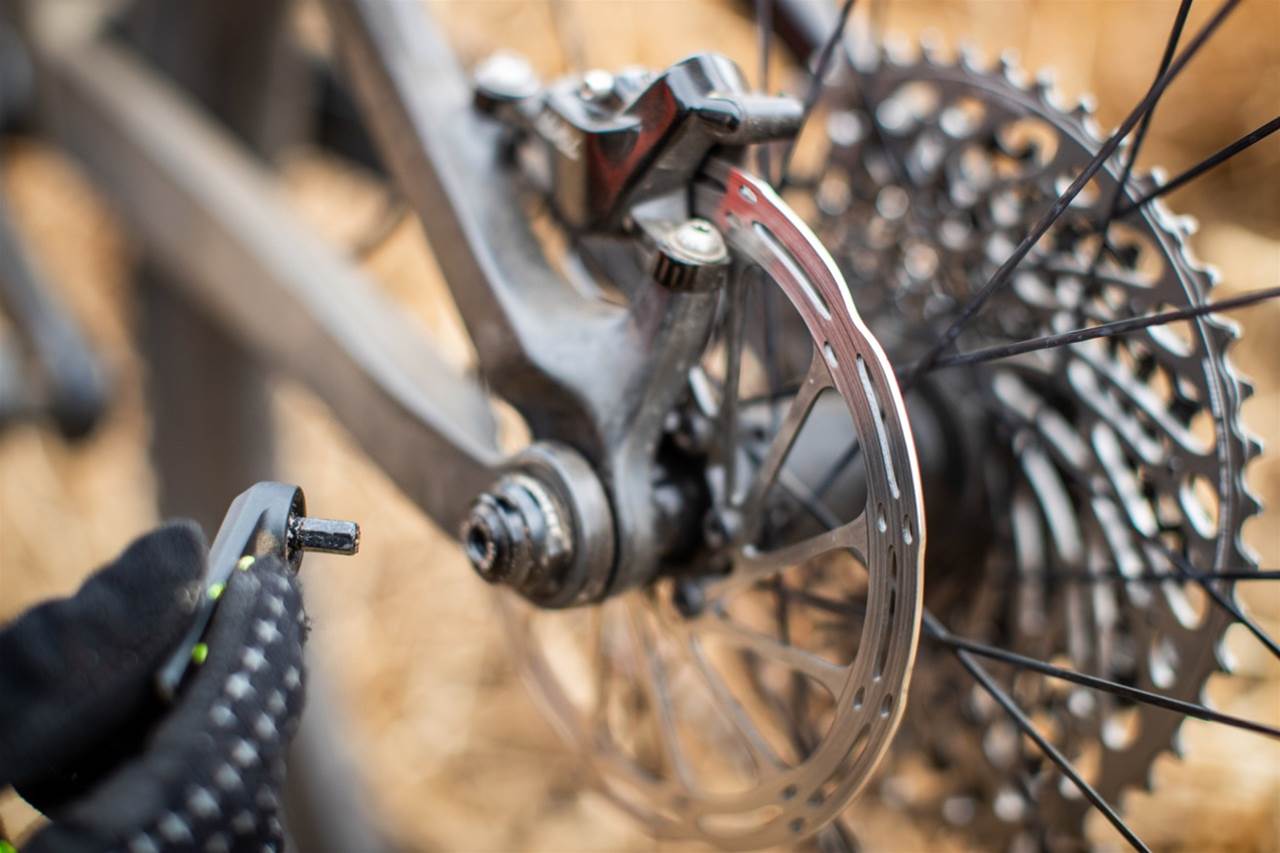 Secondly the chainstay has a very direct path from the main pivot to the ABP and rear axle. This straight line obviously attributes to the high stiffness of this scant rear end but sits extremely close to the chain even with a 32 tooth chainring when in the harder gears. What about riders running a 30 or even 28 tooth, will the closer gap make trail noise quieter with the chain having less run up before slapping the stay or just hit more frequently and make the same amount of noise, I would ride without an iPod and find out! 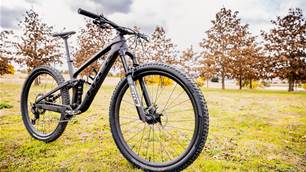