Whether you love them or loath them it’s no secret that eMTBs have been on the rise here in Australia and around the world. The bicycle industry has been pushing them pretty hard and they have seen the most amount of growth out of any genre of mountain biking that’s ever existed. It’s only natural to want to work to make them the best they can be. Whilst improving the batteries and electric drive units is a significant way to make these bikes better, there are many other bit and pieces on eMTBs that need to keep up. We already have eMTB specific brakes, wheels, drivetrain, suspension, saddles and now finally, tyres. I know, I also cannot believe they went to saddles before tyres either.

In my opinion the biggest issue with eMTBs from an advanced rider perspective was always tyres. The contact that you have with the ground is fundamental to the riding experience. Now I’m not saying traditional non – eMTB specific tyres are completely useless on these much heavier bikes they just aren’t the best they could be. Plus sized tyres and eMTBs gained mass popularity around the same time and wide rims also gained momentum during a similar period. So it was natural and seemed like the perfect solution for them to do double duty on an eMTB as well as non-assisted mountain bikes. So eMTB manufactures quickly specced just about all pedal-assist bikes with 27.5 x 2.8” tyres on 35mm wide rims. The extra traction needed for the extra power delivered by the motor was there and most people were happy. There was stability, there was traction, there was pedal-assist. It was great!

However for more advanced riders that wanted the pedal assistance to get them to the top of the hill quicker so they could smash descent after descent, not everything was so awesome. These riders noticed that the reasonably thin walled plus sized tyres made for regular weight bikes weren’t holding up.

Burping and tyre wall slices and holes were common place and damaged rims were a very expensive consequence. Traditionally 1kg for a reliable mountain bike tyre was heavy so tyre manufacturers tried to keep these new much larger tyres around that weight. And for a beginner on a fairly light plus sized mountain bike it works, it keeps the weight down where it matters. Lower rotational weight and all of that physics stuff isn't made up, lighter wheels can and do make a bike feel better. But the same worries are just not there for an eMTB. Weight, within reason, becomes far less an issue when you have the pedal-assist to help you overcome it. A thicker, and stiffer wall tyre was needed. Some riders moved to 2.5” downhill tyres but one bikes designed for a 2.8” tyre that reduced the bottom bracket height, and usually had the sidewalls too exposed on a 35mm rim as well. It was a bodge, not a solution. Finally German tyre manufacturer Schwalbe released the Eddy Current, an eMTB specific tyre that comes in 29” or 27.5” size with seperate front and rear tyre tread patterns. This ticked the box for just about any riders needs on a longer travel 29” or 27.5” eMTBs. With 2.8” widths for the smaller 27.5” tyre and 2.4” and 2.6”widths for the larger 29” tyre. This is spot on for many of the modern mixed-wheel size eMTBs like the updated Pivot Shuttle or the YT Decoy. The front tyre sports an open tread profile and aggressive block configuration to give precise steering and control while the rear features extra wide and chunky blocks for the added traction a pedal-assist bike needs to deliver it’s bonus power. This means all that precious power from the motor of your choice is delivered as efficiently as possible to forward momentum.

Treads and widths aside, to me the most important factor for an eMTB tyre is the casing or tyre carcass. The Eddy Current has five fabric layers to aid in rigidity and strength against punctures and tubeless tyre burping. With it all wrapped up in Schwalbe’s soft compound Addix rubber.

Schwalbe were kind enough to loan us a set of the 27.5”x 2.8” Eddy Currents for our BMC Trailfox AMP test bike. The bike and tyres were to be tested during the EWS in Derby, using it as a tool to get to all the spots on course to take the photographs you saw in the last issue of AMB. As a 95kg guy with a 15kg camera bag I’ve always had issues with destroying tyres and rims and that was amplified once I started using eMTBs for work. So for the first time ever I smiled when I saw that these tyres were a full 500g per tyre heavier than the ones we had pulled of the stock test bike. At 1.48kg per tyre it is clear Schwalbe understood that weight wasn't the priority. The tyres set up tubeless perfectly to the DT Swiss H1700 eMTB wheels and at 35mm rim width the tyres measured roughly 72mm for the front and 76mm for the rear. Schwalbe has got a lot of inspiration from the moto industry for these eMTB tyres with tread pattern, and they are not the only ones. Many manufacturers are now putting 27.5” wheels on the rear and 29” wheel up front. Mixed wheel size is also the most common practice for dirt bikes. One of the many marketing phrases used by Schwalbe for the Eddy Current is “Wide on the front and wider on the back”, differing from a sport like DH and XC where it was traditionally a wider tyre up front for steering and narrower on the rear to give less rolling resistance. So it’s obvious when a motor is added into the equation the wider tyre on the rear is for traction when climbing and dropping those enhanced watt bombs is a good move. On the trail the Eddy Currents were amazing, previously photographing events like an EWS on an eMTB just added increased stress to an already stressful job. The problem of getting a flat at an inopportune time was a worry. With an already jam-packed bag, carrying many spares is not really an option. So, I’d go to my default and run nearly 30-40 psi to prevent doing any tyre damage. Using such a high pressure definitely effects the ride feel but that’s not what I was there for. The Eddy Currents could handle a much lower pressure of around 15-20 psi and I didn’t have any issues. With a 15kg camera bag on an EWS trail, being able to ride the bike with confidence and control was a game changer. There is nothing quite like crashing an eMTB as a photographer in front of an EWS crowd. Without my camera bag on a home trail it was an awesome experience, previously I would have nursed the bike through anything technical and it kind of started to feel like I couldn’t ride like I wanted too. Most importantly I couldn’t ride how I would ride my normal bike. The Schwalbe Eddy Currents have pretty much changed that thinking. I can run a much lower tyre pressure and not have the same fears of, will I burp the tyre, tear a sidewall, destroy another rim, and have to push my eMTB home. Now to say I had zero issues in the few weeks that I tested the tyres would not be a hundred percent correct. Although the fact I burped a small amount of pressure out of the tyre maybe twice and saw slightly more wear on the rear tyre than I would have expected. The fact that these were literally the only issues blows me away. These issues on any other tyre review would go un-noted, it is accepted as the norm. It might seem that tyre security and protection is all the Eddy Currents have to offer. The tread pattern is not ground breaking but it works. It’s built for the task, wide knobs on the rear for traction and well supported corner knobs on the front for control. The soft Addix compound is awesome and predictable, it does suffer with longevity issues as any soft tyre will with technical riding… but it’s worth it.

If you’ve previously had tyre issues or plan or riding your eMTB a lot and you want to be able to get most out of the bike, then I’d highly recommend the Schwalbe Eddy Current tyres. The stability and protection is literally second to none, while they still retain the control, predictability and confidence that Schwalbe is well known for. 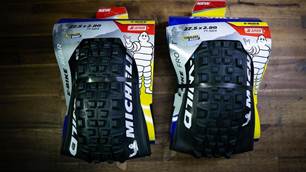