Here's a no expense spared eMTB that aims to ride like any other trail bike, the Pivot Shuttle!

The Pivot Shuttle I had on test was a size large and with a modern 465mm reach, and it kept me feeling well centred on the bike and able to position myself where needed on the trail. The short 437mm rear end, longer reach and 65.8 degree head angle does make it feel just like many of the trail bikes we have embraced in recent years albeit with the addition of more weight. It is obvious that when fired up climbing is what the Shuttle does best, taking fireroads in its stride and making singletrack climbs fun. When climbing on our home trails at Stromlo Forest Park where grip is low and the climbs gradual and winding I found the trail mode far more appropriate than boost. Thanks to the short back end and so much torque on tap, the Pivot Shuttle wants to unweight and lift the front wheel pushing it straight and running wider than the trail could allow. After stopping, sliding the saddle forward by 15mm it corrected this issue nicely and had enough weight over the front to rail turns without issue. Pivots always pedal well while seated and during out of saddle efforts and the DW link equipped Shuttle with its 74.25 degree seat angle is no different, with minimal bogging down into its travel under load felt. However there is some flex in the rear of the bike which can be felt when driving hard through banked climbing turns. The Pivot Shuttle's bike like geometry and characteristics come into their own when changing directions, especially on technical climbs. Most eMTBs have chainstays that are 20mm – 50mm longer than the Pivot and it's noticeable. As class 1 eMTBs require the pedals to be turning for the system to work, this agile bike makes getting around technical sections much easier thus keeping the motor “on the boil” and the assistance constant. Braking lightly into uphill corners and dragging the rear to control speed mid corner really helps in finding this point where you have assistance and control. Sharing ride characteristics with the Mach 5.5 is first and foremost why the Shuttle rides so well, Pivot have actually managed to keep it balanced enough to leave you feeling a part of the ride and not just a passenger. Finding those hard to get to, technical climbs and descents has never been this much fun and as you will be riding them more often skills are going to develop fast! With the motor and battery as low as possible and possibly the shortest chain stay of any eMTB the Shuttle manuals and negotiates technical descents with ease, finding grip everywhere with the huge footprint, carbon frame and quality suspension. Even when passing that limited 25kmh assistance mark the Shuttle performs exceptionally well, albeit it a tad heavier than “a bike” and less of a handful at lofting jumps and hitting turns than you would imagine. Pivot have built an extremely well balanced bike with a motor rather than a cumbersome and lumbering eMTB that’s awkward to manoeuvre through technical singletrack. The Shuttle remains pleasant to ride with minimal to no assistance and is exactly what was set out to achieve, an enduro/trail bike that rides further and harder.

My time on the Pivot Shuttle has been relatively uneventful, no bolts came loose, no creaking developed while riding - nothing. I did experience quite a few flat tyres and for a change, more front than rear. As eMTBs are heavier and harder to stop, when braking hard and negotiating rough sections a tyre with more casing rigidity would be welcomed both front and rear. With a couple of tyre plugs and 100ml of Orange Seal sealant in each tyre and I could always ensure the tyres were air tight again. But having a tyre like the Eddy Current's tested in this issue is not a must have but if your local trails are rocky, an upgrade that may be on the cards. Early on I did note that there was some flex under load in the rear of the bike and while it is not overly noticeable when riding on the trail, it is noticeable when landing down on the flat and giving it the beans. Everything was torqued down correctly, there was nothing loose just lots of torque in a lightweight trail bike chassis. The Pivot Shuttle is the lightest eMTB we have tested, and that will mean a lot for some riders. But I think some extra layers of carbon for a little more chassis stiffness would suit the ride I like from a long travel eMTB. The Pivot Shuttle is at the forefront of current eMTB technology and is an exceptional trail bike in its own right. Riders looking for a refined eMTB with handling like their trail bike, ready to take on both technical and flowing singletrack then this could be the eMTB for you. The Pivot Shuttle is stretched when the going gets too rowdy on bike park style terrain. If this will make up a large part of your self-shuttling action then a beefier option may be more appropriate. With a retail price of $14,999 and only one model currently available, we would love to see this platform expand and pave the way for more great handling eMTBs from Pivot. 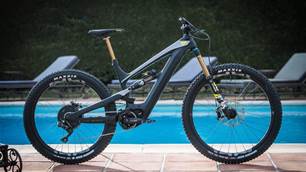