A small trail bike or big XC rig? Testing the Merida One-Twenty 8000 to see where it sits!

Merida have been making bikes since 1972 out of Taiwan and established their own brand in 1988, and while not being known for making the sexiest bikes in the past, in recent years Merida have been slowly taking steps to improve their range and offering in both mountain biking and road. They are actually one of the largest bicycle manufacturers in the world producing over 2 million bikes a year, including manufacturing for other bike brands. They can compete on value with other big brands because they run their own factories, and have good buying power to boot. In Australia I feel like they have a bit of an image problem and not seen as a brand to aspire to - so Merida may not be on the list of a lot of the established or more experienced cyclist, but maybe they should?

The One-Twenty 8000 is their do it all light trail bike model packing more travel and capability for descending and taking hits than their XC bike. Merida have two more longer travel models with 140mm, and 160mm of travel. In Australia the One-Twenty 8000 is the top of the range model although overseas there is a full XTR slightly more XC focused version with lighter 120mm forks that tops out the range. Of the 5 models of the One-Twenty offered in Australia, this is the only carbon framed version, the rest all being built with Alloy frames but all packing 130mm travel forks rolling on 29” wheels and delivering 120mm of suspension from the frame. On this model Merida have gone a bit more aggressive in their specs compared to many other brands, putting downhill powered SRAM Code stoppers hooked up to 180mm rotors front and read. The beefy RockShox Pike RTC3 forks and some strong but light carbon wheels with 29mm internal width are all part of that build, as are the aggressive Maxxis tyres.

With bikes like the Giant Trance Advance Pro, Norco Optic, Trek Fuel EX, and Specialized Stumpjumper ST 29 all offering similar travel platforms and spec, the Merida's only challenge from a value and parts spec is from the Norco Optic C1, which retails for $1000 less but only has GX Eagle and NX specs not the XO1 Eagle, plus the Merida also comes with a great set of carbon wheels over the alloy rims on the Norco.  Equivalent spec bikes from Giant, Specialized and Trek are all much more or have cut corners on the specs to make up the price.

At first glance the new One-Twenty with its full carbon frame has much improved aesthetics. The down tube is very wide but has quite a flattened profile, the seat and chain stays are constructed with carbon, and have a generous curve for heel clearance on the boost spaced frame. There is good frame protection on the chain stays and down tube/bottom bracket area to protect from wayward rocks and sticks damaging your investment. 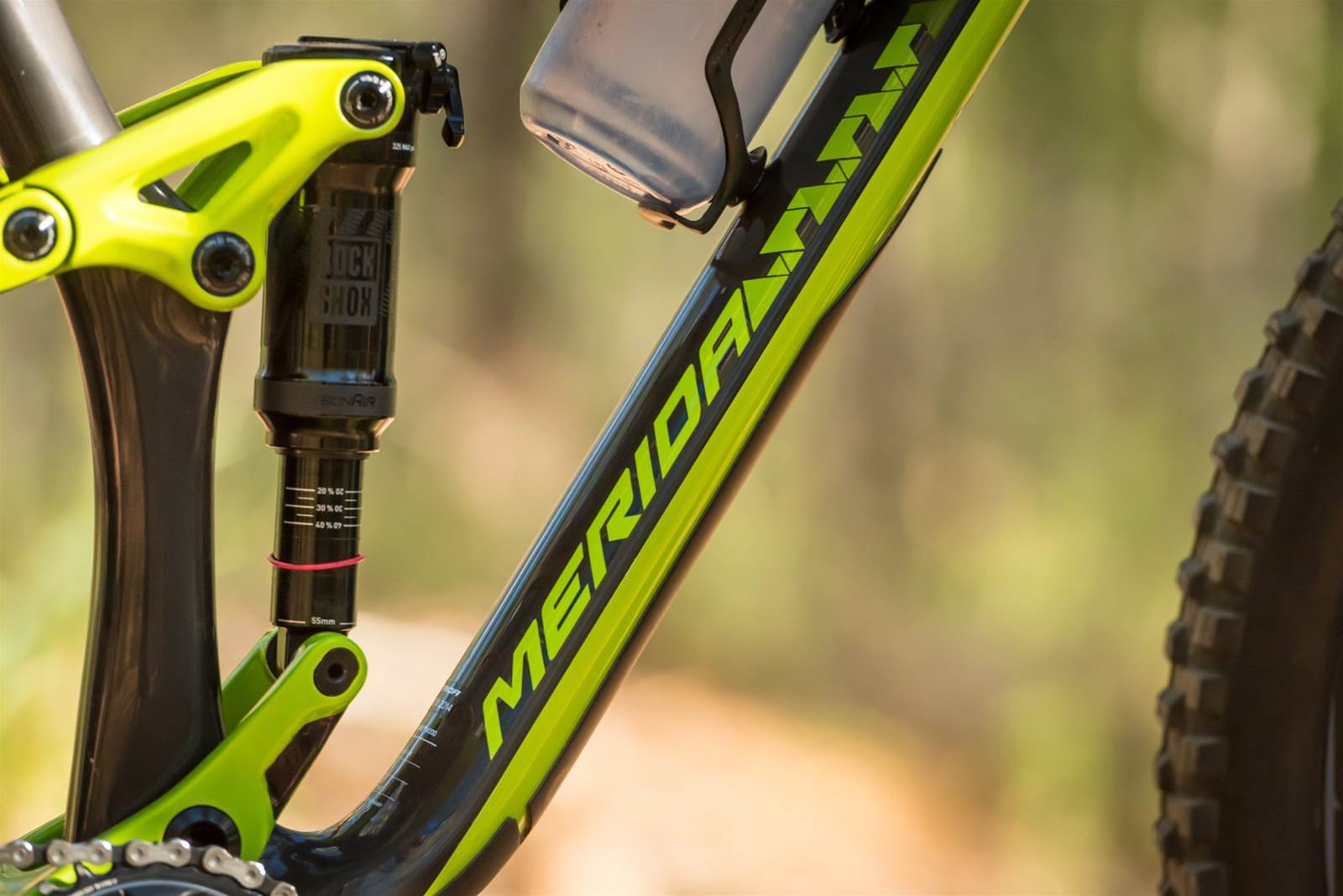 The Float Link suspension is quite similar to the Trek set up with the top of the trunnion mounted shock connected to a rocker link and the bottom to the extension of the chainstays past the main pivot. It provides a supple and responsive first part of the travel, but reaches a nice platform to get some pop with and make it easy to pick the bike up and move around. I set up the travel at just over 25% sag and was happy with that the whole time I had it. I reached the bottom of the 120mm several times but never with any sort of horrible thud.

Thanks to all internal routed cables things are nice and neat, although one peeve is cables came very long and untrimmed and the rear brake has come routed down the left side of the frame. In a country that mostly run their rear brakes on the left it would be good to see the hoses routed the right way. This is something a good shop should remedy for you on build up though. There is no remote lock out on either fork or shock, which is a good thing in my book, as with the dropper cable and brake cables already long we don’t need any further cables making a birds nest. The rear RockShox lever is easy to reach to quickly adjust the suspension on the fly if needed, although I didn’t notice a great deal of difference from open the pedal position, although it firms up almost completely on lock. I find on most bikes though once you go all the way to lock you tend to get tyre bounce come through so I tended to just keep it on Open or Pedal mode. 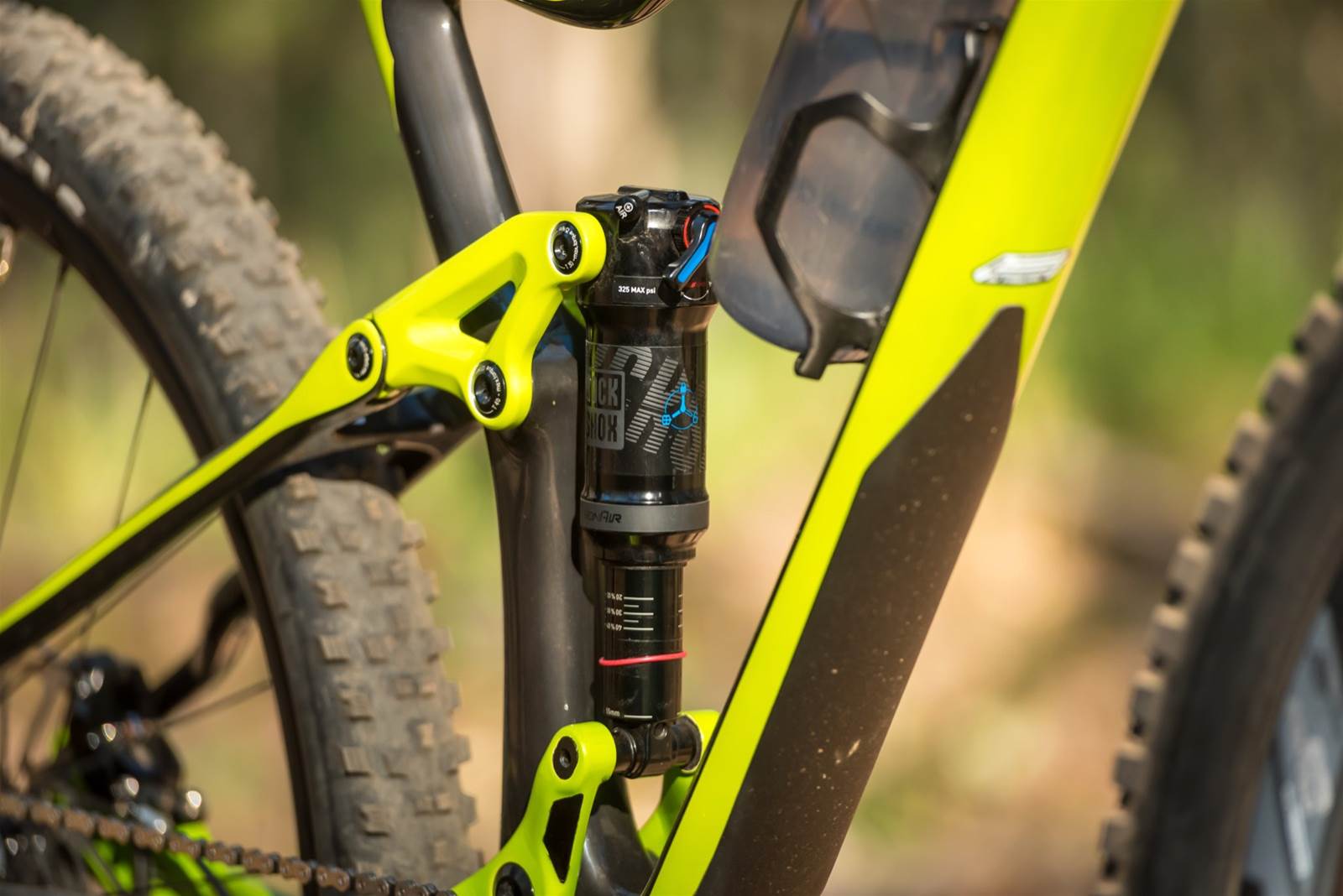 The green of the Merida may not be everyone’s cup of tea, but I really like the graphics down the top tube and the metallic fleck that shone through in the light. Merida have made an effort to improve stand over clearance with a sweep in the top tube too, but my short legs for my 181cm had the 150mm KS Lev fully slammed to get the correct riding position at full extension still, although that is not too uncommon for me.

The main point that stood out for me was the part selection for a bike with just 120mm of rear travel, with Merida opting for downhill level brakes, and an all-round beefier selection of parts like the Pike forks and the Minion front tyre. Although tyre choice was interesting at first glance, with the Minion DHR 2.4” set up on the front, and the Forecaster 2.35” on the rear. The only reason I can think of why they selected the DHR on front over the DHF was that perhaps the DHR rolls a little faster, but still gives great cornering traction. The Forecaster tread pattern works well in loose conditions, but perhaps may not be the best choice depending on the terrain in your area. Set up was as simple as adjusting the seat height, getting the levers and gear positioned to my preference, I like to run them both pretty in board and setting the sag up on the suspension. I made some minor rebound adjustments over the test period, and tweaked the compression setting a little on the forks and that was it. Everything was left standard, we just got the tyres set up tubeless with some Orange Seal sealant and I was off and riding. I thought I may not like the 35mm clamp bars and stem, but the rake and position felt good and it wasn’t overly stiff feeling. I usually prefer to run 31.8mm clamps to give me a little more compliance.

One of the main things that stood out to me as far as possible concerns out on the trail was the use of T30 and T40 Torx keys for the rear linkage bolts. Now Torx keys are great but very few if any multi tools on the market have any this size should these come loose out on the trail. So, make sure these are tight whenever you are performing your maintenance. Either that or get some this size to through in the saddle bag (people still use these, right?)

As with any bike, contact points are always a point are always points of personal preference. I ride on a Prologo saddle on my XC bike, although in a different model and size and found the Nago X20 a little on the narrow side, but manageable for the ride time I was doing with a good chamois. The grips were a good size for me, although a little on the firm side. All these things are relatively easy and cheap to swap out or replace as they get a little tired from use. 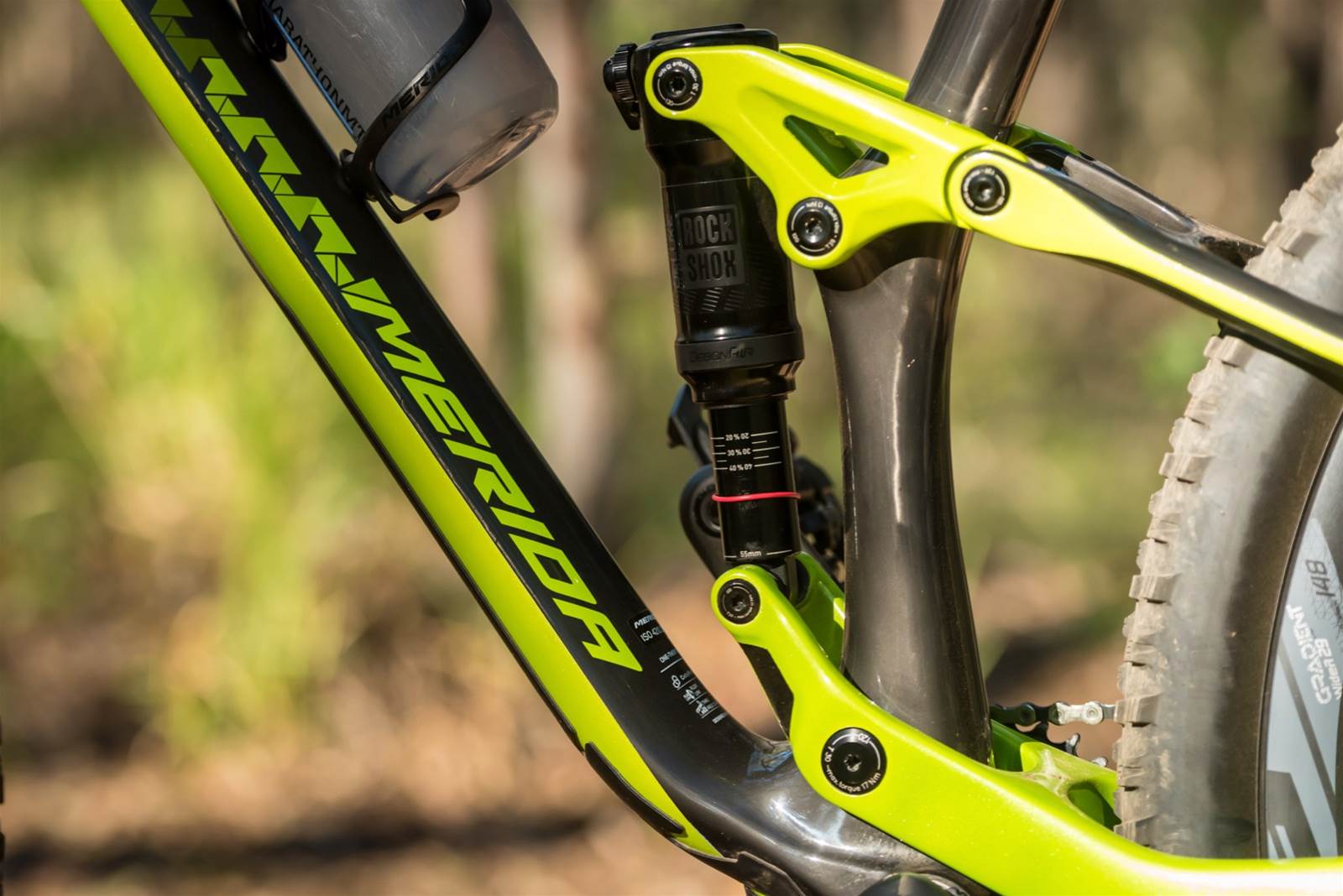 I had a small amount of the chain stay protection lifting before my first ride that I thought may give me some issues latter, but some time taken to smooth it down well and the adhesive held fast and did its job.

Claimed weight is 12.85Kg in large without pedals, and ours was 12.63kg without pedals – and with the included carbon bottle cage. Coming in underweight doesn't happen very often!