Fizik’s new Gravita line of clipless and flat pedal shoes are aimed firmly at riders who are in search of no compromise footwear which put fit and functionality above all else.

Developed by a team comprising of engineers and former racers whose goals were not inhibited by current trends within the market, the result is a line of shoes which have already been worn to multiple World Cup and World Championship podiums in their debut season by the Commencal Factory Race Team. They come in half sizes from EU37 to EU47, and my EU45 pair weighe 938g. The shoes have a Vibram sole and nylon rip-stop upper. They also come in Black and and Black/Red combination and sell for $280.

These shoes are light in hand, coming in at around 200 grams less than my usual pair of Shimano kicks. They’re also really stiff. The sole has very little give when trying to twist them in hand, with a feel that is more akin to an XC style shoe rather than a gravity shoe. The injection moulded, TPU-armoured toe box and heel cup are also both very firm, designed to provide safety to the rider. Adding further safety is the inner ankle protection to the medial tibia, like what is seen on some shoes from Five Ten and Shimano in a similar price bracket. 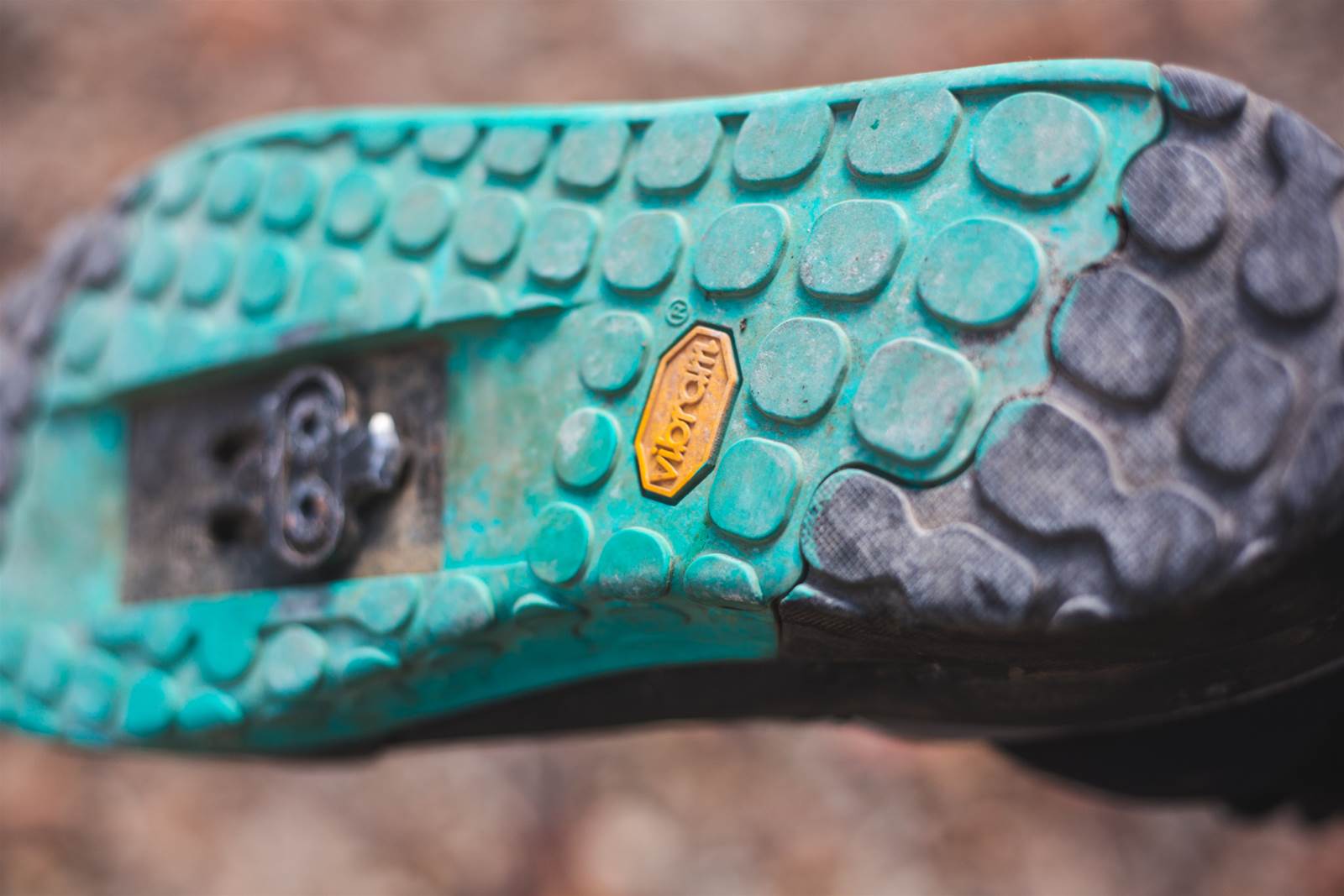 Rather than the typical mesh and TPU seen from shoes in this category Fizik have gone with rip-stop nylon upper. The easiest way to describe the feel of this material is that it feels like a reef shoe. Very light, very stretchy, highly breathable and with low levels of water absorption. While many would expect to see a BOA chosen as the closure system for a performance shoe at this price point, Fizik have chosen to go with their ‘Ergolace’ lace pattern which is reminiscent of a climbing or hiking shoe. This maximises tension of the upper across your entire foot. There is also a Velcro ‘Powerstrap’ at the top of the shoe to lock your heel in place and keep your laces out of the way.

Putting these shoes on is no two second affair - you have to tighten these properly. Due to the combination of a stiff sole and stretchy upper I felt it was key to have all the laces tightened just right, otherwise I could feel my foot squirming around under hard pedalling. Once fitted correctly, I could instantly notice the stiffness of the sole through the pedals – it felt as if every watt that my legs put out was being transferred directly to the bike. I also felt I had a touch more control of the bike through my feet. This was a pleasant surprise and can be compared to the difference of going from thick mushy grips to thin firm ones – without any of the arm pump. The cleat channel is wide and deep, allowing plenty of space to dial my SPD cleat positioning in to just how I like it with plenty of room to spare. 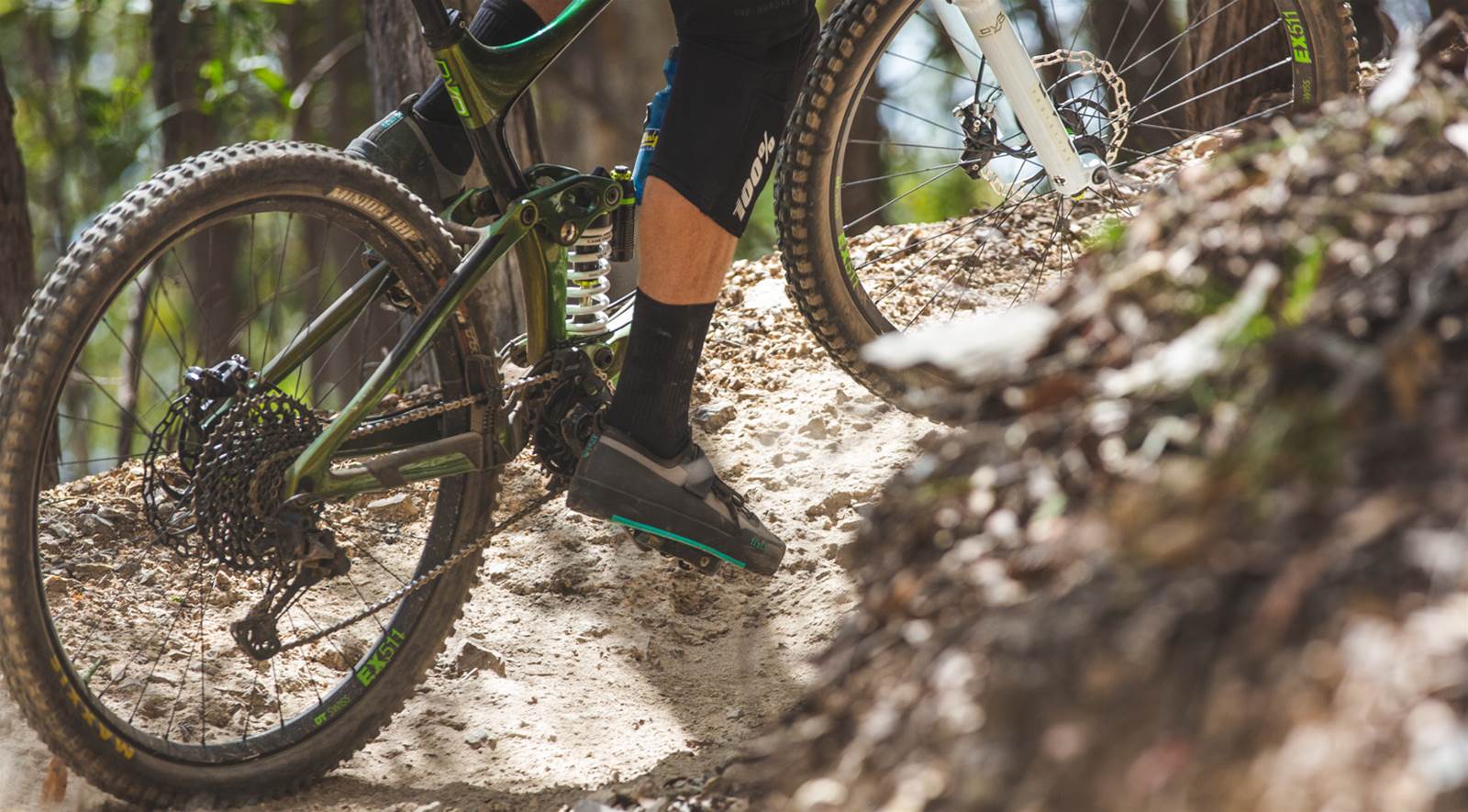 On the trail, thoughts of these shoes quickly dissipated – meaning they’re doing their job perfectly. I am a firm believer that any piece of kit is at its best when you simply don’t notice it while on the bike. I did have a few hard rock strikes to the toe box while riding in Thredbo which made me very thankful for the Gravita Tensor’s injection moulded lower and laminated, low friction scuff guard. The shoe did a great job of deflecting any hits, keeping my toes safe no matter how bad my line choice got on the infamous Cannonball run.

I typically feel like a bit of a baby giraffe when walking or hiking up a technical feature in clipless shoes but the Vibram sole provided plenty of grip both on the trail and on the platform of my DX pedals. I even managed to accidentally submerge my foot in some hidden bogs – revealing the benefits of the moisture wicking upper. These shoes are not absorbent at all, so they won’t turn into a boat anchor during a wet ride or multi-day trip or event. The Fizik Gravita Tensor is a real standout in world of gravity clipless shoes. While the styling may not be to the taste of some, I found their performance oriented fit, robust construction and light weight a winner… if only they made me descend like Thibaut Daprela! 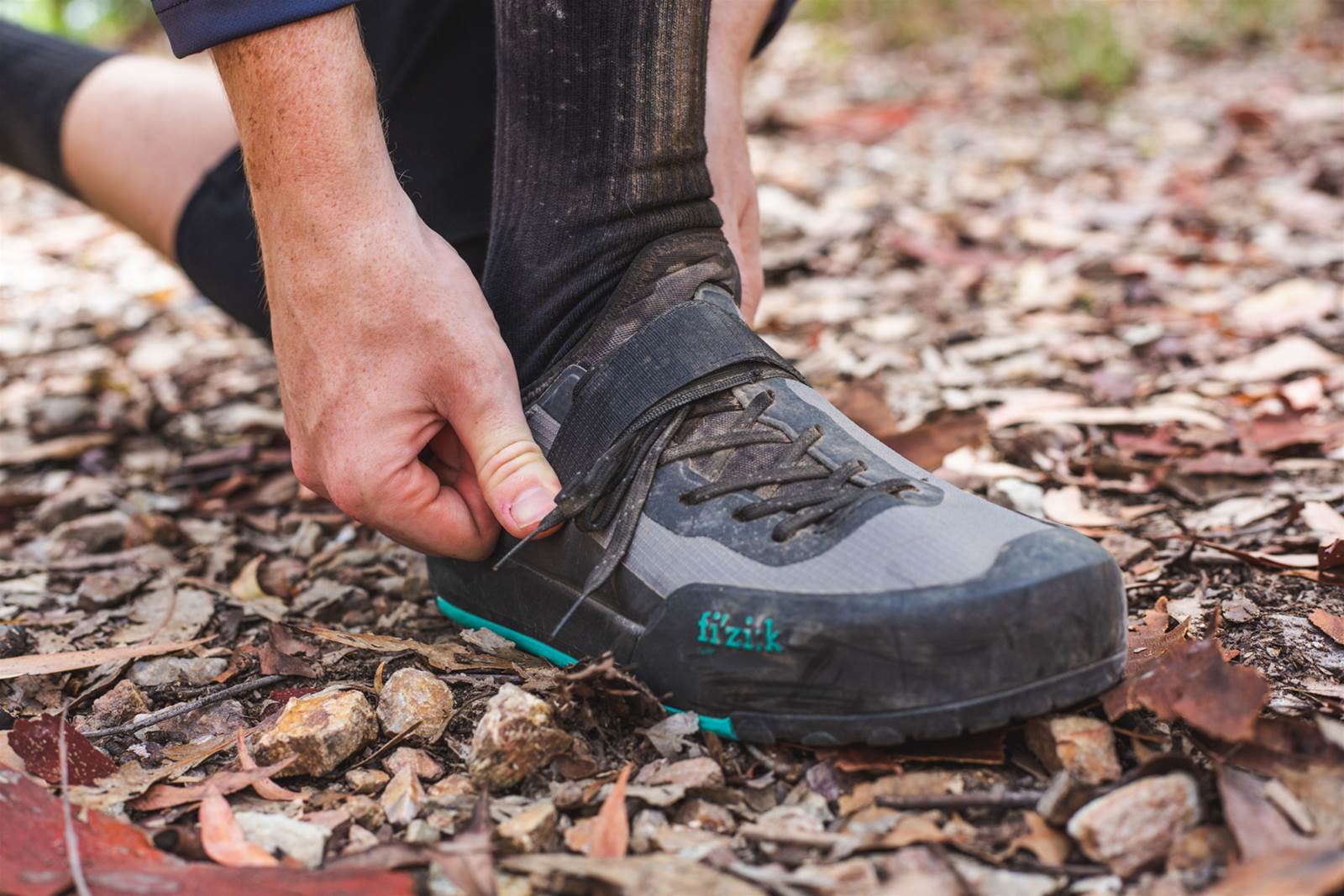