Ten years in the making and tons of fun out in the west!

The South West region of Western Australia has been exploding with great places to ride over the last decade. Locations like The Pines, Compartment 10, Linga Longa, Middle Earth and the Creek trails are considered some of the best places to fling mud into your mouth in the state.

With the recent release of the South West MTB masterplan and its goal to increase the network to over 500 kilometres, one could be forgiven for thinking that trails are sprouting up in this area just like the iconic wildflowers. Unfortunately this is far from the case and the success of the Dunsborough Country Club and Meelup Reserve trails networks is testament to the diligence and lateral thinking of a very special group of local riders who kept going year after year.

Read on, you now have a very good reason to stop off at Dunsborough on your way to the trails at Margaret River.

Ten years ago it looked so easy. Backing onto the town of Dunsborough was the Meelup reserve which had previously been used for a variety of uses - including borrow pits and dumping grounds. But as the town matured the locals enjoyed the area and with its high vantage over the town it gave stunning views to the sea. There was a network of informal trails in there and the local riders thought it would be good to formalise them.

Local opposition was entrenched and so the struggle began. In the 10 years it took to formalise the network an Adventure Race was established and became the largest event of its kind in the world, bringing millions of dollars into the local economy - only to move elsewhere, partially because of land access issues to trails for the MTB leg. Locals got desperate and talks began with the local country club and a partnership was struck with mountain biking joining the activity list inside the grounds of the country club.

Locals joined the country club and built 11kms of trails around the edge of the golf course. Interesting rock structures test rider’s nerves and balance, and in recent years a pump track and advanced jump track (think big doubles) has been added to the amenities (as well as croquet, tennis and bowls).  It’s not hard to see why this country club is a multiple award winner for excellence (and the beer is cheap too!).

With this development, Australia’s largest multi-day MTB race - the Cape to Cape - was able to use these trails as the finale to Stage 4 and the finish line on the club’s golfing green. The irony is that the 1,400 odd competitors are often so flogged after four days of riding that they struggle to appreciate the last 6km of sweat and singletrack to the finish line. Blasting down ‘Fireys Descent’ - a regional classic - would have barely registered for some fatigued riders.

If you’ve ridden these trails in the Cape to Cape, it is worth riding them again with fresh legs. Visitors are asked to pay $5 registration at the country club to access the country club trails (valid for several days).

The Meelup trails on the other hand were often accessed by parking at a gate off Cape Naturaliste Road, opposite Endicott Loop (although both networks of trails back onto each other). It was then a mellow ride up the fire road before a bevy of options off the ridge. The regional classic was ‘Brown Street’, a tight, engaging track that snaked and weaved down the hill and back up again.

In the recent redevelopment of this area by the club and professional trail builders, they have modified this classic and we’ll let the locals argue over their beers about the pros and cons. The modern Meelup trail network has been rebooted with 5+ trails and approximately 7km of trail, with talk of another 14km of the same being built in the near future.

It isn’t made with XC racing in mind. This is mostly machine built, wide flow trails with big berms, jumps and lots of rock structures. The rock structures here were always interesting and adding machines has allowed them to become a lot bigger. If you like the trails at Compartment 10 in Margaret River, then you’d probably like these trails, although advanced trails like ‘Happy Myles’ (named after one of the long time local MTB advocates, Myles Happs) do make you work to maintain flow with some challenging structures.

A new trail which has quickly cemented itself as a local favourite is ‘OMDB’ which keeps the flow and the speed better with jumps and pumps galore. Again named in salute of the struggle the locals had in getting these trails in, ‘OMDB’ or ‘Over My Dead Body’ refers to an opponent of the trails who insisted that was the only way they would be built. Despite my best journalist prodding, the locals wouldn’t tell me under which exact jump her body is buried. 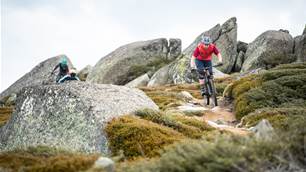 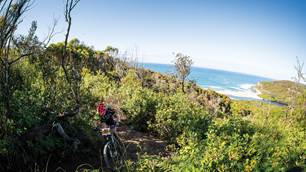 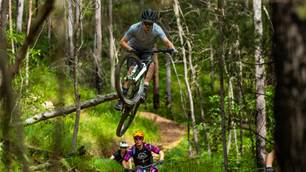