Bare Creek Bike Park is a brand new, progression focused bike park on Sydney’s Northern Beaches. The result of over 10 years of lobbying from Northern Beaches' riders alongside trail advocacy group Trailcare, Bare Creek caters to the airtime hungry crowd who’ve been sorely neglected in the harbour city. Finally, after a decade of hard work, this Dirt Art constructed masterpiece has trails to take you from your first time in the air to pro level jump lines.

As Bare Creek sits in a valley that was formerly a waste management facility, upon arrival the various trails are spread around you within a natural amphitheatre. The location soaks in the sunshine, and on our late afternoon visit the whole park was bathed in gorgeous sunset light. The afternoon light at Bare Creek is stunning.

The key aim of Bare Creek is to foster progression. As Matt Ward, a driving force behind the park through his involvement with Trailcare told us ‘You could go from someone who’s never hit a jump right through to the point where you wouldn’t be complaining about the size of the jumps’. He’s not wrong, as the park goes from fully rollable flow lines all the way up to the ‘Darcside Pro Line’, an intimidating line with jumps that require some serious commitment.

Whilst there’s some pretty big jumps at Bare Creek, there’s something for most mountain bikers with some riding experience. On our visit there were toddlers riding their strider bikes on one of the flow lines, a ribbon of immaculately sculpted turns. On the other end of the spectrum, a big group of teenagers were sessioning the ‘Zapper’ step up, which is more akin to a jump you’d see in a Crankworx Whip Off event than the suburbs of Sydney. 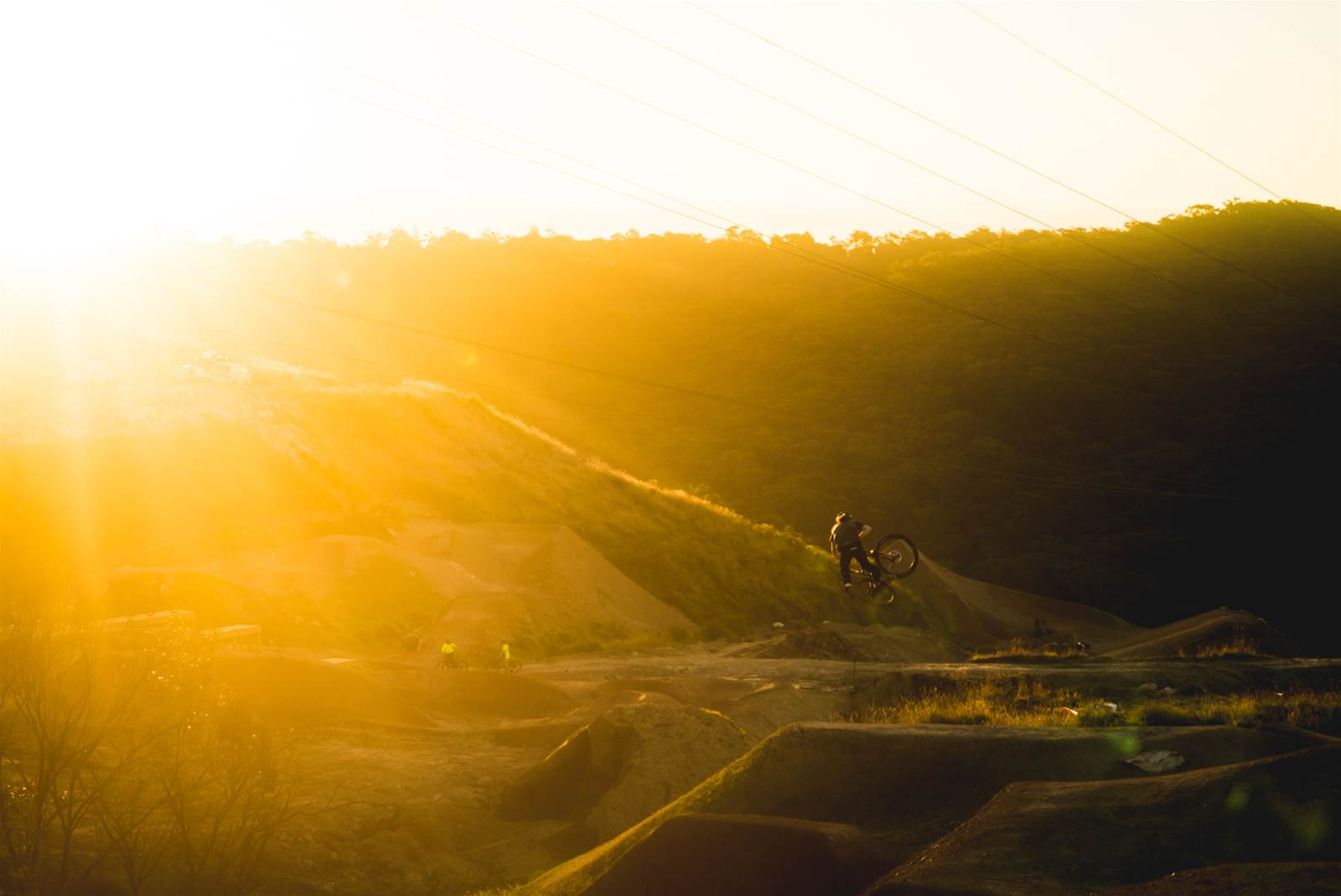 Whilst you could ride any kind of mountain bike on the trails at Bare Creek, if you’re lucky enough to own a dirt jumper or BMX, bring that along to session the asphalt pumptrack and ‘Dirt Pad’ dirt jump lines. Once again progression is the theme that shines through, with a row of dirt jumps going from rollable tabletops to steep doubles that guarantee maximum airtime.

According to Matt Ward, the aim is to build a Surf Lifesaving style culture around the park, with riders looking out for one another and a friendly vibe being extended to riders of all levels. On my visit this was definitely the case, with riders of all ages cheering on their friends as they worked their way through the jumps.

Whether you’re a keen jumper, enjoy stringing together clean turns or a pump track fiend, Bare Creek has something for everyone. This being said, the park leans more towards jumping progression. It’s good to see the old adage ‘hard work pays off’ is true in this case, as the hardworking crew of Northern Beaches locals, Trailcare, and Dirt Art have made something really special happen here. Bare Creek Bike Park is located in Belrose, on Sydney’s Northern Beaches. From Sydney’s Domestic Airport Bare Creek is around one hour’s drive, depending on the time of day.

Bare Creek is suitable for all levels of rider. This being said, Bare Creek is definitely slanted towards airtime and progressing your skills in the air. If you’ve got a Dirt Jumper or BMX it’s definitely worth bring those as well, to ride the awesome asphalt pump track and dirt jump lines. The pump track is an absolute cracker.

A trail bike will get you through most of the riding in the park, however an all-mountain or enduro bike would be more suitable on the bigger jump lines. Experienced bike handlers could get away with an XC bike on some of the trails, but an XC hardtail sans dropper post will probably limit your choices at Bare Creek. We’d recommend bringing plenty of protective equipment, as the progressive nature of the park gives you the ability to push your limits if you feel comfortable doing so.

Bare Creek features 1.6km of trails, which are designed to be sessioned. There are two blue trails, two black trails, two double black trails and a pro level jump line for a total of seven trails. On top of this, there’s the asphalt pump track and the dirt jump pad, which has four lines of dirt jumps spanning from beginner to expert. Both of the blue lines are rollable, but from the black trails onwards you’ll need to be clocking up the air miles to get through the lines.

The pioneers of Bare Creek are sticking to their Northern Beaches roots and want to create a Surf Lifesaving culture around the bike park. With the popularity of riding on the Northern Beaches booming, there should almost always be a friendly local on-site. They’ll be more than happy to point you in the right direction for your ability level, or tow you in if you’re unsure on your first run on a new line. As long as you're not dropping in at North Narra, beaches locals are normally pretty friendly!

The park will be open year-round but closes in wet weather so the jumps don’t get damaged. You can find the latest trail information online, which will let you know if it's open or not.

As the park is bathed in sunlight, it’ll be better to go earlier or later in the summer months as there’s no escape from the heat on the trails.

WHILE IN THE AREA:

Sydney’s Northern Beaches has a wealth of riding that’s almost the exact opposite of Bare Creek. The topography of the area means the trails are filled with massive rock slabs and ledgy sandstone climbs and descents, which are generally technical in nature. A quick look at Trailforks when you’re at Bare Creek will reveal a variety of options within riding and driving distance of the park. If you’re looking to cool off after riding, there’s a number of beaches within 20 minutes or so.

The local mountain bike club is the Garigal Gorillas, so named after the Garigal National Park that borders Bare Creek. Their Facebook page is the best place to go for information about ride days and Bare Creek updates.