Cairns, and Tropical North Queensland, have been in the mountain bike spotlight for years. So much has changed since the Mud Cows videos spawned a cult following in the 90s, but a few things have remained the same. Namely, the Kuranda downhill and Glen Jacobs.

In 1990, mountain biking was a different sport. The equipment was rudimentary and often experimental, trails were what you could find. But everything was changing. Everything was new. In a setting like Cairns, which is flanked by the Great Dividing Range, the terrain shaped mountain biking.

“Every afternoon we’d get our bikes and we’d push up a hill, we didn’t know there was a thing called cross country, we just thought mountain biking was downhill. You’d just push your bikes up and ride downhill,” says Glen Jacobs as we catch up after the highly succesful 2017 Mountain Bike World Championships. This was the second time the World Championships had come to the area – and trails like the Kuranda downhill are easily one of the foundation pieces that set the first Championship plan in action. There are only a few ways up the range, so it was inevitable that the focus would fall on Kuranda.

“I remember going up a track which was the Old Kuranda Road in a motorbike race many years before. It was all overgrown and everything and I said ‘I think I know where there’s a track that goes up near the lookout, so we drove to the lookout,” explains Jacobs. If you have ever driven up the Kuranda Road then you’ll know of the lookout. It commands an uninterrupted view across Cairns and south to Walshs Pyramind.

“I was with a bloke called Peter Blakey - and he and I got to the top, and we looked over the edge and it was just grasses over our heads and he said ‘there’s nothing going down there, you can have that’ and off he went.”

Mountain biking needs pioneers and it’s clear that Jacobs required a little bit of pioneering spirit at this point.

“I said ‘I’m right, I’ll just walk’, and I got lost, and I did that for a couple of weekends until another bloke came and helped me.” Daniel Pradow was on hand to help. Pradow worked in a couple of shops in town. “He said ‘We’ve gotta find this thing. It’ll be great for us.’ And we did. We found the exit.”

“And we just started clearing it, and that was the start of Kuranda. That would have been 1990. Probably the first couple of months in 1990. And we started shuttling: up and down and up and down, and we didn’t ride anything else then.”

“Within six months we’d held two races on it, and started looking for other ones.” Cairns isn’t short of a hill, and the road to Lake Morris and Copperlode was quickly explored. “On Copperlode, we found a trail, and all these other ones that came off the track, we cut them open and within a year and a half I think we had 14 downhills in the area.” The saying “ride what you build” is often bandied around, and that’s something that still rings true up north. It’s no surprise that Jacobs now heads up one of the pre-eminent trail building companies in Australia. He and many others have been doing it for decades.

“so many more people have a go at putting extra tracks in and things like that, and that’s part of the culture, you know?” There are tools beside the trail at Kuranda, constantly on hand for any trail maintenance. Even when we rode the trail for the images in this feature, the riders stopped to fix up some sections. Kuranda is special, it was the first trail and it gets treated differently How many runs can you do of Kuranda?

Mick Hannah holds the record, and he confirmed how it came about after the World Championships in 2017.

“It was 41 runs, actually. We started at 7:30 in the morning and rode until 6:30 at night. We had lunch packed in the car so we didn’t have to stop. The reason it came to 41 is because at the beginning, or what started that day is I’d done 25, and my friend Miles Mead had done 21, so we decided we needed to put the record a bit out of reach. My goal was to do 30 that day, we ended up doing 40. There was another guy with us, Shane Harding, and he got a flat in the middle of the day and we left him. So he’d done 39, I’d done 40 and we couldn’t let him stop at 39.” And so the record stands – 41 runs of the Kuranda downhill in one day 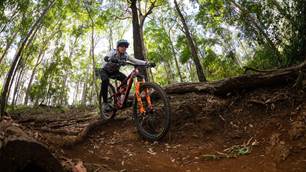