Cruising to the coast

At the halfway point, the character of the trail changes, not only in the surrounding forest but also the trail itself. The soil has graduated from the deep brown hero dirt to light grey, and giant man ferns have been replaced by imposing granite boulders that dwarf riders by comparison. 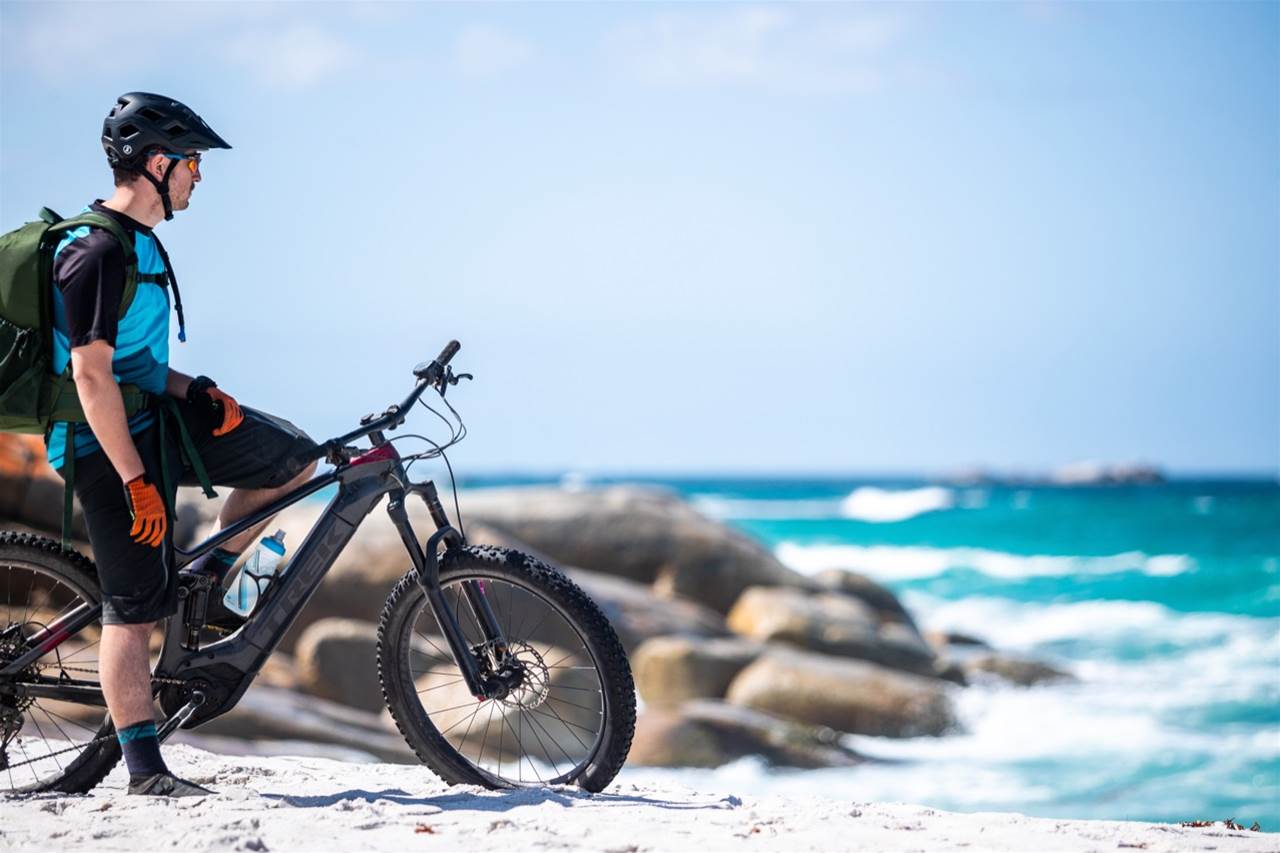 The gradient has moved back into the realm above zero; but it's only in the single digits gaining a little over 200m of elevation over the 10km, it’s more of a false flat than a climb — still, I'm happy to be on an eMTB. With the increasing rockiness of the landscape the trail does get slightly more technical with a few small rock gardens and rollovers — don't worry, there are B-lines around everything so that 30km into your ride, there aren't any trail features that require major amounts of brainpower.

"I see the sea," I yelled up to Nick as we worked our way up the final pinch. The trail contours up a ridgeline and skirts around the edge of Mount Person; as you come over the crest of the range, the electric blue water of Binalong Bay peeks through the trees. 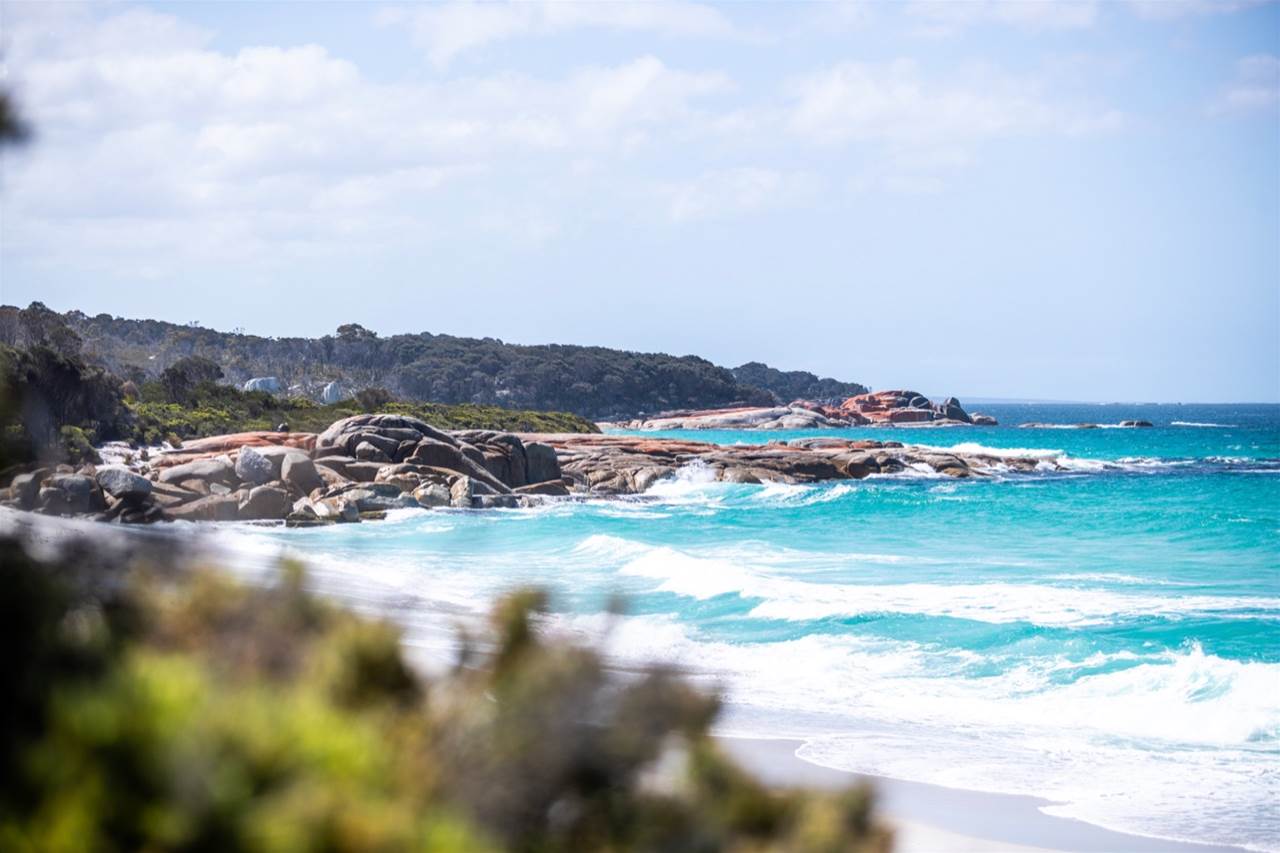 The thing I love about these long-distance point-to-point backcountry trails is the final descent clouds your memory of any suffering you've endured to get there. Yes, we were riding eMTBs, and those who rode the trail unassisted burned considerably more calories to push themselves to that final descent, but that doesn't mean that Nick and I didn't work through our own hardships along the way.

Below the sparse canopy of eucalyptus trees, the trail opens up carving wide arcs down the hillside, the speed increases and there's ample opportunity to put air under your tyres. The further you descend, the sandier the trail becomes, and the smell of the sea breeze works its way to the front of your consciousness. 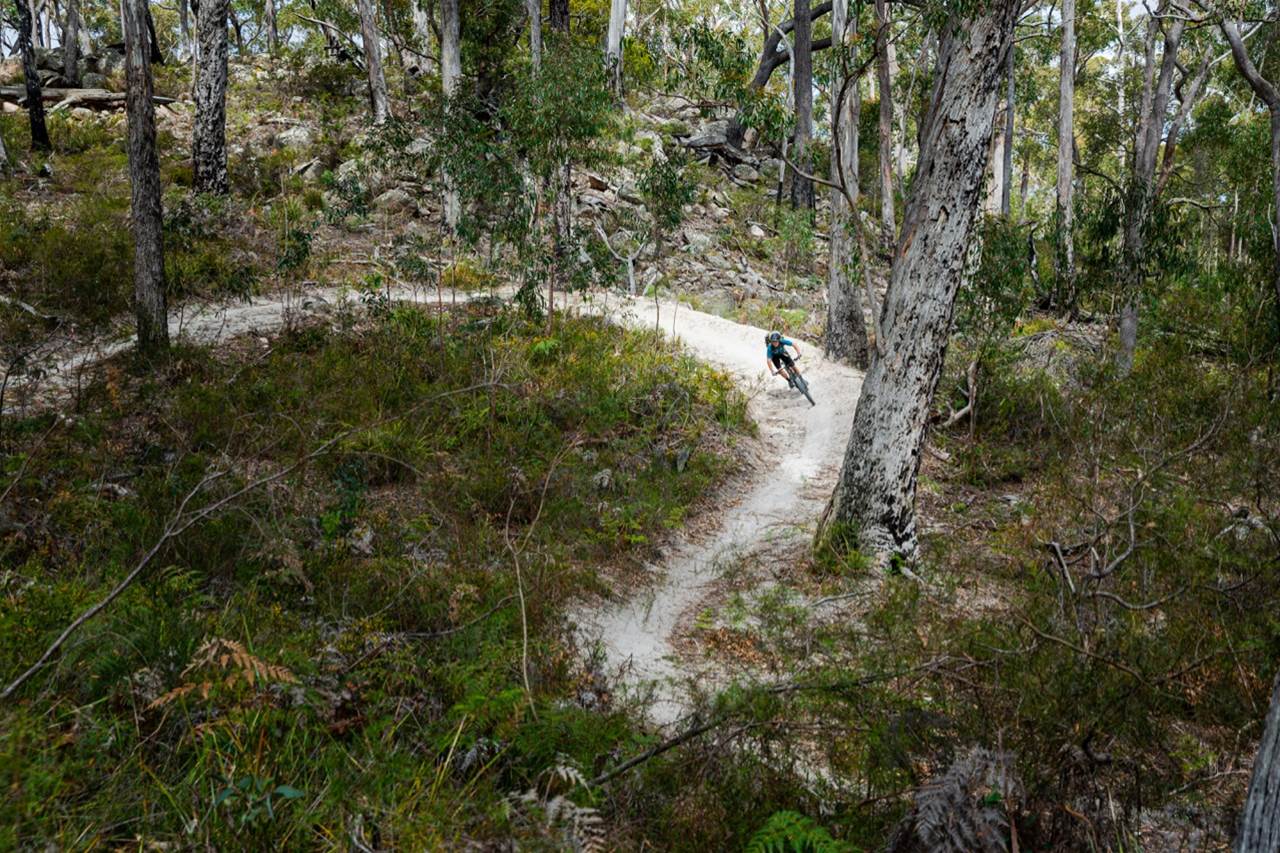 The final trail marker confirms that you're only 1000m from the beach, and the singletrack provides a fleeting glimpse of Swimcart lagoon and a preview of your final destination. The singletrack ends abruptly on the side of a gravel road; keep following the sound of the waves to find the reward for your effort — the pristine white sands of Swimcart beach. The crystal clear water looks inviting, but it is anything but warm — after four and a half hours a refreshing dip is probably the best way to cap off what is a truly epic adventure.

Accessing the Bay of Fires Trail requires a shuttle ride up to the Blue Tier. If you're based in Derby, Vertigo MTB, Premium MTB Transfers or Mad MTB will drive you to the top, and collect you from Swimcart beach. From St Helens, Gravity Isle’s depot is a stone's throw from the center of town; they also look after the Artnor Lodge which backs onto the shuttle pickup — you can literally roll out of bed and onto the shuttle. Mad MTB also offers pickup and drop off in St Helens. We rode the Bay of Fires trail in mid-November. The weather on top of the Blue Tier warranted a light jacket as we were waiting to set off, but those were quickly packed away once we got going. November to March sees average temperatures hovering around 20C, during the winter you'll need warm clothes to combat the low teens and single digit temperatures.

According to the Bureau of Meteorology, precipitation is pretty regularly through winter with a peak in August. Keep in mind, we are talking about Tasmania, so don't leave home without a rain jacket.

If you're going to make your way to Tasmania, you'd be silly not to stop into Derby for a few days — if you fly in to Launceston, you'll have to drive through Derby to get to St Helens. It's worth checking out the new St Helens trails while you're in town.

There are trails for the whole family, with the difficulty increasing as you venture further from the trailhead. From the trailhead at Flagstaff, make sure to catch a shuttle up to Loila Tier to check out the top of the network.

Flagstaff is only 3.8km from town and it's an easy ride up the Town Connect Trail to the network, so you can leave your car parked at your accommodation. Where to grab a beer

While you're in St Helens make sure to grab a beer at The Social. It's a food truck meets beer garden, that's well stocked with local craft brews and mouthwatering street food — the perfect way to replenish calories sacrificed to the Bay of Fires Trail.

This is a wilderness trail. If you run out of water or food, or have a mechanical along the way you are a long way from any help. Don’t be that guy who makes the news for being unprepared, bring a backpack, a hydration bladder, lots of snacks and any spares and tools you might need. There is a bright orange trail marker every kilometre, so if you do need to call for help, you can communicate your approximate location. That said, unless you have Telstra or Optus service is spotty.

Protip: If you're on the Optus mobile network, as you drive into St Helens your phone will not pick up service. Give it a restart and viola, you’re connected. We don’t know why it works, but it does. 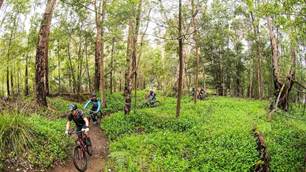