We find out what actually goes into designing the bikes you know and love!

Ridden to two consecutive Enduro World Series overall all wins, Nukeproof’s first ever carbon frame, the Mega 275c, started life as a side project designed to conquer the Megavalanche. “The original concept of the Mega came at a time where we were discussing with CRC team manager Nigel Page the potential to sponsor the race team with frames as well as components. The only issue was we didn’t have any frames,” said Nukeproof Marketing Manager Rob Sherratt. “In the background Dale McMullan (Engineer) and Michael Cowan (Owner) had been developing a bike to take on the Megavalanche. They had reached the limit of what they could modify on their trail bikes and developing their own frame from scratch to blend the best of their downhill and trail bikes (all mountain/ Enduro wasn’t really a category in 2008).”

While Nukeproof bikes have come quite a long way over the years from the industrial looking tanks from the brand’s infancy, the Mega, as with all of Nukeproof’s bikes started with a pencil and pad of paper. “The overall packaging of the bike will always come from the linkage points, which Dale designs to give the characteristics he was looking for from the bike. The sketching of the general look of the concept is all done in house by our graphic designer Enrique Repellos,” says Sherratt. “This is generally still the process for all new products to this day. Dale will design/engineer the bike and the linkage with Enrique on the sketch pads. However, we now have a 3D modeling department to help bring these to life, test and engineer the bikes prior to production”

“The frame design starts around 3D linkage/suspension points, then wheels, geo, components, this way we can ensure things will fit and the first prototype will work, we also do a lot of FEA testing to ensure the design will be strong enough to pass ISO and ride testing, this saves a lot of time in the long run,” he continues. 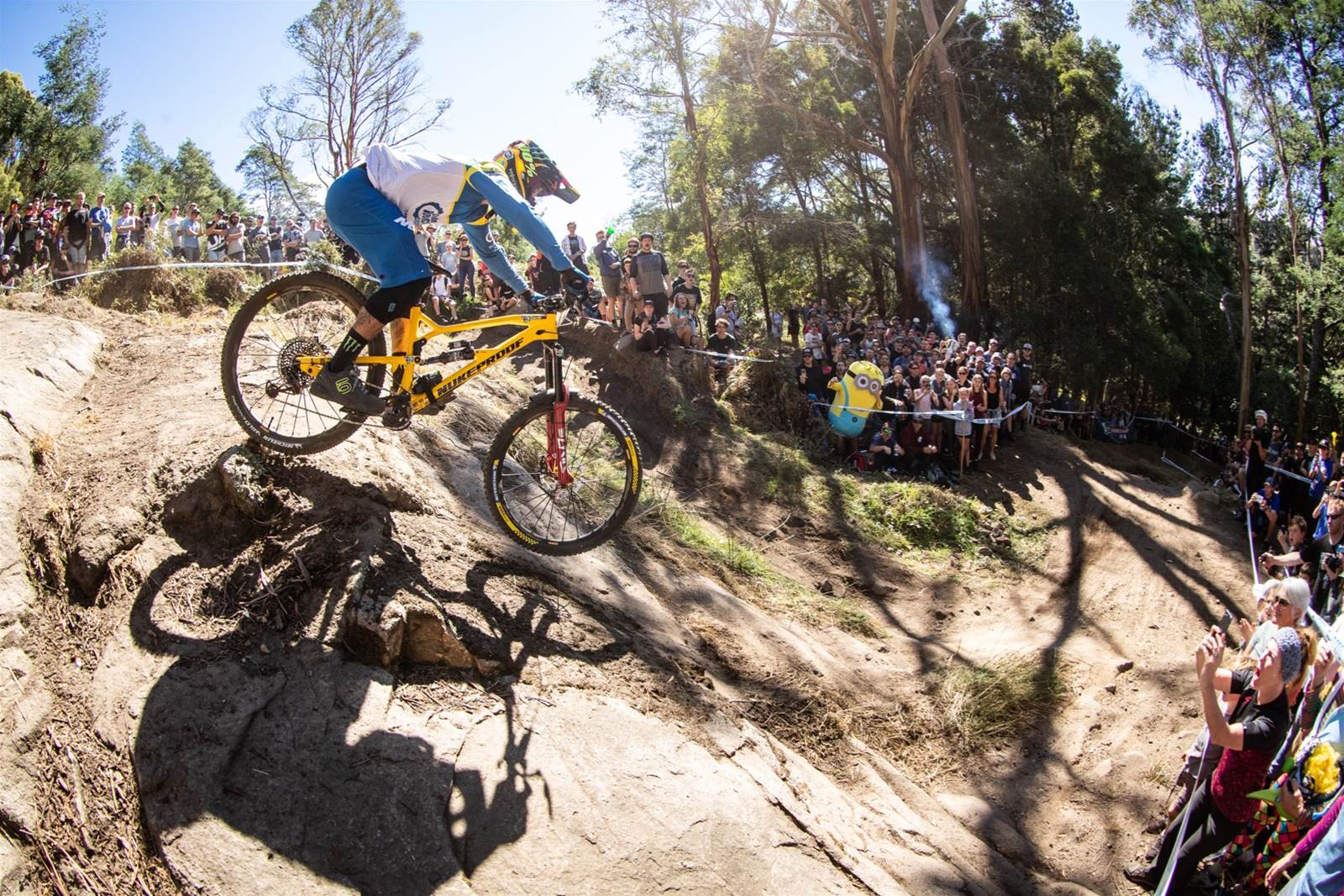 With Nukeproof being a smaller brand, they run a tight ship and involve its sponsored athletes from the outset.

How much does Nukeproof involve you in the design process?

“They actually talk to the team and us riders a lot for any suggestions on what we want the bike to be like or the characteristics we would like to see in future bikes. They take our feedback onboard so that’s awesome.”

From the 2016 model, what changes did you want to make to the frame? What worked from the 2016 frame and what didn’t?

“I thought the frame was actually already pretty good but we changed the head angle to suit a 170mm fork from the previous 160mm. They incorporated the metric shock which increased the rear travel slightly and also made the rear end work a lot more freely on the smaller bumps. They also worked hard getting the carbon model just right.”

When you first got your hands on the new 2018 bike what was your first impression? As you spent more time with it what differences became apparent to you in terms of ride characteristics?

“It was obvious straight away how much plusher the suspension was, it just plows through anything. The bike blows me away being a trail bike and how well it handles any terrain you throw it down. The Mega 275c is the Nukeproof’s first carbon frame, I didn’t really push for it at all, I was really happy with how my aluminium bike handled and rode. I was a little sceptical as a previous experience with another company I didn’t gel with the carbon bike they built. When Nukeproof had prototypes of the 2018 frames they sent me an alloy bike and a carbon bike to ride and test and I preferred how the aluminium bike handled. I gave my feedback to Nukeproof and after a couple of different versions of the carbon bike they got it handling awesome and ever since then I’ve been racing it. I think it’s easy to over build carbon fames so it was awesome to see and help the guys to keep trying to find the perfect balance and feeling in the bike.”

Though it may have started analogue, the latest Mega launched in October of last year is anything but. According the Sherratt, the brand felt they had a pretty good jumping off point with the 2016 bike; there weren't too many geometry changes bar some scaling between the larger sizes. Many of the improvements Nukeproof was looking to make came through implementing new technology like Metric shocks and bosst rear spacing. The biggest however was jumping headfirst into carbon fiber.

“This was our first carbon bike with the Mega 275c...we had to ensure that the 275c had the performance benefits over its alloy counterpart and was not just to be an aesthetic project,” Sherratt said. “Obviously, it needed to be lighter, but also comfortable to ride, not too harsh without loss in front triangle stiffness. We looked to offer even better performance downhill and also improved pedalling performance over rough ground.” Being that the Mega 275c is Sam Hill’s bike of choice, it’s no short order for Nukeproof to deliver the best possible platform for the EWS.

“It’s a balance between strength, weight and cost. Carbon is generally less stiff than alloy so we need bigger sections just to match the strength and stiffness. If desired, you can achieve radical shapes but generally it’s at the cost of weight and extra time to hand finishing the carbon where the carbon has difficulty filling the corners of the mold,” Sherratt said. “These can be weak spots with excessive resin or air pockets that may need filling. At the end of the day, the bikes are performance frames so how we achieve the maximum strength/weight balance is the main factor before aesthetics.”

“Alloy is more cost effective initially, but your design needs to consider if the tubes are to be hydro formed or mechanical formed, this will have a big impact on tube cost and tooling cost.”

Carbon of course brings a whole pandora's box of variables, but the other area where Nukeproof sought improve the anti-squat performance. “We had high levels of anti-squat (very trendy at the time) between 117% and 132% depending on gearing,” says McMullan. “For the current Mega we wanted to un-restrict the suspension from the chain by dropping the anti squat figures, we were also able to control the anti-squat % for climbing and descending.

“(On) the old bikes, anti-squat increased when descending in high gears and reduced for climbing in lower gears (very common), this didn’t make sense so with the new Horst link design we were able to flip this, so now the anti-squat drops for descending and increases for climbing,” he continued.

Like with the team at Norco, just because the latest Mega 275c was just launched late last year Nukeproof’s engineers are already hard at work looking at the next version. Sherratt and his team didn’t give too much away about their plans for the new bike, they did say they are examining the boundaries of reach, and like Burnett have been riding one frame size up to see what's possible—McMullan says he has to cut the seat tube to accommodate his short legs.