The Devlin Oisin is a custom full suspension trail bike made here in Australia.

The Devlin Cycles Oisin is a bit different to most of the bikes I review for AMB. There’s no range of models I can tell you about depending on what your budget is and what spec you’re after, in fact the Oisin is the only mountain bike offered by Devlin (for the time being)! That’s because the Devlin Oisin is a custom steel full-suspension mountain bike. It’s also crafted right here in Australia in South East Queensland. We're riding the first prototype of the Oisin.

Sean Doyle is the man behind Devlin Cycles, and his expertise in fabrication and engineering lend themselves perfectly to building his range of Devlin bikes. He’s been handcrafting steel bikes since 2014, and whilst the Oisin is the newest bike he’s added to his offerings, he also makes the Gibraltor Road/Gravel bike, a classic road frame, and fully custom offerings in between.

The goal with the Oisin is to offer entirely custom geometry, however the prototype I’ve received features a long reach (488mm) paired with 440mm chainstays, a steep 76.9-degree seattube angle, and a 66-degree head tube angle. In the travel department, the Oisin pairs a 150mm fork with 140mm of rear travel, and on a couple of rides thusfar has felt right at home on Newcastle’s undulating trails. The Oisin's geometry is aimed at all-round trail performance.

In terms of the tubing selected for the frame, Sean choses to work with premium Columbus tubesets for most of the frame, only deviating in the chainstays, where he opts for thicker 4130 chromoly. I’m no steel frame expert, but the visual construction is top notch, and the bike felt comfortable from the get go, which is always a good sign. The parts of the frame that aren’t built by Sean include the rocker link and the paint. Sean has experimented with a few different rockers, and the one on the bike I’m riding is from a Trek. Production models will come with pressed metal rockers. Sean has also played around with different shock mounting points to test different levels of progression and is happy with the most progressive setting on offer on the bike I’m riding. 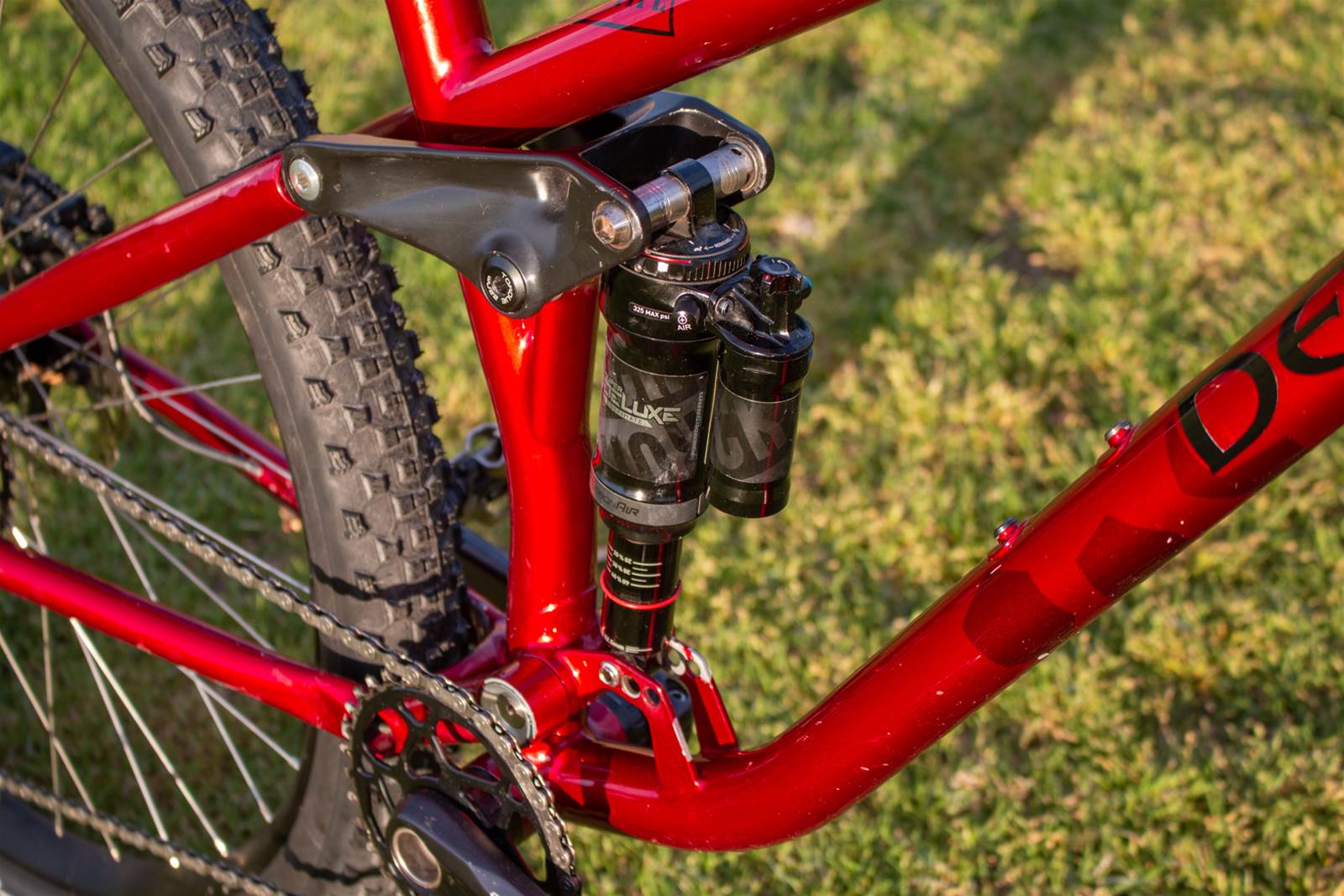 The Super Deluxe Shock is driven by a Trek Rocker Link on this prototype.

The gorgeous two-tone paint job is the work of Wallis Paints in Brisbane, although Sean says he’d probably recommend a powder coat paint job to withstand the abuse mountain biking dishes out on paint. The paint job on the Oisin is a stunner.

There’s plenty of little details to dig into with this bike as well as Sean’s plans for the future with Devlin, but first I need to rack up some trail time. Keep your eyes peeled for a full review in AMB #193, which goes on sale on December 6th. The details on the Oisin are well thought out.