Sundays are for racing

Sunday was a bluebird day. As the early morning fog lifted, it was clear that the whole valley was buzzing. This was probably helped by the fact the normal population was expanded about 1000 fold, and that people were here for one reason – for the love of mountain biking! Stage 2 saw riders tackle Detonate, and it was the start of a long day for everyone. After negotiating the rocks (and crowds!) of Detonate a long liaison back towards the Black Stump and the Snig track followed, before Stage 3 which ran into a liaison straight to Stage 4.

And as Stage 4 was Return to Sender the party moved to the base of the stage, lining the trail 10 deep in places. Beers were served and the crowd was loose. A bomb hole was forming in one of the final corners and in the dust riders were hitting heads on bars, burping tyres and letting it all hang out for the finish of the stage. Rowena Fry won this stage but didn't know it at the time – keeping her phone in the village so she raced free from distractions. As riders went to the pits before the final two stages, the village was eerily quiet. The wheel destroying stage known as Shear Pin and the crowd favourite of Trouty were the final two stages. If you left it late to get up onto Trouty you had no chance, and spectators were lining the road side for a view across the creek to the trail as it cut across infront of the famous painted trout.

Riders were streaming down, as the EWS 100 riders came first, then the riders in the main EWS event. Standing at the bottom of Trouty, as the calibre of riders moved up towards the top ranked elite, the final stairs moved from being a rough finish to a large step down gap. The final stage was short and intense, and to be finished was clearly a huge relief and buzz. Anita Gehrig finished the stage, and was heard commenting to a rider nearby how much she loved it. She was really happy that the EWS came back to Derby.

“It was so good to come back and everyone is stoked on bikes. There are so many people here and the Aussies went totally crazy. It's a great atmosphere. I wish I had a bit of a better racing time, but you know... I still had a god time and I feel really lucky to be travelling the world and doing what we do. And Tassie is the stand out, for sure.” And although the Blue Derby trails are a little more manicured than what they might race in other rounds, Gehrig is certain that is what makes the series what it is. “It makes the EWS. Europe is like chunk and gnarly, and this is just different. Here we have bike park trails and it is fun!”

“I had an absolute ball out there, the tracks are so much fun! I actually drove here (on the ferry) and being in your own country, with your own food, it's a pretty lucky experience for all us Australians.” “I really like the social side of enduro. You get to ride with people the whole day, and then turn it on at the start line. Even so we all encourage each other when we're leaving the start gate. And the jumps. I dig the jumps.” “That was epic. I thought I was just going to cruise Trouty. But I treated it like a downhill race and went balls out down the big open rock and then you can't really stop once you compress into the crowd. It was a massive crowd- it kinda changes your run a bit. It's a whole new environment. That was epic!” “I've had a pretty clean day, but my chain did fall off through Shear Pin rock garden. The clutch was flapping around so it came off the bottom. I can confirm it didn't come off the pedal cleat chain guide. I was pretty gutted about that, I think I got 7thin Stage 4, so I'm stoked.” 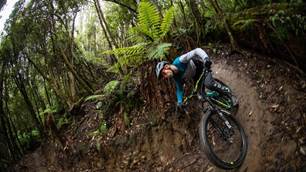